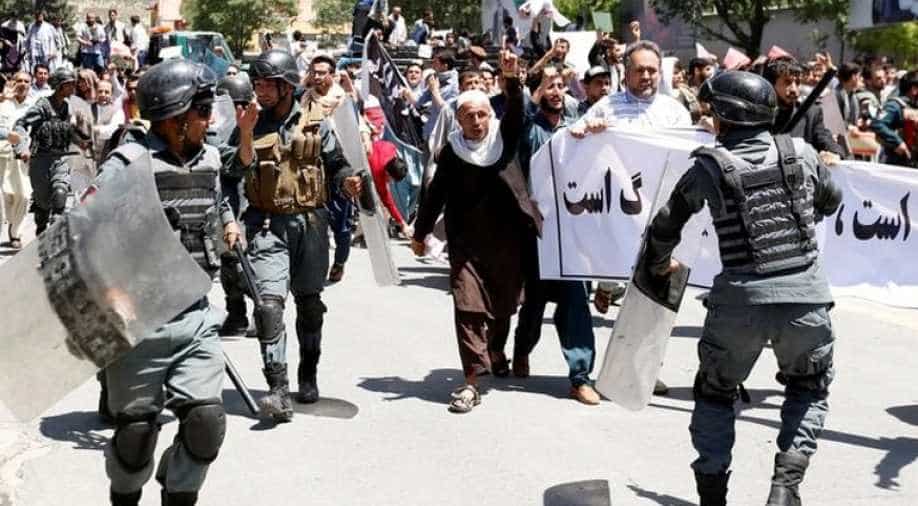 A protest in Kabul turned violent and left seven people dead and at least ten injured.

This morning, two days after the deadly attack which killed at least 90 people and injured more than 500, people took to the streets of Kabul to protest against the deteriorating security scenario in the country.

The Afghan police initially used water cannons and tear gas to block the protest and then resorted to automatic gunfire into the air. A journalist from the Afghan media TOLOnews, said that protesters pelted stones against security forces.

It is still unclear how the protesters have died, but sources on the ground said that police forces started firing live bullets against the crowd.

Angry protesters are trying 2 make into @ARG_AFG where they are resisted by firefighters. Police have reportedly detained many protesters pic.twitter.com/QqTU9UZO2G

According to Reuters there were approximately 1,000 people carrying pictures of victims.

TOLOnews said that protestors were chanting slogans against the government and its two main leaders, President Ashraf Ghani and CEO Abdullah Abdullah. A participant was holding out of a car window a banner reading "Ghani! Abdullah! Resign! Resign!", along with a picture of bloodstained children.

Demonstrators, most of whom are residents of Kabul, criticised the government for not being able to secure the country and assuring safety for its people. They demanded the resignation of the head of the National Security Council and of the National Directorate of Security.

Afghanistan's capital city has lately witnessed an increasing number of attacks and memories of relative peace are quickly fading away. Wednesday's attack happened in the heart of the city where several embassies are located.

The fact that the explosive-laden sewage tank managed to cross security checkpoints raised immediate concerns on the effectiveness of the safety measures active in the city.

Lack of security is becoming perhaps the most pressing issue for the Afghan government, which is losing ground to a renewed Taliban offensive. According to the US top commander in Afghanistan, Lt Gen John Nicholson, the central government controls only 60 per cent of the country.

The overall situation could deteriorate further if the Afghan government decides to go ahead with its decision of hanging as many as eleven convicted leaders of both the Taliban and the Haqqani network, which President Ghani believes to have masterminded the massacre. Anas Haqqani, operational leader of the namesake organisation is not among the prisoners to be executed.

Retaliation is an integral part of the Taliban history and they are likely to react if the government decides to kill members of their movement.

The Afghan national army and the country's security forces struggle to oppose the insurgents, opium production is increasing and the US and the NATO decided to increase their presence in the country. President Ashraf Ghani is facing the most difficult moment of his presidency, gripped between a growing discontent and the necessity of foreign aid.