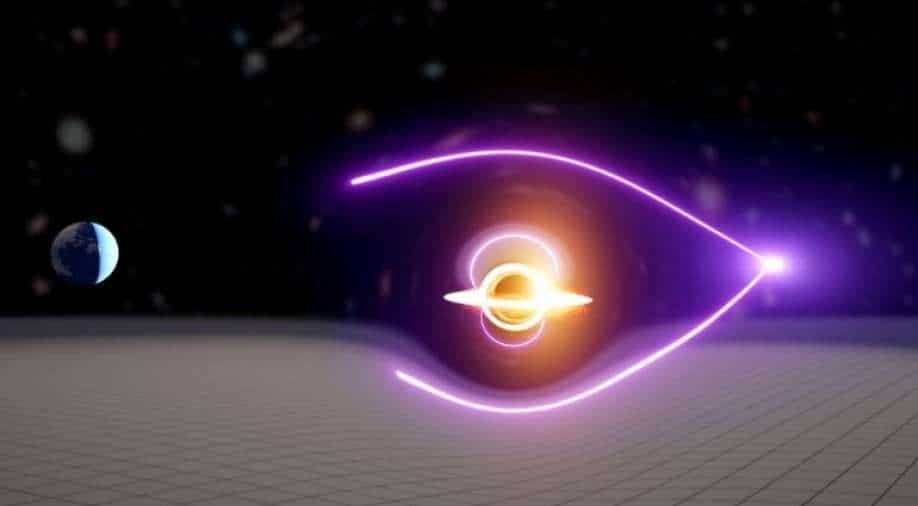 The newly detected 'goldilocks' black hole, about 55,000 solar masses, could be a missing link between these two extremes, scientists suggested Monday in the journal Nature Astronomy

Scientists have reported the discovery of a rare, medium-sized black hole that may help answer one of the more tantalising questions in astronomy: how do their supermassive counterparts come into being?

There are two well-known sizes of black hole, at one end, so-called stellar-class ones which are typically three to ten times the mass of our Sunand at the other, supermassive ones, found at the centre of most galaxies, including the Milky Way, which are millions to billions times heavier.

The newly detected 'goldilocks' black hole, about 55,000 solar masses, could be a missing link between these two extremes, scientists suggested Monday in the journal Nature Astronomy.

Up to now, only a handful of intermediate-mass black holes, between 100 and 100,000 solar masses, have been detected, and none have been squarely in the middle of that range.

A black hole is a celestial object that compresses a huge mass into an extremely small space. Their gravitational pull is so strong nothing can escape them, not even light.

Stellar-class black holes form when a dying star collapses, but astronomers have yet to figure out the origin story of the larger, matter-eating monsters.

"How do we get so many supermassive black holes in the Universe?" asked co-author Rachel Webster, a professor at the University of Melbourne.

Senior author Eric Thrane, a professor at Monash University, said the newly discovered black hole "could be an ancient relic, a primordial black hole created before the first stars and galaxies formed."

"These early black holes may be the seeds of the supermassive black holes that live in the hearts of galaxies today."

The new specimen was observed indirectly thanks to a slight deviation in light from a stellar explosion in the early Universe, some eight billion light-years distant.

Using a technique pioneered by Webster, astronomers analysed thousands of these gamma-ray bursts -- caused either by the violent collapse of a star or the merger of two stars -- looking for signs of gravitational lensing.

This occurs when an object -— in this case, the intermediate black hole -- acts as a lens and fleetingly bends the path of the light as it travels toward Earth, such that astronomers see the same flash twice.

While Thrane, Webster and lead author James Paynter, a PhD candidate, were able to measure the mass of their intermediate black hole with precision, they could only speculate on how it was formed.

It could have been forged from the merger between two lesser black holes, as was true for another, much smaller intermediate black hole discovered in May 2019.

Alternatively, it might have been born as a stellar-class black hole and slowly accumulated mass as it sucked matter into its maw.

"But this is a slow process," said Webster. "It is hard to grow supermassive black holes from a solar mass seed over the age of the Universe."

A more likely scenario is that their discovery "was born that way," she said. "This could provide the answer."

The authors think that there are about 40,000 intermediate black holes in our own galaxy alone.

The gravitational waves that can bend light -- allowing for the detection of black holes -- were first measured in September 2015, earning the lead scientists a physics Nobel two years later.

Albert Einstein anticipated gravitational waves in his general theory of relativity, which theorised that they spread through the Universe at the speed of light.