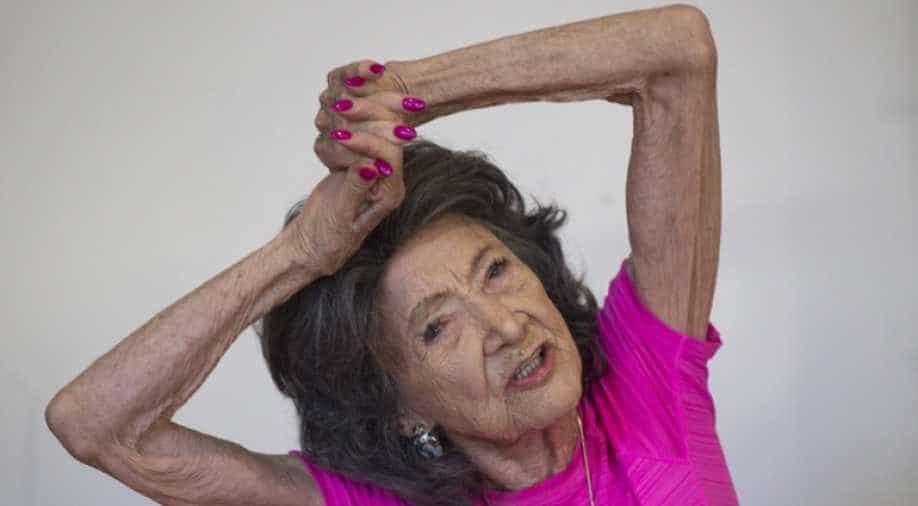 Tao Porchon-Lynch was born in 1918 at the end of World War I in India. When she was 12, she met Mahatma Gandhi and participated in his salt march. Photograph:( AFP )

She is the 'World's Oldest Yoga Teacher' who, at age 98, still teaches five classes a week. But above all, Tao Porchon-Lynch is a poster child for health and positivity in a world obsessed by wellness and longevity.

The former model and Hollywood contract actress -- who earned her title from Guinness World Records -- still has a delicate, slender physique.

Tao, as everyone calls her, grew up in India and lives in the New York suburbs, travelling the world attending yoga retreats. Stylish and fashionable, she zips from her Hartsdale home in Westchester County to the studio in a Smart car.

Once in the studio, she happily demonstrates yoga poses, even if she sometimes calls on one of her dedicated students to show off others.

But more than yoga, she imparts a zest for life that has sustained her through nearly a century of existence, marked by encounters with the likes of Gandhi and Marlene Dietrich.

"Don't be afraid," she tells her class. "Don`t let others tell you what you can't do." She cautions her pupils against giving in to fatigue.

"Breathe, feel this life force within you."

"I am doing things that I never thought possible," says Julie Ann Ulbrich, 52, who has been coming to Tao`s classes for eight years.

"If she can be 98 and still driving and still living on her own and doing asanas like this, it gives me hope."In a Western society increasingly determined to ward off the onset of aging, Tao`s bracing cocktail of longevity and practical spirituality has made her a celebrity with an avid online following.

She is even a sponsored athlete for Athleta, a brand of women`s yoga clothing and active wear owned by Gap Inc., which put her on the cover of its latest magazine.

"Look at the trees. The trees are hundreds of years old, at this moment they are all bare, they look like skeletons, they look dead, but they are not -- they are recycling themselves," she said in a nod to the winter season.

"Those trees are not getting any older, they are strong."

Her life did not begin, however, in the most auspicious of circumstances.

Born on August 13, 1918 at the end of World War I, her mother died when she was just seven months old, and her father entrusted her to an uncle and aunt who brought her up in Pondicherry, then part of French colonial India.

She was raised a vegetarian. French and Hindi were her first languages. When still very young, she travelled to a number of countries with her uncle, who designed railway projects.

At 12, she met Gandhi when he visited the family home -- "a funny little man sitting on the floor with glasses and everybody bowing to him" -- she remembers.

Three weeks later, her uncle let her take part in what became Gandhi`s Salt March. From the father of modern India and her uncle, she says, she learned never to show contempt for anyone, and a sense of "oneness."

The onset of World War II saw her leave for Europe looking for her father, who was called up in France. She found refuge with an aunt in the Rhone, who initiated her into the world of wine -- one of her passions -- and the French Resistance.

After the Germans arrested a comrade, she travelled to London where she performed Indian dances for American troops.

It was there that she met Dietrich, who became a "very good friend."

After the war, she returned to France and modelled for Lanvin before travelling to the United States for the first time in 1948.

She returned to America for good a year later and worked in Hollywood, under contract for MGM for several years.

In California, she became a yoga teacher, having practiced it always, even as a child despite her guardians telling her "it is not for girls."

An Indian acquaintance in Hollywood pressed her to take up teaching.

Her first pupils? Actresses Debbie Reynolds and Kathryn Grayson. She then travelled back to India to deepen her knowledge from the renowned yoga teacher Krishna Pattabhi Jois.

She was married to Bill Lynch, an insurance broker, for 20 years until his death in 1982, but the couple had no children and she has no close relatives.

"My students are my children," she explains. It is with them that she celebrates birthdays.

And if yoga is not enough to keep her young at heart, she takes ballroom dances with partners 70 years her junior.