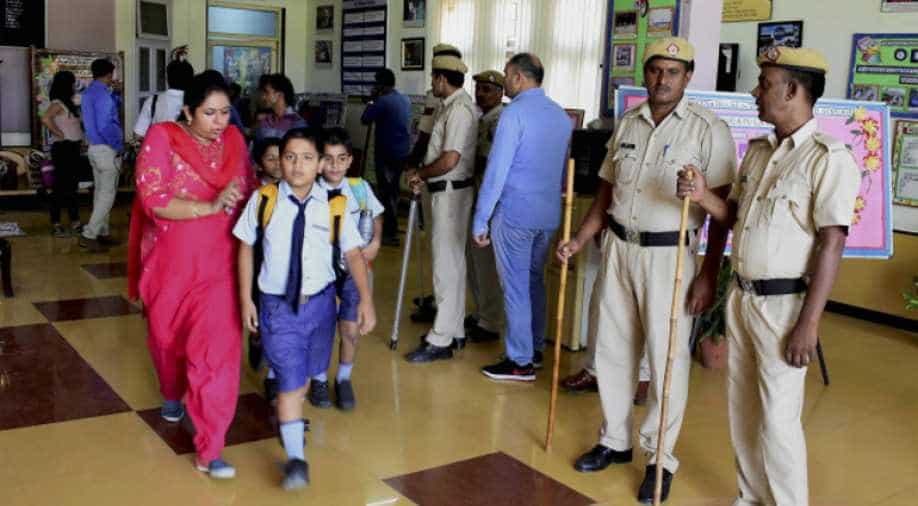 Parents take their children home after the murder of a class 2 student at Ryan International School as a police team looks on in Gurugram on September 8. Photograph:( PTI )

Amid protests by agitated parents, the principal of Gurugram's Ryan International School has been suspended after the alleged murder of a seven-year-old boy within the school premises on Friday.

The Central Board of Secondary Education (CBSE) has formed a two-member fact-finding committee - consisting of a school principal and a deputy commissioner - to probe the killing and sought a report from the school management within two days. The two-member panel has been asked to submit their report latest by October 16.

The panel will probe whether the death occurred due to negligence on the part of the school authorities and if the school had adopted all safety measures as per CBSE affiliation bye-laws. Its report will also dwell on whether the authorities reported the incident to police and the district education officer, besides the circumstances leading to the death of the student.

"A two-member fact finding committee has been set up to enquire into the tragic murder of the student in the school premises. The school has also been asked to submit a report within two days along with the copy of the FIR," a senior board official said.

The victim's mother said the Principal was "indifferent" when she came to hospital."  "Put her in jail. I want to know what happened to my child, I want CBI (probe)," the mother of the victim said.

Hundreds of agitated parents have been protesting outside the school since yesterday morning. They also demanded that the school management be booked for the killing of the boy.

Haryana chief minister ML Khattar condemned the heinous crime said the government had directed authorities to complete "formalities" within seven days and was ready for any kind of probe if the facts were not clear once the report came out.

The bus conductor accused in the murder was sent to three-day police remand by the Gurugram court earlier in the day. He has confessed to the killing and was arrested by the police yesterday.

Gurgaon Commissioner of Police Navdeep Singh Virk assured that the police will try and file a charge sheet within seven days and request for a fast trial of the case.

He confirmed that the bus conductor's involvement in the case and said action would be taken if anyone else was found to be involved.

On the bus conductor being made a scapegoat, the police commissioner said he was confident the police would be able to satisfy everyone after concluding the investigation.

"Principal Neerja Batra has been suspended. We took action against the security agency of the school. A special committee is probing the case," Gurgaon Deputy Commissioner of Police Simardeep Singh said.

The top police officer from Haryana had earlier said that the bus conductor killed the boy when he tried to resist the accused's attempt to sexually assault him.

He said today a special committee had been formed to probe the alleged murder of the class II student who was found  with his throat slit inside the toilet of the school on Friday.

He further added that the police have taken action against the security agency of the school.

"We talked to the boy's father and other relatives. We have told them everything, what the culprit has admitted, what all evidence we have got. They are satisfied with the investigation. They demanded that action should be taken against the authorities of the school. The principal has been suspended. The security agency has also been changed and enquiry has been made against it. It has been given in written for a new security agency," he said.

"We have formed a new committee headed by DEO (District Education Officer) to probe the matter. The record will be checked. Preliminary investigation has been done," he added.

The lawyer representing the victim said action against the school management was imminent.

"Action against school management is sure. The principal of the school has been suspended," the lawyer told the press earlier.

Hours after the incident, the Gurugram Police confirmed that the accused bus conductor tried to sexually assault the child before killing him.