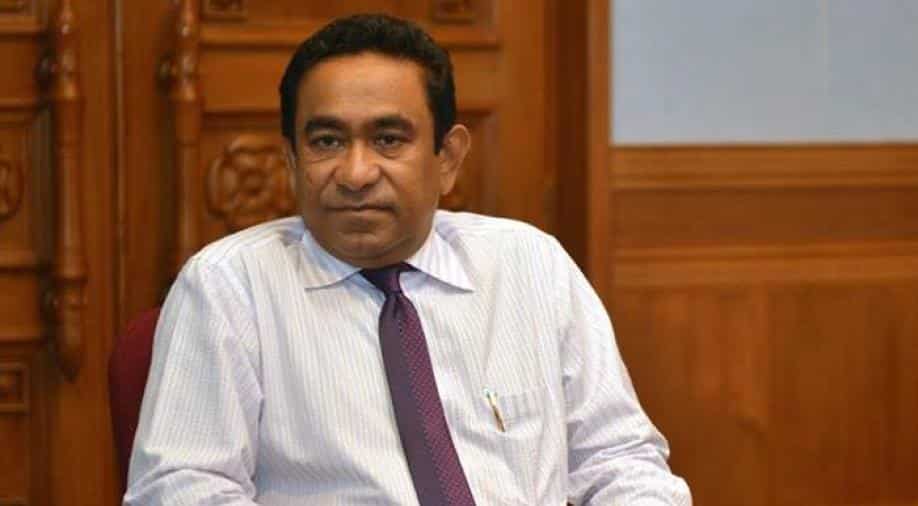 International pressure needs to be generated on President Yameen for conducting free and fair elections by ‘smart diplomacy’.

It is a flagship China's infrastructure project, linking capital Male with the airport island. Sinamale bridge was built with a grant of $116 million by China, apart from this China also provided a loan of $72 million.

President Abdulla Yameen hopes that this project will perhaps get him some relief from his sliding popularity following his dictatorial acts of targeting Supreme Court Judges, political opponents and signing Free Trade Agreement (FTA) with China.

President Yameen unofficially junked the ‘India First Policy’, when they asked India to remove its second gifted naval chopper (ALH Dhruv) from the Laamu atoll, on expiry of Letter of Exchange (LoE). Laamu has a potential to be developed into a military base. It is widely believed that China wants to build an ocean observatory there, which could become a part of China's ‘Incremental Encroachment Strategy’ - in case Maldives fails to pay off the debt.

Maldives is strategically located in the Indian Ocean, very close to Island of Minicoy (Part of India). The shipping from the Gulf of Aden and the Gulf of Oman passes through Minicoy and Maldives before sailing towards Sri Lanka/ Strait of Malacca/ the Java Sea/ Lombok Strait. Similarly, the shipping from the North Pacific Ocean, moving into the Gulf through these areas, also passes through this channel. It is estimated that nearly half of the world’s shipping consignments, including crucial oil for Japan and China passes through these points, hence control of these choke points is a major strategic concern.

What all can India do?

India, as a responsible nation, recognises that Maldives is a sovereign country with its right to choose its government as well as its strategic partners. Any military intervention by India is not a viable option, unlike 1988, when India was invited by the elected President to intervene. India, also, cannot be a silent spectator to decline of democracy and disorder in immediate neighbourhood, hence enhanced naval surface and sub- surface dominance, maritime patrolling in international water, and surveillance by all means needs to be resorted to, which I am sure is being done within international norms.

As per the media reports the two Indian naval helicopters, gifted to Maldives, are going to stay along with 48 member crew, which is a positive diplomatic step. India needs to negotiate that status quo is maintained in the two atolls where these are located, at least till the elections are over. India could give them the Dornier aircraft as requested by them, as an excuse not to renew LoE later. Further negotiations can be done with the newly elected government.

International pressure needs to be generated on President Yameen for conducting free and fair elections by ‘smart diplomacy’.

President Yameen has supported the Chinese Belt and Road Initiative. He will not mind taking China's help for his regime survival. It is highly debatable that a future military base of China in Maldives will be a strength or vulnerability for them in light of distance involved from mainland, inadequate air cover, and high relative strength of Indian Navy and its strategic partners.

On economic front, India can think of sanctions if President Yameen continues to pursue anti-India stance. This, however, is a double edged weapon, because it can be counter-productive, pushing Maldives into Chinese orbit further. A travel advisory and restriction on tourism can give a decisive blow to their economy, because Maldives’ tourism industry is largest income generating industry, highly dependent on India. In case Maldives inclination is positive, India should continue with goodwill investments like building a Police Academy and other developmental projects.

India also needs to build up its own military capability not only in context of Maldives but other maritime commitments and threats. We need to have more resources to counter threats by PLA Navy submarines in our area of our maritime interest. We need to have good relations with Oman, and getting access to Port of Dukm in Oman, agreements with France for access to their bases are positive steps in that direction.

Periodic inter-operability exercises like Malabar Exercise will continue to send right message regarding protection of Indian interest in the Indian Ocean Region.