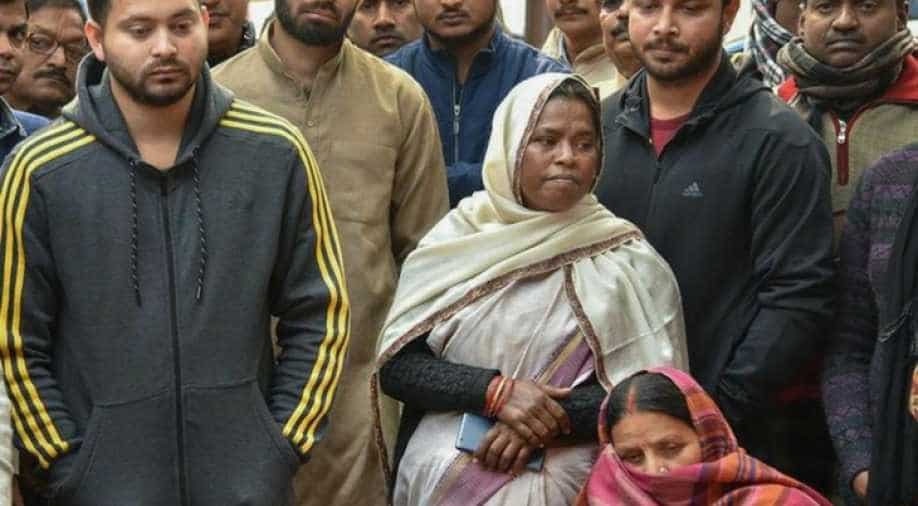 Tejashwi Yadav, Lalu's son, said the family had tried to communicate the news of Gangotri Devi's death to Prasad through the prison authorities in Ranchi but was unsure due to the legal procedure involved and the day being a Sunday. Photograph:( PTI )

Rashtriya Janata Dal (RJD) chief Lalu Prasad, sentenced to three-and-a-half years in jail in a fodder scam case might seek parol to attend the funeral rites of his elder sister Gangotri Devi, who died on Sunday.

As per reports, Devi had passed away due to severe aortic stenosis (constriction of the heart valve, which led to frequent breathlessness), acute myocardial infarction (heart attack) and left ventricle dysfunction.

The cremation will reportedly be held on Monday at her husband's native village Chakrapan in Gopalganj district, media reports said.

Tejashwi Yadav, Lalu's son, said the family had tried to communicate the news of Gangotri Devi's death to Prasad through the prison authorities in Ranchi.

He, however, expressed apprehension that his father might not be able to get parole in time, due to the legal procedure involved and the day being a Sunday.

"As of now, we are making arrangements to take the body to her village home, where the last rites will be performed," Yadav, who had accompanied his mother Rabri Devi and elder brother Tej Pratap to his deceased aunt's house, said.

75-year-old Gangotri Devi, who was four years elder to Lalu, had not been keeping very well for a while now.

Lalu Prasad's wife Rabri Devi said his sister had been fasting and praying for her brother which is when she fell ill.

"Yesterday, she spent the entire day praying for the release of her brother. When she learnt that he was sentenced to jail for a long period, she was shattered," Rabri Devi said.

On Saturday, Lalu was sentenced to three-and-a-half years in jail and fined Rs five lakhs by a special CBI court in a fodder scam case, related to the fraudulent withdrawal of Rs 89.27 lakh from the Deoghar treasury 21 years ago.