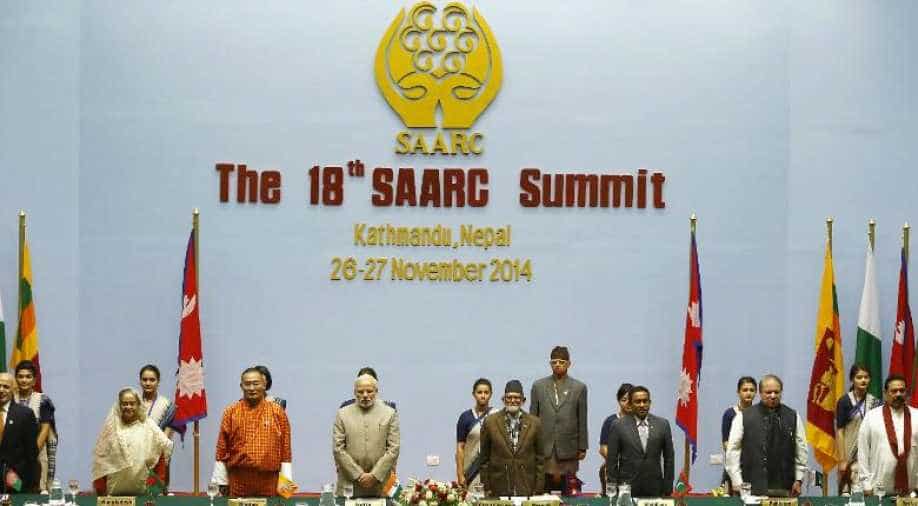 The development comes after the SCCI event on December 8 in Islamabad in which Pakistan Occupied Kashmir or PoK minister Chaudhary Muhammad Saeed was also present.

In a major development, India has asked South Asian Association for Regional Cooperation (SAARC) to derecognise the organisation's chamber of commerce of Industry (SCCI).

The development comes after the SCCI event on December 8 at Islamabad in which Pakistan Occupied Kashmir or PoK minister Chaudhary Muhammad Saeed was also present.

Calling the minister's presence as a breach of SAARC guidelines, New Delhi has called for initiating steps for derecognition of SAARC chamber of commerce and Industry as the apex body of the organisation.

The letter which was sent by India's ministry of external affairs on December 10, 2 days after the event in Islamabad to SAARC Secretariat in Kathmandu says SCCI invited "a renegade entity from the area of the Indian state of Jammu and Kashmir which is under the illegal and forcible occupation of Pakistan".

The letter which WION exclusively accessed stated that such acts of SCCI, a SAARC apex body, is in violation of SAARC charter and principles that provides for respect for sovereign equality, territorial integrity, political independence, non-interference in internal affairs of the other states.

Further, the SCCI has breached the guidelines and obligations meant for the SAARC apex bodies by indulging in political activities, not in conformity with the spirit, purposes and principles of the SAARC Charter, the letter stated.

The letter ended with India requesting "the SAARC Secretariat to consider initiating steps for derecognition of SAARC chamber of commerce and Industry as the apex body of the organisation.

The SAARC Charter day event on December 8 is the same event from which Shubham Singh an Indian diplomat left due to the presence of PoK minister.

An email to SAARC Secretariat for his response in the issue remainded unanswered.  The headquarters of SCCI is located in Islamabad.

Chaos prevailed in SAARC after several countries boycotted the 2016 Islamabad event due to the issue of cross-border terror emanating from Pakistan.

India had boycotted the summit due to the terror attack by Pakistan based terrorist on an Indian Army base in Uri in Jammu and Kashmir.

SAARC Charter day celebrations were largely muted in south Asia expect in Islamabad were at one event the Chinese ambassador was also called.

India has also been asking to vacate PoK, with last such reminder being given to Islamabad on 30th November.