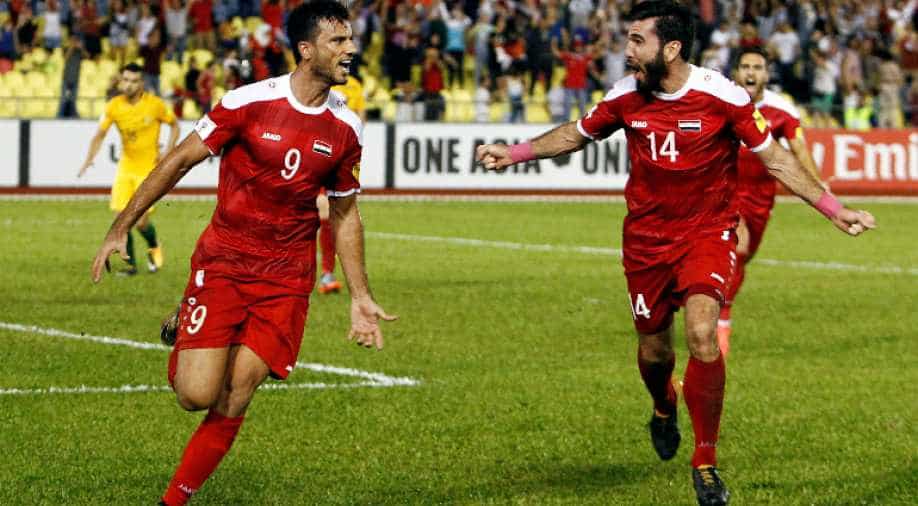 Syria?coach?Ayman Hakeem told reporters on Monday, ''The players have had to fight all the way through qualifying and they believe in themselves. We're looking forward to tomorrow.'' Photograph:( Reuters )

Syria coach Ayman Hakeem has backed his heavily depleted squad to continue the war-ravaged nation's unlikely march towards a maiden World Cup finals appearance when they take on Australia in the second leg of the Asian qualifying playoff on Tuesday.

Hakeem believes the fairytale run towards a place in Russia has illustrated the underlying unity of a nation bitterly divided by civil war and trusts his players to take another step towards the goal against at Sydney's Olympic stadium.

The odds were stacked against the Syrians throughout the third round of Asian qualifying but, despite having to play their 'home' matches in Malaysia because of security concerns in Syria, they managed to battle into the playoff.

A penalty five minutes from the end of the first leg last week earned them a 1-1 draw and a high-scoring draw or a win on Tuesday would secure an intercontinental playoff against the fourth-placed team in North and Central American qualifying.

His defence has been particularly badly hit but Hakeem believes the never-say-die attitude his team have shown throughout qualifying will enable them to hold out the Asian champions.

"We've faced many obstacles from the start," he told reporters on Monday.

"Five key players is a big loss for us but we trust the players we have. The players have had to fight all the way through qualifying and they believe in themselves. We're looking forward to tomorrow."

Hakeem said he had not decided yet whether to give an international debut to Swedish-born defender Gabriel Somi in the match and expects another tough tussle with the Socceroos.

"The game in Malaysia was the first half and tomorrow will be the second half," he added. "Both teams know each other well and there will be no surprises."

The visitors are expecting support from as many as 15,000 of Australia's Syrian and wider Arab community at the Olympic stadium and Hakeem said they had the backing of the entire nation back home.