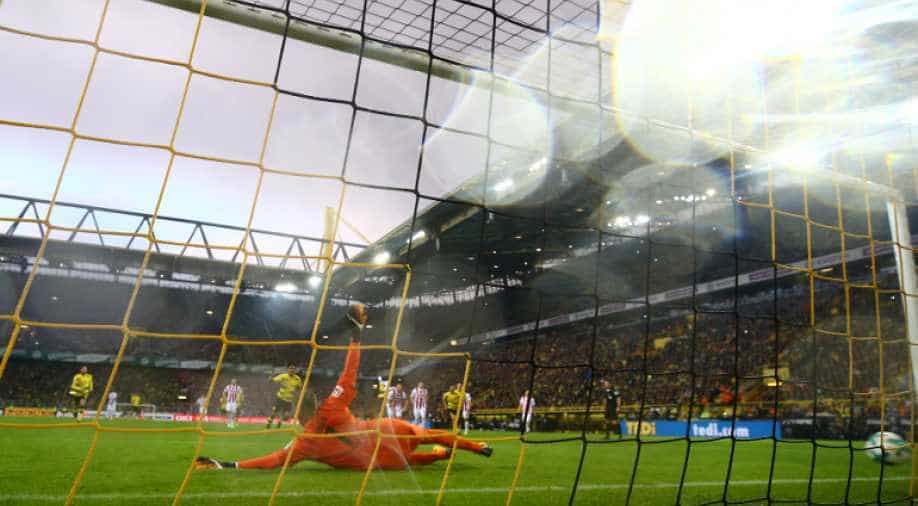 The?VAR?was again?decisive?in the 59th minute when?Cologne's Lukas Kluenter raised his arm to a Yarmolenko cross and the referee, after another consultation, awarded the penalty which Aubameyang converted.

Borussia Dortmund thumped Cologne 5-0 on Sunday, their haul including a goal and penalty awarded with help from the video assistant referee (VAR), to leave their opponents bottom of the Bundesliga and pointless after four games.

Cologne were furious about the first VAR incident where the referee initially disallowed a Dortmund goal by Sokratis and awarded them a free kick, before reversing the decision.

The club's sporting director Joerg Schmadtke said the referee had not followed protocol and that they would demand a replay.

Maximilian Philipp and Pierre-Emerick Aubameyang each scored a brace, the latter in the space of two minutes, as Cologne returned to the harsh realities of the Bundesliga after their midweek European adventure in London. Borussia, meanwhile, went top with 10 points, ahead of Hanover 96 on goal difference.

An estimated 20,000 Cologne fans marched through London on Thursday to celebrate their team's first European match in 25 years as they visited Arsenal.

Despite the festive atmosphere, many of them did not have tickets and the match, won 3-1 by Arsenal, was delayed for an hour by crowd problems.

The Billy Goats barely had time to settle on Sunday before Philipp headed in Andriy Yarmolenko's cross after two minutes.

Cologne pulled themselves together and held their own until the stroke of halftime when their goalkeeper Timo Horn dropped the ball at a corner and Dortmund defender Sokratis tapped it in.

Referee Patrick Ittrich at first awarded Cologne a free kick but, after consulting with the VAR, changed his mind and gave the goal. However, Cologne said that the referee had blown his whistle before the ball entered the goal, meaning that he could not subsequently award it no matter what the video showed.

"We will naturally lodge a protest," said Schmadtke. "If a decision is made against the framework of rules, then a replay is necessary and that is what we will seek."

"We need a protocol where it is clearly established when the (VAR) assistant can intervene and when he can't," he added.

The German league did not immediately comment, nor did referee Ittrich.

The VAR was again decisive in the 59th minute when Cologne's Lukas Kluenter raised his arm to a Yarmolenko cross and the referee, after another consultation, awarded the penalty which Aubameyang converted.

The Gabon forward struck again the following minute when he turned in another Yarmolenko cross and Philipp dinked the ball over Horn for the fifth goal in the 69th minute.

Kevin Volland scored twice as Bayer Leverkusen beat Freiburg 4-0 to claim their first win of the season and leave the Black Forest side winless.

Hoffenheim, 2-0 winners over Bayern Munich the previous weekend, were held 1-1 at home by Hertha Berlin, leaving them with eight points.