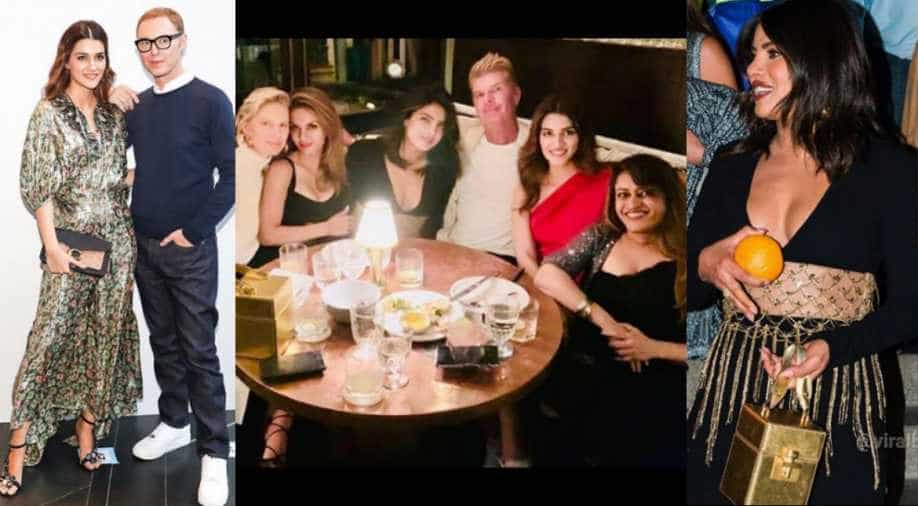 In impromptu plans, the two Bollywood beauties were spotted having a good time together along with others from the industry as they attend the fashion week.

It was a mini Bollywood reunion-of-sorts in New York as Priyanka Chopra met up with Kriti Sanon and hung out for dinner after they attended the Fashion Week going on in the fashion capital of the world. The two beauties were spotted having a good time together as they caught up for a fancy dinner. Also seen were Mumbai socialite Natasha Poonawalla, Czech model Karolina Kurkova, fashion stylist Edwardo and publicist Rohini Iyer on their table.

Kriti was the first to take to her social media as she posted a photo of their get together and captioned it, “Impromptu plans are the best!! It was so lovely meeting u last night @priyankachopra !! #GirlCrush @natasha.poonawalla good to seeya in a different city this time @rohiniyer this trip has been fab..! To many more..!”

Impromptu plans are the best!! It was so lovely meeting u last night @priyankachopra !! ❤️❤️ #GirlCrush @natasha.poonawalla good to seeya in a different city this time😘😉 @rohiniyer this trip has been fab..! To many more..!

While Priyanka was spotted wearing a black dangerously low-neckline dress that she was spotted in during the fashion week, Kriti however, changed into a red off-shoulder dress for the outing.

Priyanka had attended the Oscar De La Renta show while Kriti is attending the fashion week as an ambassador for Coach. She attended the Coach show in a shimmery colourful dress with a thigh-high slit and dark high heels. She carried a bag by Coach.

After the show, Kriti was heard saying, “It was such a surreal experience to watch the Coach Spring Summer 2020 show front row at New York Fashion Week. I’ve always been a fan of their collections especially their leather accessories.”

A stunning show by @coach yesterday at the New York Fashion week!! 💞💞💃🏻💃🏻 @luxe_project

Thank you for the best fashion experience ever @stuartvevers 💃🏻❤️ Absolutely loved the Spring Summer 2020 collection of @coach !! You are brilliant!

As for Priyanka, she will soon be jetting off to Toronto for the International Film Festival taking place where her next film, ‘The Sky Is Pink’ will be screened. The film is directed by Shonali Bose and also stars Farhan Akhtar and Zaira Wasim. It will release in theatres on October 11 and marks Priyanka’s return to Hindi films after a gap of three years.