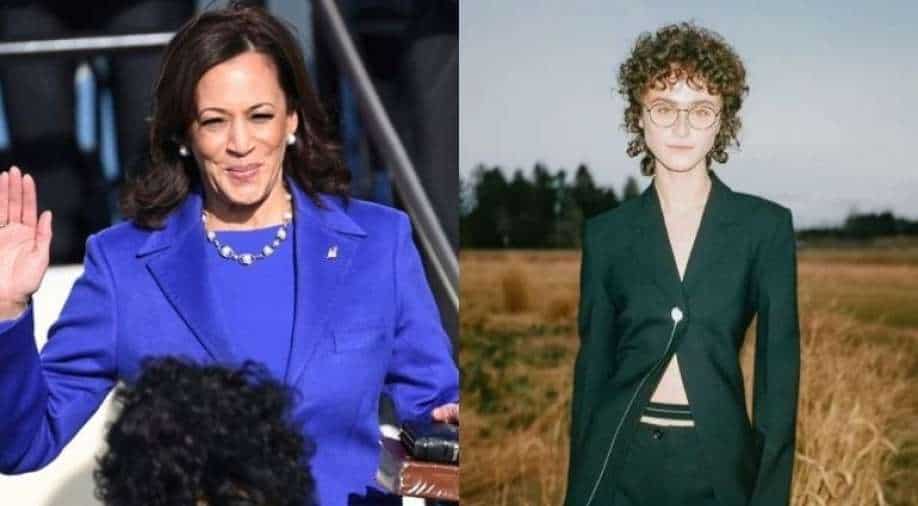 Designers at Proenza Schouler decided to dress Ella Emhoff in a couple of coats and a pantsuit as she walked the ramp for New York Fashion Week.

Design student Ella Emhoff had created quite a stir in the fashion circuit when she wore a chequered bejewelled coat at stepmother, US Vice President Kamala Harris inaugural ceremony in Jan. And so, it was kind of obvious that as she made her runway debut a month later, she would be dressed in a coat.

Designers at Proenza Schouler decided to dress Ella Emhoff in a couple of coats and a pantsuit as she walked the ramp for New York Fashion Week.
The fashion week for the first time has taken the virtual route this year owing to the pandemic and Ella Emhoff shot for her portion of walk a few weeks back, several media reports state.

Ella had made heads turn earlier during the Presidential inaugural ceremony when she wore a Miu Miu coat with bejewelled shoulders alone with white collar. The look was termed quirky and several fashionistas lauded Ella's choice which looked strikingly different from the usual coats in the crowd!

Ella is an art and knitwear designing student at Parsons School of Design. The video was shot outdoor a few weeks back revealed designers Lazaro Hernandez and Jack McCollough during a press interaction. Her quirky look inspired the designer duo to dress her up in coats for her runway debut.

“I have to say I was a little nervous,” Emhoff, daughter of Harris’s husband Doug Emhoff, said later in a streamed talk with the designers, also released Thursday. “I definitely lost a little sleep the night before. I’m walking for the first time, I’m in this professional environment for the first time … the anticipation was really high.” She spoke of her love for knitting and textiles, and the dream of her own knitwear brand.

“She kind of reminded us of our friends and ourselves in a lot of ways back when we were at Parsons,” McCollough said. He and Hernandez launched their own brand in the senior year of studying in the design school.

For Emhoff, the designers chose a long grey wool coat with fluffy embellishments on the shoulders, then a midnight navy leather trench-type coat, and a black pantsuit.