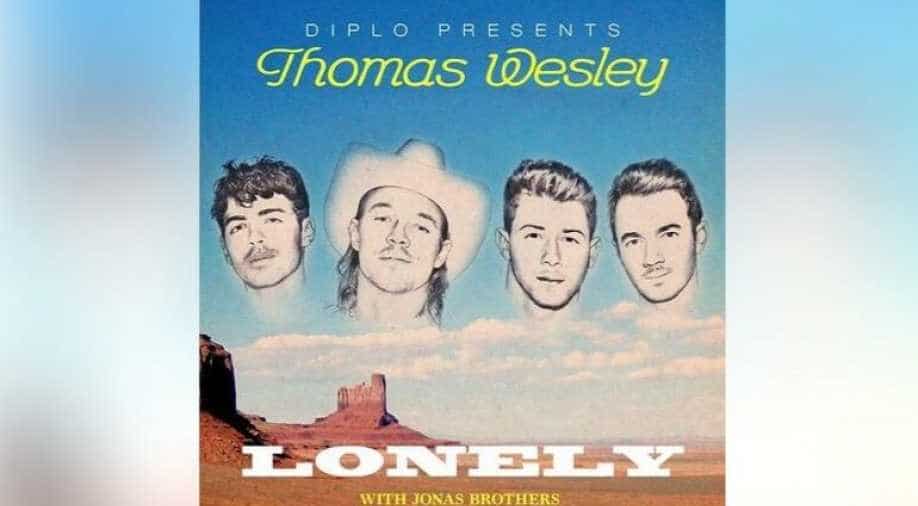 Diplo and Jonas Brothers have collaborated for a new song Photograph:( Instagram )

Poking fun at how Diplo live-streamed Joe and Sophie`s Las Vegas wedding earlier this year, the music video follows the deejay`s attempt to contact Joe and apologise for ruining his big day.

In the song, Jonas Brothers croon sweet nothings like, "Wanna ride with you `til the wheels fall off. Till we`re running out of road."
It`s that soothing love song, you would want to listen to with your better half. But what we see onscreen is far from a love story!
It centres around the pop band ignoring Diplo`s texts in which he apologises for live-streaming Joe and Sophie`s wedding, which, actually happened in real life.

Poking fun at how Diplo live-streamed Joe and Sophie`s Las Vegas wedding earlier this year, the music video follows the deejay`s attempt to contact Joe and apologise for ruining his big day.

In the music video, each time Diplo tries to text, call or Facetime Joe, he quickly denies it, looking visibly upset. The deejay leaves no stone unturned to speak with the singer by contacting Nick and Kevin in hopes that they`ll answer.

He goes all out by sending Joe a chocolate fruit arrangement with a message that reads "Call me back," signed "Thomas Wesley (Diplo)".

By the end of the video, the JoBros decide to forgive Diplo and finally Facetime the deejay. However, just when he`s about to answer their call, Diplo`s phone dies and with that, the video ends.

This marks the first time that any Jonas brother has collaborated with Diplo, who in April announced the launch of his new country project under his birth name, reported People.

His first song under the moniker, `So Long` with singer Cam, was released in May, while the second, `Heartless` with Morgan Wallen, came out in August.

The music video came a day after Diplo hacked the JoBros` Instagram account and trolled his pals with a string of silly posts on their feed and Instagram Story. After the Instagram takeover, both Diplo and the band shared a video teasing their new collaboration along with the caption, "lonely. 12am et."

In the teaser clip, Diplo and the boy band can be seen looking at their phones in separate shots, seemingly all by themselves.

Diplo first teased a collaboration was on the way with the Jonas Brothers in June, telling Ryan Seacrest on his radio show that there had been something in the works."I have some songs I`m doing with the Jonas Brothers and I`m friends with them," Diplo said. While the interview came weeks after Diplo documented Joe`s surprise Vegas wedding to Sophie, which Joe jokingly said the deejay had "ruined", Diplo was also invited to the couple`s second wedding in France in June.