Yearender: The Best TV Episodes of 2021 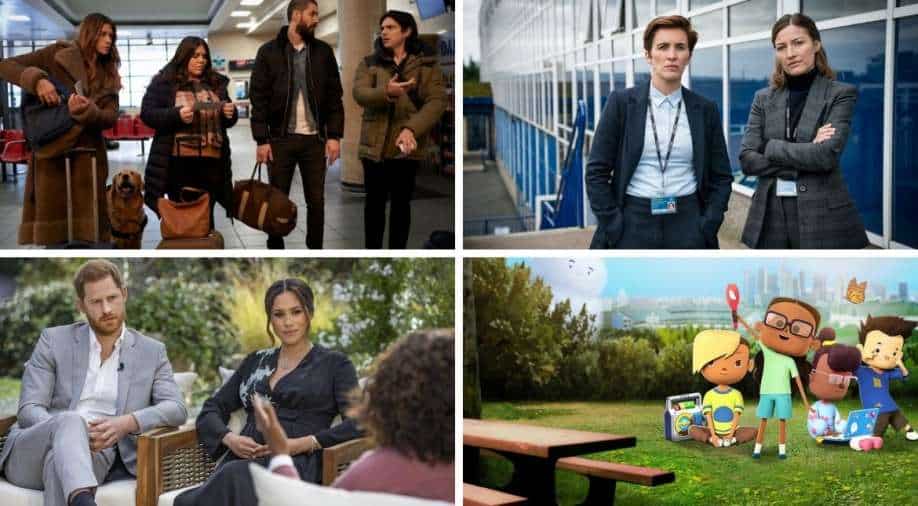 Television today comes in big portions, as anyone who spent seven-plus hours with the Beatles over Thanksgiving weekend can attest. But just as a marathon jam session can yield a few tight singles, the most memorable TV is still often the well-crafted individual episode.

Television today comes in big portions, as anyone who spent seven-plus hours with the Beatles over Thanksgiving weekend can attest. But just as a marathon jam session can yield a few tight singles, the most memorable TV is still often the well-crafted individual episode. As Mike Hale, Margaret Lyons and I end another year’s binge as TV critics for The New York Times, here are a few of the installments from 2021 that topped our personal hit parades. — JAMES PONIEWOZIK

More than 30 European actors — including stars like Isabelle Huppert, Juliette Binoche and Jean Reno — have graciously and often mercilessly lampooned themselves in this French dramedy, playing clients or prospective clients or angry former clients of the fictional talent agency ASK. In this Season 4 episode, an American stepped in, and Sigourney Weaver, speaking more than passable French and playing herself as an utterly charming manipulator, was flawless. (Streaming on Netflix.) — MIKE HALE

Plenty of children’s shows are cute, but “City of Ghosts” is also beautiful, and its poetic wistfulness about Los Angeles would be at home on a premium cable drama. Instead it’s in this plucky, naturalistic cartoon about ghost-hunting kids who have a podcast. I loved every episode of this show. But I picked “Bob & Nancy” because it’s about a marionette theater, and thus it toys with ideas of animating the inanimate — rich ground for a show in touch with the spirit realm. (Streaming on Netflix.) — MARGARET LYONS

This teen kidnapping mystery took all the hallmarks of prestige-y crime shows — split timelines, dark lighting, tangential secrets — and repackaged them with a kicky ’90s YA flair. It was one of the juicy highlights of the summer. But shows like this are only as good as their finales, and “Cruel Summer” managed the trick of both a happy ending and a thrilling, dark twist. (Streaming on Hulu.) — MARGARET LYONS

Texting can be a crutch for TV shows, a way to use pop-up bubbles to give characters phone-enabled telepathy. Not so in this playful, smart half-hour, in which Dave Burd’s up-and-coming rapper made (and lost) a date with Doja Cat. As the two musicians courted with their thumbs, “Somebody Date Me” showed how context and time can change the meaning and reading of the smallest online (mis)communication. Thumbs-up emoji! (Streaming on Hulu.) — JAMES PONIEWOZIK

Each season of this space-race alternative history is a multistage booster rocket. The slow-moving early episodes expend a lot of fuel, building energy and narrative force until the show reaches escape velocity. (Aerospace engineer readers, I beg you not to fact-check my metaphors.) The white-knuckle Season 2 finale moved with the deftness of a docking maneuver, as a U.S.-Soviet conflict on the moon and a threatened war on Earth required risk and sacrifice on two celestial bodies and points in between. (Streaming on Apple TV+.) — JAMES PONIEWOZIK

‘Take Me to Church’

The music and community of the Black church co-starred in two praiseworthy hours of TV. The Aretha Franklin bioseries peaked as it focused on the recording of the 1972 “Amazing Grace” live album at New Temple Missionary Baptist Church, fusing the artist’s past and present in a crucible of soul. In “Pose,” a grim diagnosis led Pray Tell (Billy Porter) back to his hometown and church community, both to confront the homophobia that drove him from it and give voice to the music that sustained him. (Stream “Genius: Aretha” on Hulu; buy “Pose” on Amazon.) — JAMES PONIEWOZIK

‘Somewhere Over the Border’

This CW drama about a blind woman and her buddies, who run a rescue-dog agency and get involved in drug dealing and murder, is no more than a serviceable thriller. But the rapport among its central characters, Murphy (Perry Mattfeld), Jess (Brooke Markham) and Felix (Morgan Krantz), has developed into one of the more believable and moving portrayals of friendship on TV. When Murphy found herself stranded in a strange country, the strength of those ties was the foundation of a taut and agonizing hour. (Streaming on Netflix.) — MIKE HALE

Tension and deception pump through the veins of this breakneck procedural about a British internal-affairs unit, and no show does cliffhangers better. You could point to just about any episode; this one, with one of the heroes following a possibly dirty cop into an abandoned industrial park because that’s what the job called for, was off the charts. (Streaming on BritBox.) — MIKE HALE

In just 13 minutes, this elegant short about a giant’s corpse that washes up on a beach one day captures, in a perfect snapshot, humanity’s tendency to desecrate marvels, to behold a world-changing event and decide simply to carry on. Based on a short story by J.G. Ballard, “The Drowned Giant” is rendered here in mostly realistic animation, with the giant’s clean-shaven cheeks, tidy fingernails and muscular chest shown in aching detail. In an era when so many shows just blend together, this episode stands out for its light touch and sad imagination. (Streaming on Netflix.) — MARGARET LYONS

‘All the Holidays at Once’

After “The Great British Baking Show,” lots of reality competition series have gone away from the cutthroat in favor of the warm and fuzzy, and perhaps no show is warmer and fuzzier than the craft competition “Making It.” Each episode has its charms, but “All the Holidays at Once” was especially thrilling, because unlike some of the show’s grander projects, crafting your own Halloween costume is pretty standard fare, even for layfolk. The contestants’ giddy joy in presenting their creations to the judges was matched only by my own giddy joy at seeing their silly and spectacular costumes. Jess won with her superb alien-abduction costume, but when everything is this fun, don’t we all win? As a bonus, this episode also included Melañio telling a story about a bat in a toilet, a tale that will haunt me for the rest of my days. (Streaming on Hulu.) — MARGARET LYONS

Having come up with one of the best pandemic-inspired episodes of 2020, this video game industry comedy is gunning for TV’s high score in stand-alones. This installment gave backstory-obsessed game writer C.W. Longbottom (a wonderfully blustery F. Murray Abraham) his own flashback as a struggling sci-fi author in the 1970s — a funny and poignant tale of irony, professional jealousy and success at a cost. (Streaming on Apple TV+.) — JAMES PONIEWOZIK

Ry Russo-Young’s three-part documentary about her lesbian mothers and the sperm donor who sued them for parental rights, threatening to pull apart her family, built to a powerful and eloquent conclusion. It both affirmed the importance of the battle her mothers fought and questioned the assumptions of everyone involved. (Streaming on HBO Max.) — MIKE HALE

‘Oprah With Meghan and Harry’ (CBS)

One so rarely gets to receive or send a “turn on your TV right now” text, especially in my line of work. So for that dual thrill alone this interview earned a place in my heart. It was the kind of programming that barely exists anymore: a tell-all network special in which celebrities share genuine new information with Oprah, the patron saint of soul-baring. There were Prince Harry and Meghan Markle, aglow in the California sun, decrying racism and candidly discussing mental health crises. Which would have been enough, but they also reset the royal narrative, gave Oprah eggs, fought back tears and gazed lovingly at each other — all while sitting in chairs sold by Christopher Knight from “The Brady Bunch.” Television, baby! I love you! — MARGARET LYONS

Mutsuko Erskine had never acted before her daughter, Maya, cast her to play Maya’s mother in Hulu’s brutally funny teen comedy. Sometimes daughter knows best. This showpiece episode, in which a chance meeting with an ex-husband led Yuki to look down a road not taken, was a rich vignette of an immigrant’s experience and a subtle performance to cap off the role, literally, of a lifetime. (Streaming on Hulu.) — JAMES PONIEWOZIK

Who would have thought the origin story of Comic Book Guy, done partly as an affectionate sendup of a Wes Anderson film, would be so lovely? (Streaming on Disney+.) — MIKE HALE

‘All the Way Down’

This brutal and only-as-sentimental-as-it-needs-to-be drama about a rogue CIA agent and a young Black entrepreneur, partners in the crack wars in early 1980s Los Angeles, still does not get enough attention. That’s especially true of the stories written by novelist Walter Mosley, like this chilling, tightly packed episode about rage, revenge, gentrification and wanting to go straight. (Streaming on Hulu.) — MIKE HALE

‘Filmed Before a Live Studio Audience’

Several installments of this superhero psychodrama, set in a bizarro-world version of classic sitcom formats, could have made this list. But might as well start at the beginning, when Wanda (Elizabeth Olsen) and Vision (Paul Bettany) played house on a 1950s stage set whose made-for-TV perfection turned horrifyingly (and ingeniously) wrong. (Streaming on Disney+.) — JAMES PONIEWOZIK

“Shadows” is one of the funniest shows on TV right now, and “Casino,” where the gang heads to Atlantic City, was my favorite episode this season. Nandor (Kayvan Novak) becomes entranced by a “Big Bang Theory” slot machine — “‘bazinga’ is the war cry of Sheldon,” he explains — and in perfect, cascading horror, this leads to the total dissolution of his understanding of the universe. “Shadows” is its best when the vampires’ grandiosity clashes with their vulnerabilities, especially their excitability, and I’ll never see another in-house ad on a hotel TV without thinking that it’s Colin Robinson’s favorite show. (Streaming on Hulu.) — MARGARET LYONS