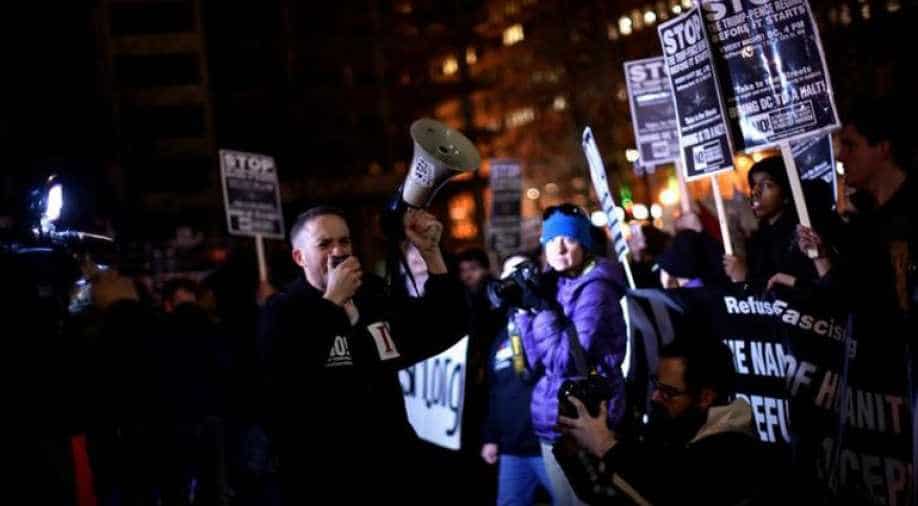 Black-clad activists angry about US President Donald Trump's inauguration smashed store and car windows in Washington on Friday and fought with police in riot gear who responded with pepper spray and stun grenades.

About 500 people, some wearing masks and kerchiefs over their faces, marched through the city's downtown, breaking the windows of a Bank of America branch, a McDonald's outlet and a Starbucks shop, all symbols of the American capitalist system.

They also vandalized several cars and hurled trash cans and newspaper vending boxes into the streets before being largely dispersed by police about 90 minutes before Trump was sworn in at the Capitol a mile and a half (2.4 km) away.

"The message I want to send is that Trump does not represent this country. He represents the corporate interests," said Jessica Reznicek, a 35-year-old Catholic aid worker from Des Moines, Iowa, who was part of the protest but did not participate in the violence.

Not far from the White House, protesters scuffled with police, at one point throwing aluminum chairs at an outdoor café. A member of the "Bikers for Trump" group in town to celebrate the inauguration was struck in the face when he tried to intervene.

"I know, law and order and all that. We need more order. This ain't right," said Bob Hrifko, who was bleeding from a cut under his eye.

Two Washington DC police officers were injured in altercations with protesters, a local ABC television affiliate reported. Police detained about 50 people a few blocks away, as a crowd chanted "Let them go."

The number of people who turned out to view the midday swearing-in, on a gray day threatened by rain, appeared to be significantly smaller than the estimated 2 million who turned out for President Barack Obama's first inauguration in 2009.

Overhead video of the National Mall showed sections of the white matting laid down to protect the grass were largely empty.

More people were expected to be on hand when Trump and his entourage travel along Pennsylvania Avenue to the White House later Friday afternoon.

"We have a lot of people of diverse backgrounds who are against US imperialism and we feel Trump will continue that legacy," McCracken said.

Tensions were high on the streets of Washington ahead of the inauguration, with occasional scuffles breaking out.

"A protester came over and ripped off the Don's head," Karen Korthaus said as she showed a reporter a video of the incident. "We ran to a pizza shop and taped his head back on".

Carl Beams, 36, from Howell, New Jersey, stood in line with thousands of other Trump supporters waiting to enter the National Mall to view the inauguration.

"This is a great moment in history. I wanted to be able to say I was here firsthand," said Beams, who runs a martial-arts school.

While Washington was the focal point of the anti-Trump protests, there were sympathy rallies around the nation and world.

Activists in London hung a banner reading "Build bridges not walls" on the city's iconic Tower Bridge, a reference to Trump's signature campaign promise of building a wall on the US-Mexican border.

By far the largest protest is expected to be Saturday's Women's March on Washington, which some 200,000 people from around the country are expected to attend.

The US Secret Service, Washington police and other law enforcement agencies had about 28,000 officers in place to secure a roughly three-square-mile area of downtown Washington.