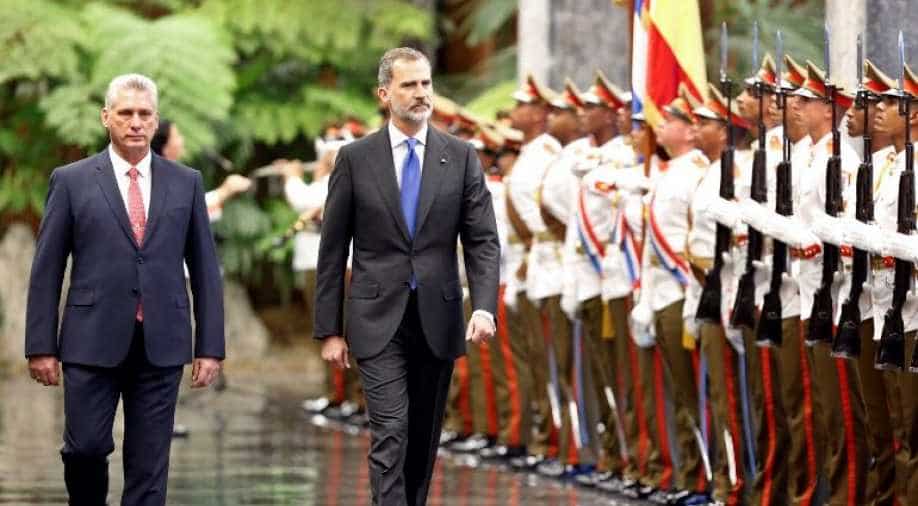 The king held closed-door conversations with Diaz-Canel during which they agreed to further develop positive bilateral political and economic relations, according to Cuban state-run media.

Earlier in the day, Felipe and his wife Letizia laid flowers at the monument in Havana to Jose Marti, a symbol of Cuba's struggle for independence from Spain, before meeting with President Miguel Diaz-Canel in the Palace of the Revolution.

The king then held closed-door conversations with Diaz-Canel during which they agreed to further develop positive bilateral political and economic relations, according to Cuban state-run media. Spain is Cuba's third-largest trading partner and one of its top investors.

The visit illustrates the normalization of Europe's relations with Cuba even as the United States doubles down on a decades-old policy of seeking to force the government to reform by tightening its crippling trade embargo.

Some Spanish politicians and Cuban dissidents have criticized the trip, saying it legitimises Cuba's one-party system at a time of increased repression.

Yet many locals are grateful for what they see as a sign of support for the Cuban people, struggling with a crisis in the inefficient state-run economy in the wake of a decline of support from ally Venezuela and increased U.S. sanctions.

"Spain remains our parent nation and we identify a lot with it, so their visit is very important to us," said Havana resident Maria Pazos, whose paternal great-grandparents came from Catalonia. "It's also a reaffirmation that we are not alone, that we have support."

Historic and family bonds have long underpinned Cuban-Spanish relations, sometimes regardless of the political flavour of the moment. Revolutionary leader Fidel Castro, for example, whose father was a Spanish immigrant, had surprisingly good relations with former Spanish dictator Francisco Franco.

The royal visit was timed so the couple could take part in the celebrations of the 500th anniversary of the founding of the Cuban capital by a Spanish conquistador. Havana was once one of the most important cities in the Spanish empire, providing a port for its treasure fleet.

Diaz-Canel's wife Lis Cuesta took Letizia on a tour of Old Havana that has received a facelift since the 1990s and is considered an architectural jewel due to its mix of colonial, Art Deco and neoclassical styles.

Felipe later joined Letizia at the cathedral, which previously housed the remains of explorer Christopher Columbus, whose encounter with Cuba in the service of the Spanish crown led to it being colonized by the Spaniards. The remains of Columbus were moved to Spain after Cuba became independent of that country in the 1890s.