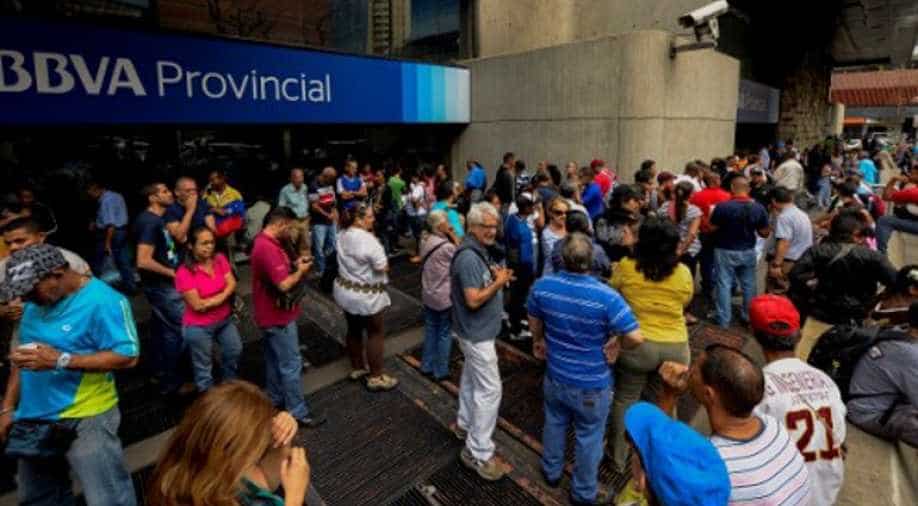 As usual, it is ordinary Venezuelans suffering, waiting in line for hours to deposit the doomed bills, when they could be working, studying or caring for their families. Photograph:( AFP )

Venezuela's food, medicine and currency crisis now gets worse with the government deciding to put millions of bank notes out of circulation.

The 100-bolivar bill is currently the highest-denomination bank note in Venezuela, but on its own it is scarcely enough to buy a piece of candy

"It's horrible, horrible. They can't do this a few days before Christmas," Perez, a middle-aged homemaker, told AFP.

President Nicolas Maduro on Sunday ordered the most common bank note, the 100-bolivar unit, to be scrapped by Thursday.

Some vendors have already stopped accepting the 100 bolivar notes for fear of not being able to deposit them by Thursday, AFP reported.

The 100-bolivar bill is currently the highest-denomination bank note in Venezuela, a country with one of the highest rates of violent crime in the world.

The new higher-denomination notes will be released from Thursday, the biggest being a 20,000 bolivar bill.

Maduro scrapped the 100-bolivar bill to combat "a US-backed plot against Venezuela".

He said that billions of 100-bolivar bills were stashed away by international gangs in Colombia, Brazil and even in Europe and Asia.

He also ordered the Colombia border to be closed for three days, to stop the gangs depositing their hoarded banknotes, the AFP report stated.

The government said on Tuesday that police had arrested 117 people and seized the equivalent of $155 million in raids on such gangs.