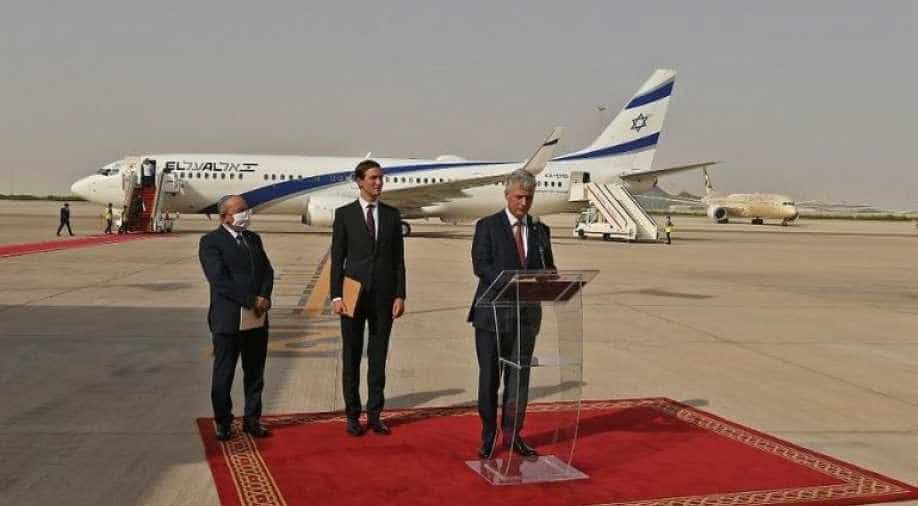 US National Security Adviser Robert O’Brien delivers a speech his arrival, as part of an Israeli-American delegation, at the Abu Dhabi airport, in the first-ever commercial flight from Israel to the UAE, on August 31, 2020. Photograph:( AFP )

Jared Kushner, President Donald Trump's son-in-law and White House advisor, was on board Flight 971 of Israel's national carrier El Al as part of the delegation who were to meet with UAE officials

The first direct commercial flight from Israel to the United Arab Emirates landed in Abu Dhabi on Monday, with a US-Israeli delegation on board, after the two countries struck an accord to normalise ties.

Jared Kushner, President Donald Trump's son-in-law and White House advisor, was on board Flight 971 of Israel's national carrier El Al as part of the delegation who were to meet with UAE officials.

The aircraft flew through Saudi Arabia's airspace, according to specialist website FlightRadar24 -- the first time El Al has publicly flown over the kingdom.

The word "peace" was written in Arabic, English and Hebrew on the cockpit of the plane of Israel's national carrier El Al that took off around 11:20 am (0820 GMT) and was expected to land in the Emirates in the afternoon.

"While this is a historic flight, we hope that it will start an even more historic journey in the Middle East and beyond," Kushner, who is President Donald Trump's son-in-law and a key architect of his Middle East policy, said before boarding.

"The future does not have to be predetermined by the past. This is a very hopeful time."

The flight number El Al 971 is a reference to the UAE's international dialling code, and the return flight, set to leave Abu Dhabi on Tuesday morning, is El Al 972, matching Israel's dialling code.

The Israel-UAE agreement to normalise ties was announced by Trump on August 13, making the UAE the first Gulf country and only the third Arab nation to establish relations with Israel.

Unlike Egypt, which made peace with its former battlefield enemy in 1979, and Jordan, which followed in 1994, the UAE has never fought a war with Israel.