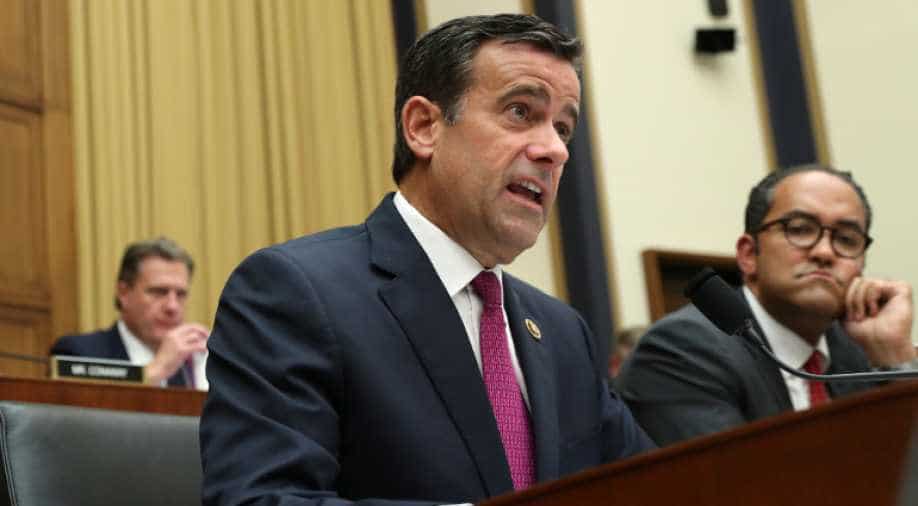 President Donald Trump's controversial pick to be the next Director of National Intelligence, Representative John Ratcliffe, withdrew from consideration on Friday amid questions over his experience and credentials.

Trump blamed Ratcliffe's withdrawal on attacks from the media but the nomination of the Republican lawmaker from Texas had raised broad concerns about the politicization of the sensitive post and his Senate confirmation was far from assured.

Trump said he would announce a new nominee "shortly" to replace Republican former senator Dan Coats as head of the 17 agencies that make up the US intelligence community.

"Our great Republican Congressman John Ratcliffe is being treated very unfairly by the LameStream Media," Trump said in a tweet announcing the withdrawal of his choice for DNI.

"Rather than going through months of slander and libel, I explained to John how miserable it would be for him and his family to deal with these people," Trump said. "John has therefore decided to stay in Congress where he has done such an outstanding job representing the people of Texas, and our Country."

Our great Republican Congressman John Ratcliffe is being treated very unfairly by the LameStream Media. Rather than going through months of slander and libel, I explained to John how miserable it would be for him and his family to deal with these people....

....John has therefore decided to stay in Congress where he has done such an outstanding job representing the people of Texas, and our Country. I will be announcing my nomination for DNI shortly.

The nomination of Ratcliffe, a staunch Trump supporter, to become the chief US intelligence official had come in for strong criticism from Democrats.

It received only tepid support from key Republicans, putting a question mark over whether the 53-year-old Ratcliffe could have earned the 51 votes needed for Senate confirmation.

"Rep. Ratcliffe never should have been considered in the first place," said New York Senator Chuck Schumer, the head of the Democratic minority in the Senate. "This is part of a pattern from President Trump: nomination on a whim without consultation or vetting, and then forced withdrawal when mess ensues.

"The next Director of National Intelligence must be someone who is nonpartisan, sees the world objectively and speaks truth to power," Schumer said.

Ratcliffe is the latest of several people Trump has floated for key jobs in the US government who pulled out before they could assume the posts.

"This is as close as Trump will ever get to acknowledging that the individual he nominated is so woefully under-qualified for DNI," said Ned Price, a former CIA officer and spokesman for the National Security Council under Democratic president Barack Obama.

Price said on Twitter that Ratcliffe was "so extraordinarily hyper-partisan, and so brazenly deceitful in his resume that he would've met a freight train even in a rubber stamp Senate."

Ratcliffe's resume has been the subject of several news articles in recent days which suggested he may have burnished his anti-terrorism credentials. He claimed on his website that he sent terrorists to prison while a prosecutor but that does not appear to be the case.

The outspoken defender of the president frequently appears on Fox News repeating conspiracy theories, like alleging that special counsel Robert Mueller's investigation into Russian election interference was a political hit-job by Democrats working with US intelligence.

Before arriving in Congress in 2015, he was mayor of a small, wealthy lakeside suburb of Dallas, Texas for eight years, a staff lawyer for the local federal district attorney, and then interim district attorney for just one year in 2007.

In a statement, Ratcliffe, who serves on the House intelligence, judiciary and homeland security committees, thanked Trump for nominating him.

"I was humbled and honored that the President put his trust in me to lead our nation's intelligence operations and remain convinced that when confirmed, I would have done so with the objectivity, fairness and integrity that our intelligence agencies need and deserve," he said.

"However, I do not wish for a national security and intelligence debate surrounding my confirmation, however untrue, to become a purely political and partisan issue," Ratcliffe said. "The country we all love deserves that it be treated as an American issue.

"Accordingly, I have asked the President to nominate someone other than me for this position."

Coats, the current DNI chief, announced Sunday that he would be stepping down on August 15.

Coats did not always see eye-to-eye with Trump on a range of issues while serving as the official who oversees and coordinates the CIA, the National Security Agency and other US intelligence bodies.