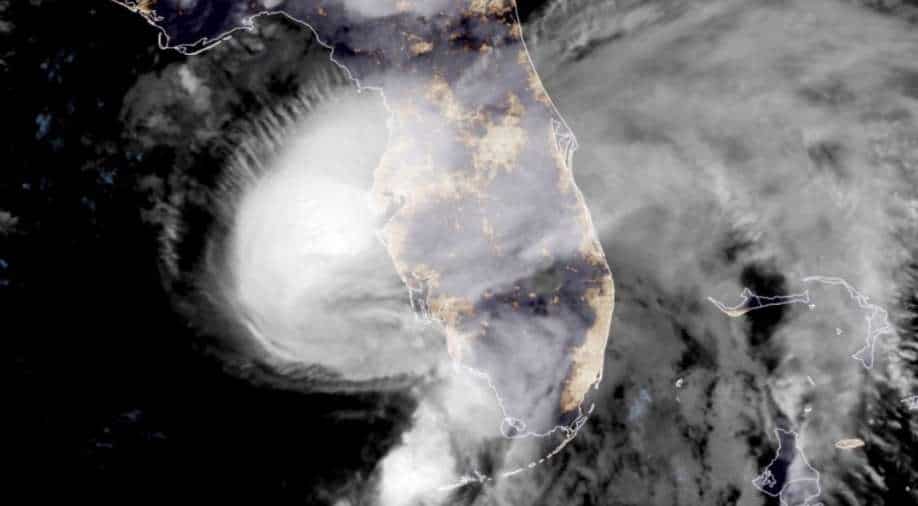 This National Oceanic and Atmospheric Administration (NOAA) satellite image taken at 00:20 UTC on July 7, 2021 shows Tropical Storm Elsa above the US state of Florida after moving up from Cuba in the Caribbean Photograph:( AFP )

After battering Cuba with drenching rain and strong winds, Elsa regained hurricane strength as it closed in on Florida, where rescue workers pressed on with their search of the debris of a Miami condominium that collapsed almost two weeks ago

"Elsa is forecast to make landfall along the north Florida Gulf Coast by late Wednesday morning and then move across the southeastern United States through Thursday," the US National Hurricane Center said.

Florida Lieutenant Governor Jeanette Nunez called on state residents to start preparing for the storm, including the possibility of power blackouts, and asked people to stockpile adequate supplies of food and water.

"If you are asked to evacuate, please leave," she said, reminding people that there were emergency shelters ready to accommodate them.

Elsa left a trail of destruction through the Caribbean, claiming at least three lives. It was logged as the first hurricane of this year's Atlantic season on Friday before being downgraded Saturday to a tropical storm again, and then back up to a hurricane Tuesday.

Over 100,000 people were evacuated from coastal or low-lying areas as the storm cut through Cuba, with the nation's meteorological institute Insmet reporting winds of up to 100 kilometers (62 miles) per hour.

But its forecasted westward path meant Florida appeared set to avoid the worst of the storm, with the southwest coast of the state set to experience a glancing blow rather than the direct hit expected earlier.

In Surfside, on Florida's east coast, workers on Sunday used explosives in the controlled demolition of the still-standing portion of a collapsed condo building, a job accelerated for fear Elsa might topple the structure.

The condo disaster left 36 confirmed deaths, but another 109 people are still listed as missing.

On Monday, Miami-Dade County Mayor Daniella Levine Cava told CNN that officials were "very hopeful" that, with Elsa's current path, they would not have to pause search-and-rescue efforts after all.

The 200 or so search and rescue workers on the rubble pile carried on their operations all through Tuesday, despite strengthening wind and rain.

Since excavations began over a week ago, more than two tons of rubble have been removed from the site.

Meanwhile, as Elsa swept Cuba, states of alarm were sounded in the provinces of Havana, Mayabeque, and Artemisa as thousands were evacuated from their homes -- efforts complicated by Covid-19 as Cuba endured its worst chapter yet of the pandemic.

Shops closed in Havana and driving was restricted to civil defense vehicles.

Elsa claimed two lives in the Dominican Republic and a third in the island state of Santa Lucia during its earlier approach through the Caribbean, the Caribbean Disaster Emergency Management Agency (CDEMA) said.

Cuban President Miguel Diaz-Canel said late Sunday on Twitter that there had only been damage to farm crops.

Elsa's advent represented the earliest date ever that a fifth named storm, which does not typically arrive before August, has struck the region.