Tasmanian tigers are extinct. Why do people keep seeing them? 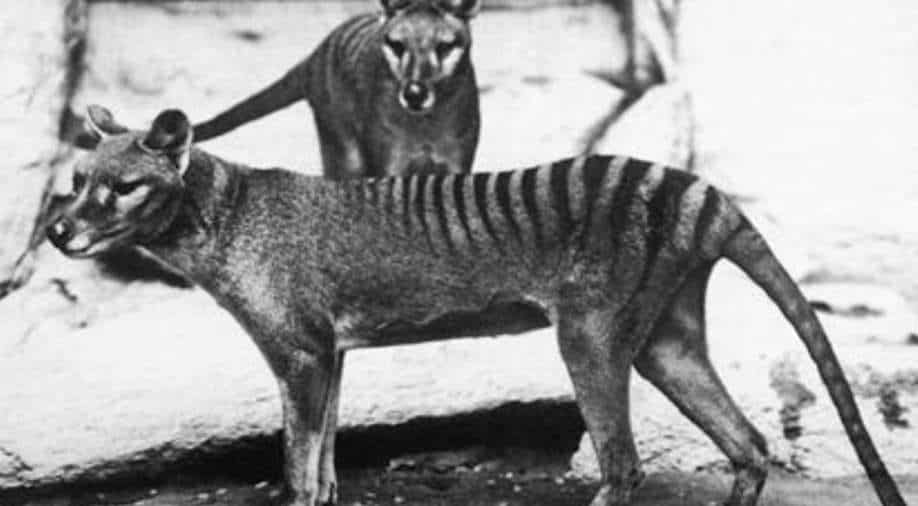 In 2005, a WWF camera-trap caught footage of a “mystery carnivore” — likely a flying squirrel — in the jungle of Indonesian Borneo. In 2007, 2011 and 2014, clips of hairless dogs and raccoons in Texas were described as chupacabras.

The Tasmanian tiger is still extinct. Reports of its enduring survival are greatly exaggerated.

Known officially to science as a thylacine, the large marsupial predators, which looked more like wild dogs than tigers and ranged across Tasmania and the Australia mainland, were declared extinct in 1936. But on February 23, Neil Waters, president of the Thylacine Awareness Group of Australia, promised conclusive photographic proof of a surviving thylacine. The four photos, he claimed, showed a family of thylacines, including a juvenile, moving through dense brush. The announcement kicked off a flurry of excitement among wildlife aficionados.

But, analysis by thylacine specialists rapidly debunked the photos as a case of mistaken identity. The event is the latest in a tradition of extravagant claims about photographic or video evidence of lost or unknown species that don’t pan out. Why do these cycles occur so regularly, at times even convincing experts? The answer, psychologists say, may lie in quirks of the human mind and how we process information that is at once familiar and difficult to perceive.

While such footage occasionally turns out to be a hoax, many stills and videos genuinely show real animals — even if they aren’t what people say they are. In 2005, a WWF camera-trap caught footage of a “mystery carnivore” — likely a flying squirrel — in the jungle of Indonesian Borneo. In 2007, 2011 and 2014, clips of hairless dogs and raccoons in Texas were described as chupacabras.

The same year, a kayaker recorded footage that purported to show an extinct ivory-billed woodpecker in an Arkansas swamp, provoking heated coverage and broad scientific interest. Many experts eventually concluded that the bird was more likely a pileated woodpecker.

It’s not impossible for species presumed extinct to reappear. Last month, news of the rediscovery of the Black-Browed Babbler, missing since the 1840s, emerged after two Indonesian men caught and photographed a specimen. A day later, an entomologist announced the discovery of a tiny population — just six specimens — of the Australian cloaked bee, last seen in 1923.

That’s part of why the prospect of thylacine footage was so compelling to hopeful researchers. Unlike Bigfoot or Nessie, such animals were unquestionably real, were well photographed while alive and went extinct almost within living memory. Catching a photo of one doesn’t necessarily seem like a stretch.

And in the age of smartphones, cameras are everywhere. In fact, footage snapped by camera traps or amateur naturalists can help establish the presence and activity patterns of animals in the environment, said Holly English, a doctoral student in wildlife ecology and behaviour at University College Dublin.

“There are animals that visit my own garden that I only know about through camera trapping,” English said.

Photos can also help reveal animals living in unexpected places. Her research on breeding populations of exotic wallabies in Britain, for instance, relied partially on images shared over social media.

Susan Wardle, a neuroscientist at the National Institutes of Health in the United States, says that cycles of expectant belief undone by deeper analysis may in part be explained by human psychological quirks.

Processing every individual sensory detail is impossible, she says, so our brain actively reconstructs our visual world based on the complex but ambiguous input received by our eyes. Research has shown that unclear sensory data — such as a blurry picture — causes the brain to rely more heavily on preconceived patterns to make sense of it.

“This means that there is an interesting interaction between perception and cognition — our beliefs and prior experience can influence what we see. Or more accurately, what we think we see,” Wardle said.

This tendency can lead people astray when studying photographic evidence of long-unseen animals, sometimes called cryptids, especially if they already have an idea of what they’re looking for. Many people who go looking for such enigmatic creatures have an emotional investment in identifying them, “and are already convinced the creatures are already out there,” said Christopher French, who founded the Anomalistic Psychology Research Unit at Goldsmiths, University of London, and recently retired.

That preexisting belief makes it easier to begin seeing quarry in every shadow and rustle of brush, French adds, or in photographs that don’t offer a clear look at the animal in question. It can also cause people to genuinely miss details that might contradict their preferred hypothesis.

In a YouTube video posted Feb. 23, Waters, formerly a professional horticulturist, claimed that he’d captured footage that proved the thylacine lived. Walking past a landscape of felled trees, he described setting camera traps in the Tasmanian bush, and catching four “not ambiguous” still images of a thylacine family.

Thylacine populations began declining soon after European settlers arrived on Tasmania, an island south of the Australian mainland, in 1803, winnowed by government-encouraged hunting, competition from wild dogs, habitat loss and disease. The last known individual, “Benjamin,” died in captivity in 1936, leaving behind only haunting bits of film footage.

There were reported sightings in the decades that followed, which lured multiple expeditions in Tasmania’s wilderness to search for survivors, said Darren Naish, a paleozoologist at the University of Southampton in England. None were successful. Yet reported sightings continued and even increased in the 1980s, and are still reported today.

“That suggested that sightings were a social phenomenon, not a zoological one,” Naish said.

Waters sent his photographs to the Tasmanian Museum and Art Gallery for analysis by Nick Mooney, a thylacine expert. He and his colleagues debunked Waters’ claims.

“TMAG regularly receives requests for verification from members of the public who hope that the thylacine is still with us,” the museum said in a statement. “Based on the physical characteristics shown in the photos provided by Mr Waters, the animals are very unlikely to be thylacines.”

Instead, it said they are most likely Tasmanian pademelons, a stout little marsupial resembling a wallaby.

Many thylacine sightings are similar misidentifications, said Adam Pask, a thylacine researcher at the University of Melbourne. “There are quite a few wild dogs roaming around Tasmania,” Pask said. “So it’s very easy to spot a ‘thylacine’ looking animal in the bush if you look hard enough, and want to see one enough.”

These kinds of mistakes are common, Naish said, in part because even experienced outdoors people and researchers are not always adept at identifying animals from unfamiliar angles or in unfamiliar states. Size and distance can be hard to judge in photographs, causing domestic cats to resemble big cats. Subtract fur, as in the occasional rotting raccoon carcass or mangy fox, and even familiar mammals can look deeply uncanny — or like an extinct marsupial predator.

“We all make mistakes: even the most experienced naturalists make misidentifications, sometimes hilarious ones,” Naish said. However, those dedicated to hunting cryptic animals are often primed to accept more ambiguous footage, while dismissing critical opinions from qualified experts.

“The single most pervasive cognitive bias we all suffer from is confirmation bias,” French said. If you’re invested in finding the cryptid you’re searching for, you’re more likely to find the evidence convincing.

On March 1, Waters — who did not return multiple requests for comment — released the photos as part of a 19-minute video, urging viewers to “make up their own mind.” In a subsequent interview with News.com.au, he said that the response to his photos by expert analysts gave him “more fire in my belly to prove them wrong.”

“It won’t be much longer,” Waters said. “Because we’re very close to getting irrefutable proof the animal is still here.”