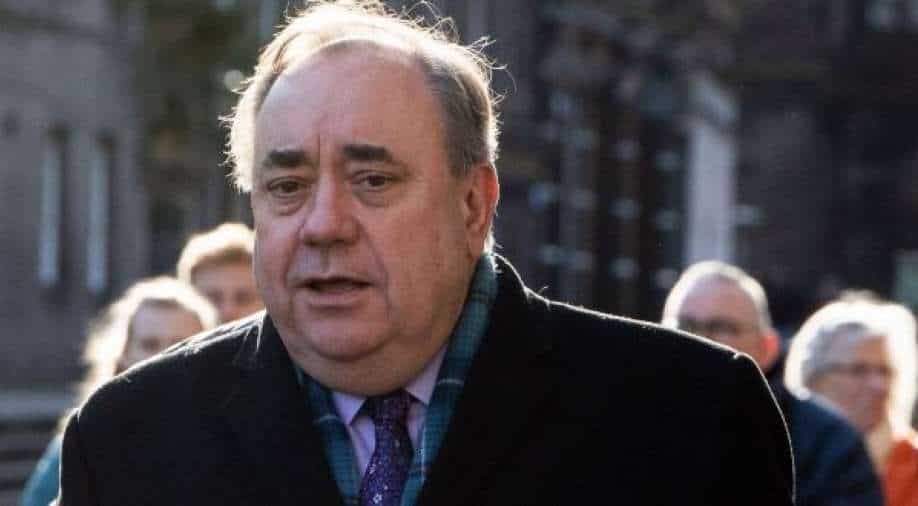 Salmond added the surprise move, which follows months of clashes with his successor Nicola Sturgeon over her handling of sexual harassment claims against him, would aim to deliver a "supermajority" for independence in the elections.

The former Scottish National Party (SNP) leader, who was first minister from 2007 to 2014 before stepping down after losing a referendum on independence, said the Alba Party would be a "new political force" complementing the SNP.

Salmond added the surprise move, which follows months of clashes with his successor Nicola Sturgeon over her handling of sexual harassment claims against him, would aim to deliver a "supermajority" for independence in the elections.

The 66-year-old, who was cleared of all criminal wrongdoing over the allegations, is one of four candidates to have so far declared they will stand for the party.

Scotland holds elections for its devolved parliament in Edinburgh on May 6, with the SNP hoping to use the results to push for a fresh poll on independence, which UK Prime Minister Boris Johnson is firmly against.

The Scottish public appear evenly split on support for the country breaking away from the United Kingdom, according to recent surveys.

"Boris Johnson has already said no to the SNP proposals. He will find it much more difficult to say no to a parliament and a country," Salmond said at a virtual party launch event.

The veteran politician was keen to stress that the new party -- which takes its name from the Scots Gaelic for Scotland -- was not a direct challenge to the SNP and would urge people to vote tactically.

However, in a promptly issued statement the SNP said Scotland's interests "should not be obscured by the self-interest of someone who shows no sign whatsoever of reflecting on serious concerns about his own conduct".

A party spokesman added the accusations Salmond faced "raise real questions about the appropriateness of a return to public office".

The 129 Members of the Scottish Parliament (MSPs) are elected on the additional member system, with each elector having two votes.

The first elects 73 constituency MSPs, including Sturgeon, by the "first past the post" system.

The second selects seven regional MSPs from each of eight parliamentary regions by party list, to ensure better representation in the legislature.

Alba only intends to stand in the regional list, with the hope of securing wider backing for independence in parliament, and will urge people to vote for the SNP in constituencies.

The SNP has already said it will ask the UK government to allow another referendum, as Scots voted overwhelmingly against Brexit in 2016.

But Johnson has repeatedly refused to grant Edinburgh the powers to do so, arguing the 2014 vote was a "once in a generation" event.

Salmond said having "supermajority" support among MSPs for independence would change "the balance fundamentally into Scotland's favour".

"If you don't... then Boris Johnson will say, this is an SNP fascination," he added.

Salmond's return to frontline politics comes after weeks of tumult over his incendiary attacks on his former friend and protegee Sturgeon, as a bitter row between the independence movement's most dominant figures has played out in public.

She was cleared last week of misleading the Scottish Parliament over the sexual harassment allegations scandal, and easily survived a no-confidence vote brought by Scottish Conservatives.

Despite the rift with her and the SNP, which he has accused of a politically motivated smear campaign, Salmond said Alba's campaign would be "entirely positive".

He also defended his past behaviour. "We've seen two court cases, two judges, one jury and I'm prepared to accept all of these," Salmond said, referring to his acquittal last year by a jury.

However, opinion polls show his own personal standing has been severely dented.

While 58 percent of people saw Sturgeon favourably, only 14 percent felt the same towards Salmond, with nearly three-quarters registering unfavourable opinion of him, according to polling by Opinium Research and Sky News.