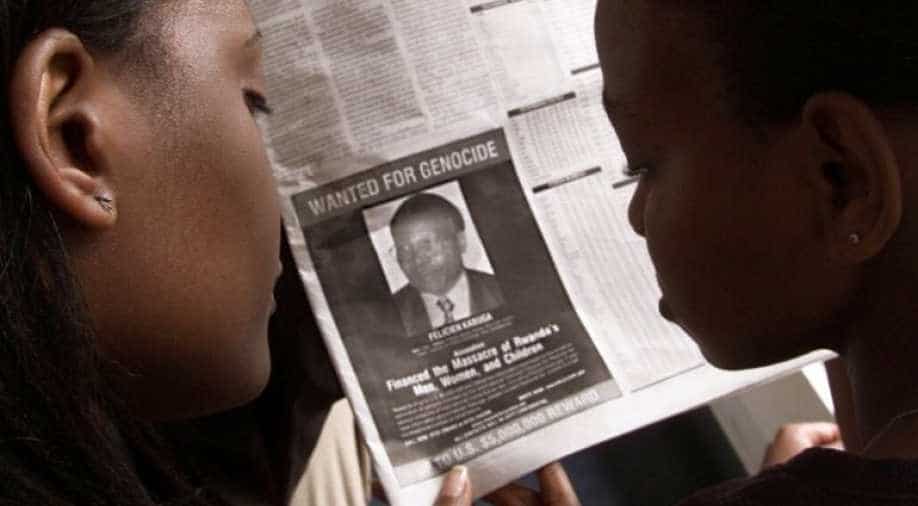 Readers look at a newspaper June 12, 2002 in Nairobi carrying the photograph of Rwandan Felicien Kabuga wanted by the United States Photograph:( Reuters )

The 84-year-old, who is Rwanda's most-wanted man and had a $5 million US bounty on his head, was living under a false identity in a flat in Asnieres-Sur-Seine, according to the ministry.

Rwandan genocide suspect Felicien Kabuga, who is accused of funding militias that massacred about 800,000 people, was arrested on Saturday near Paris after 26 years on the run, the French justice ministry said.

The 84-year-old, who is Rwanda's most-wanted man and had a $5 million US bounty on his head, was living under a false identity in a flat in Asnieres-Sur-Seine, according to the ministry.

French gendarmes arrested him at 0530 GMT on Saturday, the ministry said.

Kabuga was indicted in 1997 on seven criminal counts including genocide, complicity in genocide and incitement to commit genocide, all in relation to the 1994 Rwanda genocide, according to the UN-established International Residual Mechanism for Criminal Tribunals (IRMCT).

Rwanda's two main ethnic groups are the Hutus and Tutsis, who have historically had an antagonistic relationship and fought a civil war in the early 1990s.

A Hutu businessman, Kabuga is accused of funding the militias that massacred some 800,000 Tutsis and moderate Hutus over a span of 100 days in 1994.

"Since 1994, Felicien Kabuga, known to have been the financier of Rwanda genocide, had with impunity stayed in Germany, Belgium, Congo-Kinshasa, Kenya, or Switzerland,"

The arrest paves the way for bringing the fugitive in front of the Paris Appeal Court and later to the international court in The Hague, it added.

"The arrest of Félicien Kabuga today is a reminder that those responsible for genocide can be brought to account, even twenty-six years after their crimes," IRMCT's Chief Prosecutor Serge Brammertz said in a statement immediately after the arrest.

He added the arrest was the result of cooperation between law enforcement agencies in France and other countries including the US, Rwanda, Belgium, the United Kingdom, Germany, the Netherlands and others.

Kabuga was responsible for making purchases of large quantities of machetes, hoes, and other agricultural implements in the knowledge that they would be used as weapons of murder during the genocide, according to a UN news website.