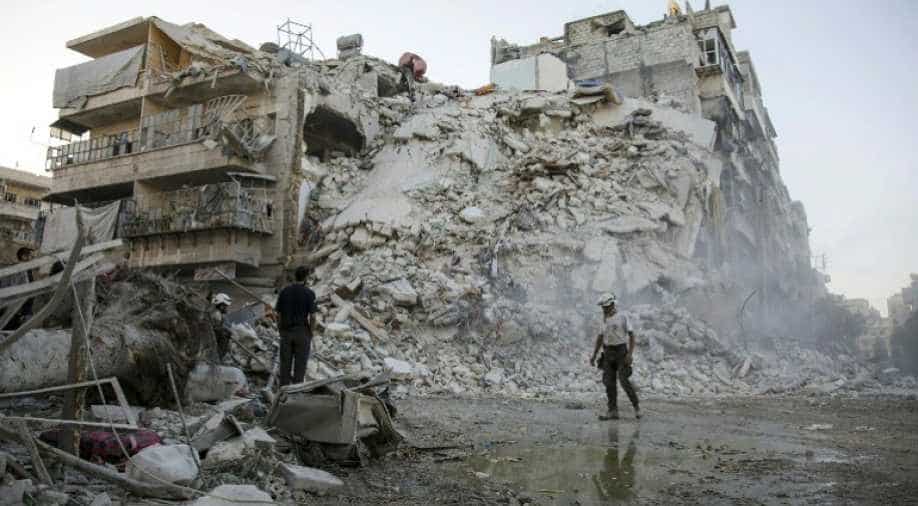 Russian jets stepped up strikes on several towns in Syria's rebel-held Idlib province and rural Aleppo two days after the evacuation of rebels from their last pocket in the northern city of Aleppo, rebels and residents said on Saturday.

They said at least eight strikes targeted Binish, Saraqeb and Jisr al Shaqour - main towns in the northwestern Syrian province of Idlib. There were reports of several casualties, mainly among civilians.

Idlib province for months has been a target of Russia's heavy bombing campaign against rebel-held areas. It came even while the former eastern part of Aleppo under insurgent control faced an escalation in aerial raids and shelling until its defences collapsed and the rebels were forced to agree to an evacuation deal.

The Syrian army has hinted the next major campaign after its victory in Aleppo was to rout insurgents in their stronghold of Idlib province, where mainly Islamist brigades operating under a coalition known as Jaish al Fateh are in control.

Residents and rebels said Russian and Syrian jets also staged heavy strikes on rebel-held parts of western and southern parts of rural Aleppo for the second day since the last rebels left their remaining pocket of territory in Aleppo city.

They raided the town of Khan al Asal, about 14 km (9 miles) west of Aleppo, with cluster bombs while several strikes hit Hreitan and Andan, according to a rebel fighter from Jaish al Mujahdeen. The nearby town of Atareb was also hit.

Although the Syrian army, with the help of Iranian-backed militias, was able to take full control of Aleppo city after Russia conducted hundreds of raids that pulverised rebel-held parts, large swathes of western and southern Aleppo countryside remain in rebel hands.

Rebels said they repelled an Iranian-backed militia assault on Saturday to gain ground in the Rashideen area, west of Aleppo city.