Russia says it has begun scaling down military deployment in Syria 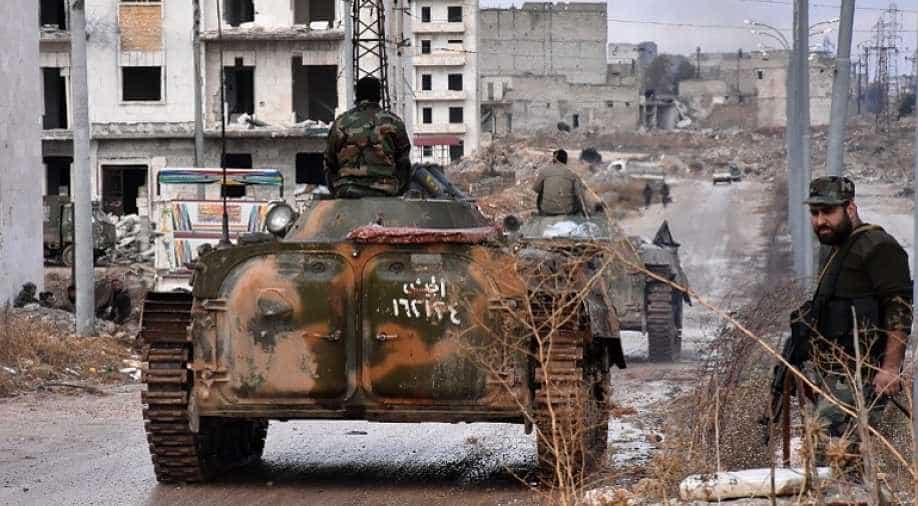 Russia, along with fellow regime ally Iran and rebel backer Turkey, is pushing for peace talks to be held later this month in Kazakhstan. In photo: Syrian pro-government forces set up an outpost on December 2, 2016. Photograph:( AFP )

Russia's military said on Friday it has begun scaling down its deployment to Syria, as the regime intensified its bombardment of a rebel-held district home to the capital's main water source.

Moscow's intervention in September 2015 helped turn the tide in favour of President Bashar al-Assad, whose forces scored a major victory last month with the recapture of opposition stronghold east Aleppo.

Russia, along with fellow regime ally Iran and rebel backer Turkey, is pushing for peace talks to be held later this month in Kazakhstan.

But escalating fighting near Damascus, including reported barrel bombings, has undermined a fragile week-old nationwide ceasefire and left the talks in doubt.

The planned negotiations are the latest diplomatic initiative aimed at ending a nearly six-year conflict that has killed more than 310,000 people and forced millions to flee their homes.

Russia's military said a naval group headed by aircraft carrier Admiral Kuznetsov would be the first to leave the area under a drawdown ordered by President Vladimir Putin on December 29.

"The tasks set for the aircraft carrier group during its military mission have been fulfilled," said Russia's main commander in Syria, Andrei Kartapolov, quoted by Russian news agencies.

Aircraft on board the carrier conducted some 420 sorties and hit 1,252 "terrorist" targets during the two months that it was involved in the Syria mission, Kartapolov said.

He said that Russia still had sufficient air defence capabilities thanks to its S-300 and S-400 systems deployed in the war-torn country.

The Kuznetsov arrived off Syria in November as Russia boosted its firepower on land and in the Mediterranean to support regime forces targeting Aleppo.

The fall of the rebel-held east of the city was the regime's biggest victory in more than five years of fighting.

Thousands of civilians and rebels left the besieged opposition enclave last month under a deal brokered by Moscow and Ankara.

During its deployment to Syria, the Soviet-built Kuznetsov was involved in a series of embarrassing accidents, with two jets crashing into the sea.

Moscow had already announced a partial withdrawal of Russian forces in March 2016, but later ramped up its presence again as fighting increased.

Putin's latest announced drawdown coincided with the declaration of a ceasefire between government and rebel forces that has led to sharp drop in fighting.

A major exception has been the rebel-held area of Wadi Barada near Damascus where the regime has stepped up air strikes as the rival sides trade blame over a cut to mains supplies to the capital.

Damascus has been without water from Wadi Barada since December 22.

The United Nations said on Thursday that 5.5 million people had been affected, warning that sabotaging water supplies was a war crime.

Turkey, which has worked closely with Russia to broker the ceasefire, has warned that the fighting is jeopardising the planned talks in Kazakhstan.

Government aircraft on Friday dropped at least 10 barrel bombs, crude munitions notorious for the indiscriminate casualties they cause, on Wadi Barada, the Syrian Observatory for Human Rights said.

A child was killed as clashes resumed in the area between pro-government forces and rebel fighters led by the jihadist Fateh al-Sham Front, the British-based monitor said.

East of the capital, clashes broke out in the Marj district. Three people were killed, one of them a child, according to the Observatory, which has a network of sources on the ground.

In Damascus, there were a number of casualties from rebel rocket fire.

Fateh al-Sham, formerly known as Al-Nusra Front, was Al-Qaeda's Syrian affiliate and remains blacklisted as a terror group by the United Nations and Western governments.

Along with its jihadist rival, the Islamic State group, it is not party to the week-old ceasefire brokered by Russia and Turkey.

But rebels deny Fateh al-Sham is in the Wadi Barada area.

Syria's main opposition coalition urged the UN Security Council on Thursday to put an "immediate" halt to what it said were regime violations of the truce.

It accused Assad's regime of "violations and war crimes" in Wadi Barada.