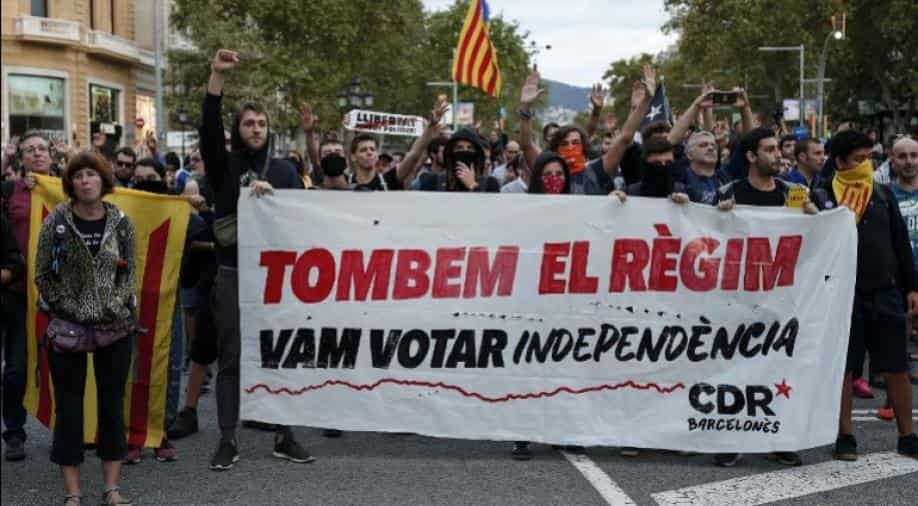 Pro-independence protesters obstructed major roads and a high-speed railway line in Spain's Catalonia region on Monday, one year after a banned referendum on secession that was marred by police violence.

Hundreds of activists, many covering their faces with scarves, occupied high-speed railway tracks in Girona, north of the Catalan capital of Barcelona.

Central streets in Barcelona and Lleida were blocked, as was the AP-7 motorway which leads to the French border, and A2 linking Barcelona to Madrid, images on Catalan TV showed.

The high-speed rail service linking Figueres, Girona and Barcelona "was interrupted" since the "tracks in Girona are occupied," Spanish state-owned rail operator Renfe said on Twitter.

The protests were called online by a grassroots group calling itself the Committees for the Defence of the Republic (CDRs), founded to help stage last year's banned referendum and now demanding a clean break with the Spanish state.

The group tweeted a picture of a red, yellow and blue Catalan separatist flag on the track of the station in Girona as protesters stood around it.

Twenty-four people were injured and six detained on Saturday during a rally -- and a counter demonstration -- in Barcelona by police paying tribute to colleagues deployed to prevent the 2017 Catalan independence referendum.

The Catalan government, then led by Carles Puigdemont, on October 1, 2017, pushed ahead with a referendum on independence for the region despite it having been deemed illegal by the Spanish courts. The vote was marred by a violent police crackdown on polling stations.

Even if it was illegal and therefore non-binding, 2.3 million people cast their ballots out of 5.5 million eligible voters, 90 percent of whom voted to break from Spain. Opponents of independence largely boycotted the vote.