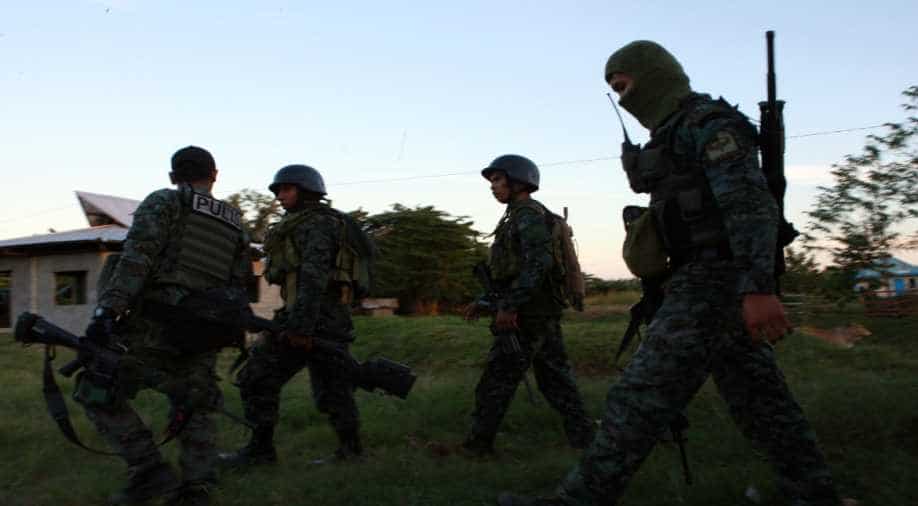 Army troops hunting down Abu Sayyaf units clashed with about 130 of the gunmen near the Jolo town of Patikul, killing a soldier and wounding six others. Photograph:( Getty )

The gun battles on the southern islands of Jolo and Basilan followed orders by new President Rodrigo Duterte for the security services to go after the Abu Sayyaf, which recently beheaded two foreign hostages and is also blamed for the worst terror attacks in Philippine history.

"Continuous indirect fire support and air strikes are being done and additional troops were deployed," he added without giving details.

Army troops hunting down Abu Sayyaf units clashed with about 130 of the gunmen near the Jolo town of Patikul, killing a soldier and wounding six others, Tan said.

Meanwhile up to 200 Abu Sayyaf gunmen have been fighting running gun battles with government forces in three Basilan towns since late Wednesday, Tan said, but did not say if there were casualties.

The Jolo militants are believed to be holding a Norwegian resort manager abducted elsewhere in the south in September last year and a Dutch birdwatcher kidnapped in 2012.

Tan did not reply when asked about the impact of the fighting on the hostages.

The Abu Sayyaf beheaded in April and June two Canadian tourists who were kidnapped along with the Norwegian, while a Filipina who was abducted with them was freed last month.

The Abu Sayyaf is a loose network of a few hundred Islamic militants, formed in the 1990s with seed money from Osama bin Laden's Al-Qaeda network, that has earned millions of dollars from kidnappings-for-ransom.

Although its leaders have pledged allegiance to Islamic State, analysts say they are mainly focused on lucrative kidnappings.

Last month, as Duterte prepared to assume office after winning the May presidential elections by landslide on a law and order platform, he ordered the military defeat the Abu Sayyaf.

"Our first priority is the Abu Sayyaf because that is the order of our new president: address the Abu Sayyaf immediately so we can neutralise them," Delfin Lorenzana told reporters before he was sworn in as defence secretary.