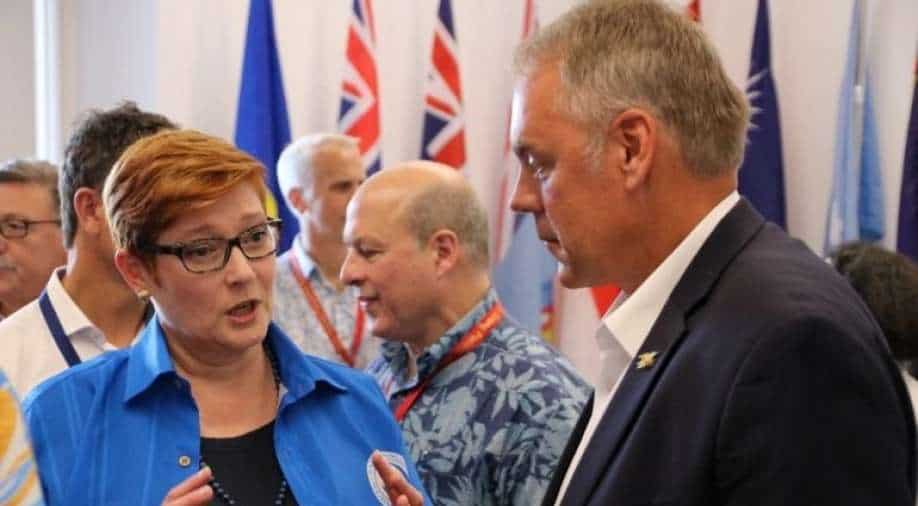 US Secretary of Interior Ryan Zinke (R) listens to Australia's Foreign Minister Marise Payne (L) during the Pacific Islands Forum (PIF) at the Civic Center in Aiwo on the island of Nauru Photograph:(AFP)
Follow Us

The United States and its Pacific allies have concerns that cables laid by China could compromise regional security. Beijing has denied any intent to use commercial optic fibre cables, which have far greater data capacity than satellites, for spying

The Pacific island of Nauru is negotiating for the construction of an undersea communications cable that would connect to an Australian network, two sources with knowledge of the talks told Reuters, after the earlier rejection of a Chinese proposal.

The United States and its Pacific allies have concerns that cables laid by China could compromise regional security. Beijing has denied any intent to use commercial optic fibre cables, which have far greater data capacity than satellites, for spying.

Nauru, which has strong ties to US ally Australia, helped scupper a World Bank-led cable tender earlier this year over concerns the contract would be awarded to the former Huawei Marine, now called HMN Tech, after the Chinese firm lodged a bid priced at more than 20 per cent below rivals.

The tiny Pacific nation of just over 12,000 people has now approached the Asian Development Bank (ADB) to help fund an alternative, the development agency told Reuters.

"ADB is involved in very early discussions with the government of Nauru to explore possible options to help fund an undersea cable to deliver low-cost, high quality internet service," the ADB said in a statement to Reuters.

"The details of the connection arrangement and funding sources will be determined in due course."

The two sources said the new plan would involve laying a cable from Nauru to the Solomon Islands capital of Honiara, located about 1,250 kilometres (776.7 miles) apart.

The new line would then tap into the Coral Sea Cable system, a 4,700km network that connects Australia to the Solomons and Papua New Guinea. That line, majority funded by Australia and built by Sydney-headquartered Vocus Group, was completed in 2019 to shut out a competing offer from Huawei Marine, then owned by Huawei Technologies.

Nauru's plan needs Australia and the Solomons to be on board, the sources said. It is unclear if Nauru has requested financial assistance from Australia or whether it only needs Canberra's permission to join the Coral Sea Cable system.

One source, who has direct knowledge of the planned cable route, described the talks as "early stage negotiations".

The second source provided information about discussions between Nauru officials and the ADB, Australia and the Solomons. The source said Nauru was in the process of "doing a deal".

The governments of Nauru, Australia and the Solomons did not respond to requests for comment. The World Bank said it was not involved in discussions around cables connecting with Nauru.

Nauru was the first to raise concerns over a bid lodged by China's HMN Tech during the World Bank tender process last year to build subsea cables for Nauru, Federated States of Micronesia and Kiribati, sources told Reuters in December. The United States followed up by warning the Pacific island nations that the HMN Tech bid posed a regional security threat.

The project then unravelled after the island governments heeded the U.S. warnings and declined to award a contract.

"The Chinese government has always encouraged Chinese enterprises to carry out investment cooperation in various fields in accordance with market principles and international rules and on the basis of abiding by local laws," said Zhao Lijian, a spokesman at the Chinese foreign ministry.

"Chinese enterprises have always maintained a good record in network security, and the so-called Chinese espionage activities are groundless," Zhao told a regular press conference on Thursday, when asked about the undersea cable plan.

Australia has ramped up its presence in the Pacific through the creation of a A$2 billion ($1.5 billion)infrastructure financing facility and via its membership of the new "Quad" group, together with the United States, India and Japan, to counter China's expanding interests in the Indo-Pacific.

Australia is also part of a trilateral partnership with the United States and Japan that was formed to finance an undersea optic fibre cable for Palau, another Pacific nation.

Washington has pressed governments around the world to squeeze Huawei and other Chinese companies out of supplying sensitive communications equipment, alleging the company could hand over data to the Chinese government for spying, a charge denied by Beijing and Chinese telcos.

A Chinese foreign ministry spokesperson said in a statement to Reuters last week that Chinese companies had an excellent record in cyber security and that they needed to be able to participate in a non-discriminatory business environment.

Nauru, located in the central Pacific, has retained diplomatic ties to Taiwan, creating tension with China, which regards Taiwan as its own territory. Hosting a major Pacific forum in 2018, Nauru's then president, Baron Waqa, described a Chinese envoy as "very insolent" and a "bully" after an angry exchange between officials.