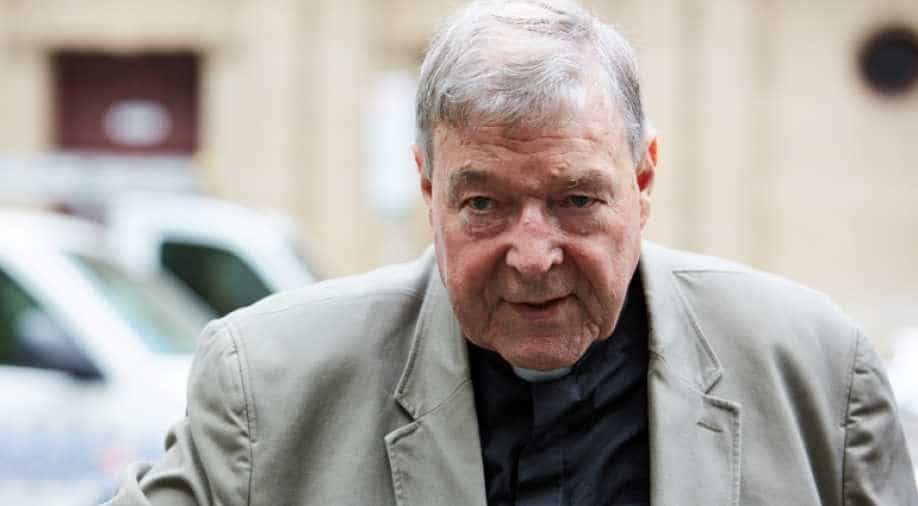 The 77-year-old is facing up to 50 years' jail after being convicted on five counts of sexual and indecent assault of the two choirboys in 1996-97, shortly after he became Archbishop of Melbourne.

Convicted Australian Cardinal George Pell has shown "no remorse" for his assault of two choirboys, prosecutors said Wednesday as they called for immediate imprisonment after his historic conviction for child sex crimes.

Once among Pope Francis' closest advisors and the most senior Catholic cleric ever found guilty of child sex crimes, Pell was harangued by angry protesters who called him a "maggot" and a "monster" as he arrived at a Melbourne court for a pre-sentencing hearing a day after his conviction was made public.

The 77-year-old is facing up to 50 years' jail after being convicted on five counts of sexual and indecent assault of the two choirboys in 1996-97, shortly after he became Archbishop of Melbourne.

Pell is appealing the verdict.

Prosecutors told Wednesday's pre-sentencing hearing that Pell had "shown no remorse" for his actions.

"He has not taken responsibility for his actions. There remains no explanation for this offending," Crown Prosecutor Mark Gibson told the County Court of Victoria.

"There has been a breach of trust... Cardinal Pell was the driving force... and in charge of the cathedral, and these choristers were cogs in the cathedral wheel."

Pell is expected to be remanded in custody following Wednesday's submissions after his legal team suddenly withdrew an earlier application for bail pending his appeal, a process which could take months.

His barrister Robert Richter argued Pell's behaviour was not premeditated, and that he had 10 character references from individuals and "none of them believe him capable of this".

"This is a court of law, not a court of morals," he told Chief Justice Peter Kidd.

'You're evil'
The revelation on Tuesday of Pell's conviction has rocked Australia and dominated the news. A large media pack and crowd confronted the cardinal as he arrived in court, with one protester screaming: "You're a maggot, Pell, you rot in hell."

Shortly before Wednesday's hearing, Vatican spokesman Alessandro Gisotti announced on Twitter that Pell had been removed from his position as chief of Vatican finances, the third-most powerful position in the Church.

The Vatican said earlier it had "utmost respect" for the Australian justice system following the "painful news" of Pell's conviction.

The Cardinal was found guilty in December of assaulting the two choirboys in the sacristy of Melbourne's Saint Patrick's Cathedral, but the verdict was only revealed Tuesday after a second trial against him was abandoned by prosecutors, allowing a gag order to be lifted.

He was due to be remanded in custody in December but that was delayed until the pre-sentencing hearing as his lawyer said he required urgent double knee surgery.

Pell has already appealed the verdict and his lawyer told the court Tuesday it would be based on three grounds -- that the jury verdict was unreasonable, that an animation showing movements of people in the cathedral on the day of the alleged abuse was rejected, and that there were issues with how the jury was formed.

Pell is expected to be sentenced in the next two weeks.

The Court of Appeal process, which could last up to a year, will see a bench usually made up of three judges review the same evidence that the jurors were presented within the earlier trial.

Criminal law expert Jeremy Gans of the University of Melbourne told AFP the judges could question the jury's conclusions based on the fact that the case was based on only one person's -- the surviving victim's -- testimony.

The other choirboy, who died of a drug overdose in 2014, had never told his parents he was abused.