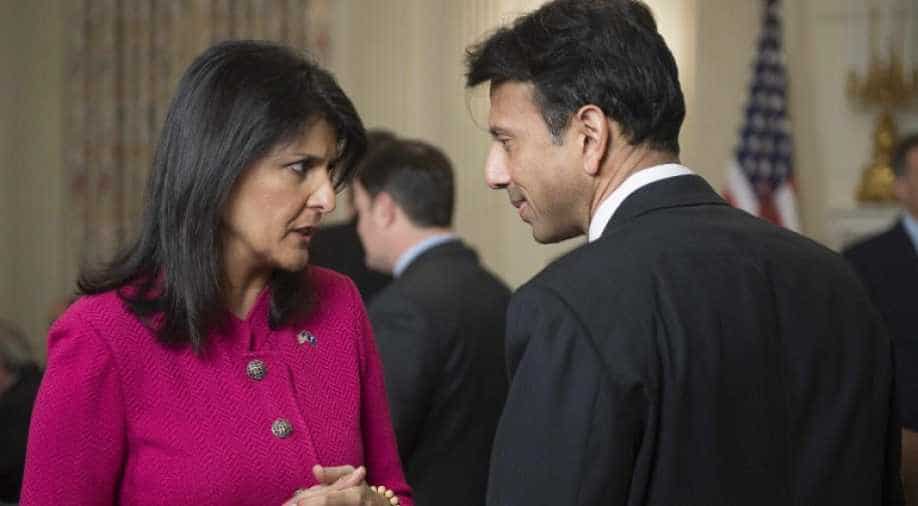 Nikki Haley with Louisiana Governor Bobby Jindal at a meeting of the National Governors Association in Washington in 2015. Photograph:( AFP )

Nikki Haley was today named as US ambassador to the United Nations by President-elect Donald Trump, becoming the first Indian-American to be appointed to a cabinet-level post in any US administration, PTI reported.

"Governor Haley has a proven track record of bringing people together regardless of background or party affiliation to move critical policies forward for the betterment of her state and our country," Trump said

A former critic of Trump, the 44-year-old Haley is the first woman tapped by Trump for a top-level administration post during his transition to the White House.

"She is also a proven dealmaker, and we look to be making plenty of deals. She will be a great leader representing us on the world stage," PTI reported Trump as saying.

The presidential transition team said this would a cabinet-level position in the Trump-Pence administration and would require confirmation by the Senate.

"Our country faces enormous challenges here at home and internationally, and I am honoured that the President-elect has asked me to join his team and serve the country we love as the next Ambassador to the United Nations," Haley said, commenting on her nomination to the key post.

After working at her family's business, Haley turned her focus to economic development and has travelled abroad to negotiate with international companies on behalf of South Carolina.

As governor, she has led seven overseas trade missions and successfully attracted jobs and investment through negotiations with foreign companies, PTI reported from the official announcement.

Haley, currently serving the second term as governor, has served as her home state's first female and first minority governor.

The country's youngest governor has worked on trade and labour issues although she has little foreign policy experience.

Haley was critical of Trump during the primary campaign and had backed Senator Marco Rubio in the Republican primary. However, before the general elections, she switched her position, saying she would vote for Trump.