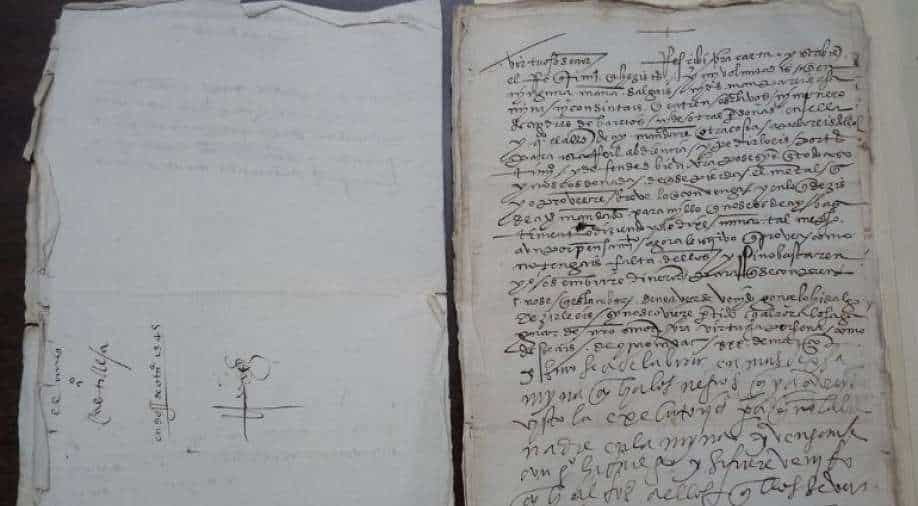 In September, a New York auction house had a rare treasure up for sale: a five-centuries-old letter revealing political intrigue involving Hernán Cortés, the famed leader of the Spanish force that colonized what is modern-day Mexico.

Cortés papers seldom come to market. The 1521 document, offered by Swann Galleries, was expected to fetch $20,000 to $30,000. That is, until a plucky group of academics in Mexico and Spain helped thwart the sale.

Searching online catalogues of global auction houses and mining one of the researchers' personal trove of photos of Spanish colonial documents, they traced its provenance to the National Archive of Mexico (AGN), the nation's equivalent of the National Archives in Washington. An image of that 1521 letter captured by a Mormon genealogy project would play a supporting role.

What's more, these amateur detectives unearthed nine additional Cortés-linked papers put on the block from 2017 to 2020 in New York and Los Angeles by auction houses - including the well-known British firms Bonhams and Christie's - that are now confirmed to be missing from AGN, officials at the Mexico City-based archive said. They said some of those documents, once bound in weather-beaten books, had been surgically removed as if with a scalpel.

"It's scandalous," said one of the gumshoes, María Isabel Grañén Porrúa, a prominent Mexican cultural figure and a scholar of 16th-century Spanish colonial books. "We are very worried, not just by this theft, but also about all the other robberies and looting of national heritage."

Names of the buyers and sellers of the Cortés documents were never disclosed publicly by the auction houses. Such anonymity is commonplace in an industry whose well-heeled patrons prize secrecy.

Swann Galleries, which handled a half-dozen Cortés papers, denied wrongdoing. London-based Christie's, which put two out for bid, said it carefully vets the provenance of all items it puts up for auction. Bonhams, another London firm, auctioned one; it declined to comment. Los Angeles auction house Nate D. Sanders, which put one Cortés document on the block, did not respond to a request for comment.

The Cortés flap comes at a time of intensifying scrutiny of the global antiquities trade. Countries including Mexico are watching auction houses for potentially pilfered objects. Others are demanding repatriation of relics displayed in foreign museums.

The researchers' sleuthing has sparked law enforcement investigations in Mexico as well as in the United States by US Homeland Security Investigations (HSI), according to a report by Reuters.

The news organisation is also the first to reveal that Mexico's Foreign Ministry has enlisted the help of the US Department of Justice (DOJ) in repatriating the 10 missing manuscripts, according to Alejandro Celorio, the ministry's legal advisor.

"We are already in cooperation with the federal prosecutor in the New York district," Celorio said.

The Brazilian buyer of one of the allegedly purloined Cortés manuscripts handled by Swann Galleries had returned it to the auction house.

Manhattan-based Swan Galleries has emerged as a key player in the unfolding drama. It cancelled its scheduled Sept. 24 auction of the 1521 Cortés letter on September 9, one day after Reuters contacted the firm about the researchers' allegations.

Swann Galleries said it works diligently to ascertain the provenance of antiquities it auctions. It keeps extensive records and cooperates fully with law enforcement, said Alexandra Nelson, Swann Galleries' chief marketing officer. "Knowingly moving stolen material through an auction house is just about the silliest thing a person can do," Nelson said.

Also under scrutiny is the AGN, Latin America's largest archive. Mexican academics have long warned that the holdings of the cash-strapped institution are vulnerable to decay and theft.

"We are not ruling out any hypothesis," about how the Cortés papers were stolen, Marco Palafox, legal counsel for the AGN, told Reuters. "We are not discounting the possibility that the person responsible for the thefts of these documents was a manager, a worker or a researcher."

Key to the discovery of the alleged Cortés heists was a small group of Mexico-based academics. They included Grañén, the researcher of Spanish colonial books, and Michel Oudijk, a Dutch philologist at Mexico's National Autonomous University of Mexico. They also recruited María del Carmen Martínez, a renowned Cortés scholar at the University of Valladolid in Spain.

They said their suspicions were first aroused when a handful of Cortés-signed letters suddenly appeared at auctions in 2017 after three decades of no public sales.

The mini-boom began in April that year at Swann Galleries, which touted a 1538 letter from Cortés to his property manager as the first such document sold publicly since 1984. "Cortés letters are quite scarce on the market," the auction house said on its website.

The document fetched $32,500, according to the website. The name of the buyer was not published. But in 2018, the letter was displayed at The Morgan Library and Museum in New York. The institution said it did not own the letter and that it was part of an exhibition based on the private manuscript collection of Brazilian art historian Pedro Corrêa do Lago.

Reuters contacted Corrêa do Lago last month to inquire about the document.

"I have returned the letter, acquired in good faith, to Swann Galleries," Corrêa do Lago said in an e-mail. He declined further comment on what he termed a "very rare and unfortunate occurrence".

Swann Galleries declined to comment on Corrêa do Lago's remarks.

Bonhams, Christie's and Nate D. Sanders also auctioned one Cortés document each in 2017, according to the academics and information on Bonhams and Christie's websites.

Christie's said it devotes "considerable resources to investigating the provenance and authenticity" of auctioned objects and it "does not comment concerning ongoing investigations."

The researchers said they alerted Mexican antiquities authorities in 2018 and 2019 about their suspicions as fresh Cortés manuscripts kept appearing at auction, including four in 2019. When two more surfaced in 2020, with still no action from the government, the academics launched their own investigation around mid-year.

One of the group contacted Martínez, the Spanish scholar, for help. Not only was Martínez a leading Cortés expert, she had taken thousands of photographs of AGN manuscripts documenting his colonial administration during two trips to Mexico City in 2010 and 2014.

The academics quickly compiled a list of nine documents that had been put up for auction since 2017. A tenth was to be sold by Swann Galleries on September 24, 2020: a 1521 missive to Cortés from some allies imploring him to avoid an emissary of the Spanish crown intent on stripping him of his powers.

It sounded familiar to Martínez. Poring over her photos, she found a match. The document shown on Swann Galleries' website was identical to one she had photographed at AGN years earlier - down to the penman's swooping cursive and a small triangle-shaped chunk of parchment missing from the left-hand margin.

In all, Martínez had photographed eight of the 10 manuscripts allegedly swiped from Mexico's national archive.

"We really shouldn't have situations like this in the 21st century," Martínez told Reuters.

The researchers went public with their concerns in early September. Swann Galleries cancelled its September 24 sale following inquiries from Reuters.

Palafox, the archive's legal counsel, said AGN didn't contact the US auction house to stop the sale because it could not quickly establish - beyond Martínez's photos - that the 1521 manuscript and others were, in fact, missing from its collection.

AGN houses hundreds of thousands of documents, but only about 40 per cent have been catalogued, Palafox said. "The other 60 per cent we don't know what's there," he said.

For help, the archive staff turned to microfilm images recorded at AGN in 1993 by the Genealogical Society of Utah, an arm of The Church of Jesus Christ of Latter-Day Saints. The non-profit, now known as FamilySearch, has photographed archives worldwide to assist Mormons and others in tracing their ancestry.

Within that microfilm, Palafox said, AGN staff found images of nine of the 10 manuscripts that had come up for auction; a written description was found of the 10th. From there, AGN employees pinpointed where those papers should have been housed in its stacks. All were missing, Palafox said, some cut cleanly from their colonial-era bindings.

In October, Palafox said he hosted a video call with US investigators. He displayed images of the Cortés documents from the websites of the auction houses alongside those of the 1993 microfilms and researcher Martínez's photos to show the similarities.

"This was enough to get their attention," Palafox said.

The State Department said it could not comment on specific cases, but said the government was committed to combating the theft and trafficking of cultural heritage.

Palafox said Mexican federal prosecutors have also launched a probe. The Mexican Attorney General's office did not respond to requests for comment.

Wittman, the ex-FBI agent, said US investigators would likely subpoena the auction houses to identify the sellers and consignors who handled transport of the documents. The strategy, he said, is to work down the chain until they reach the suspected thieves in Mexico.