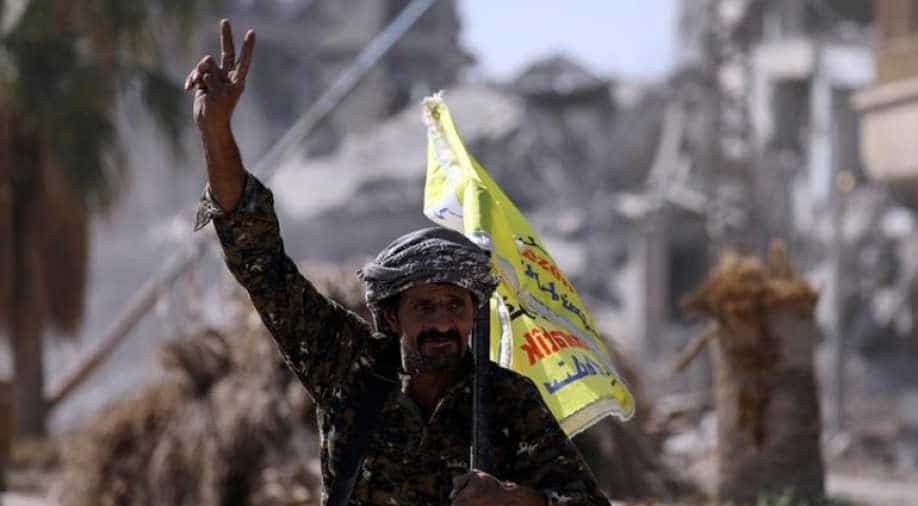 US-backed militias raised a flag inside Raqqa stadium on Tuesday, a Reuters witness said, as a four-month battle to take Islamic State's Syrian capital came to an end.

The fighting was over but the alliance of Kurdish and Arab militias was clearing the stadium of mines and any remaining hiding militants, said Rojda Felat, commander of the Raqqa campaign for the Syrian Democratic Forces (SDF).

A war monitor, the Syrian Observatory for Human Rights, said Islamic State was now completely cleared from the city.

The fall of Raqqa city, where Islamic State staged euphoric parades after its string of lightning victories in 2014, is a potent symbol of the jihadist movement's collapsing fortunes. From the city, the group planned attacks abroad.

The SDF, backed by a US-led international alliance, has been fighting Islamic State inside Raqqa since June.

Another Reuters witness said militia fighters celebrated in the streets, chanting slogans from their vehicles.

A group of militia fighters and commanders clasped their arms around each other, smiling, in a battle-scarred landscape of rubble and ruined buildings at a public square.

The flag in the stadium and others waved in the city streets bore the yellow background and red emblem of the Kurdish YPG, the strongest militia in the SDF.

"We do still know there are still IEDs and booby traps in and amongst the areas that ISIS once held, so the SDF will continue to clear deliberately through areas," said Colonel Ryan Dillon, a spokesman for the coalition.

In a sign that the four-month battle for Raqqa had been in its last stages, Dillon said there were no coalition airstrikes there on Monday.

Islamic State has lost swathes of territory in Syria and Iraq this year, including its most prized possession, Mosul, and in Syria, it has been forced back into a strip of the Euphrates valley and surrounding desert.

The SDF, an alliance of Kurdish and Arab militias, took the National Hospital in fierce fighting overnight and early on Tuesday, said spokesman Mostafa Bali in a statement.

"During these clashes, the National Hospital was liberated and cleared from the Daesh mercenaries, and 22 of these foreign mercenaries were killed there," said Bali, using the Arabic acronym for Islamic State.

An SDF field commander who gave his name as Ager Ozalp said three militiamen had been killed on Monday by mines that have become an Islamic State trademark in its urban battles.

Another field commander, who gave his name as Abjal al-Syriani, said SDF fighters had found burned weapons and documents in the stadium.

The stadium and hospital became the last major positions held by Islamic State after the departure of some of its fighters on Sunday, leaving only foreign jihadists to mount a last stand.

The SDF has been supported by a US-led international coalition with air strikes and special forces on the ground since it started the battle for Raqqa city in early June.

The final SDF assault began on Sunday after a group of Syrian jihadists quit the city under a deal with tribal elders, leaving only a hardcore of up to 300 fighters to defend the last positions.

Raqqa was the first big city Islamic State captured in early 2014 before its rapid series of victories in Iraq and Syria brought millions of people under the rule of its self-declared caliphate, which passed laws and issued passports and money.

It used the city as a planning and operations centre for its warfare in the Middle East and its string of attacks overseas, and for a time imprisoned Western hostages there before killing them in slickly produced films distributed online.

The SDF advance since Sunday also brought it control over a central city roundabout, where Islamic State once displayed the severed heads of its enemies, and which became one of its last lines of defence as the battle progressed.