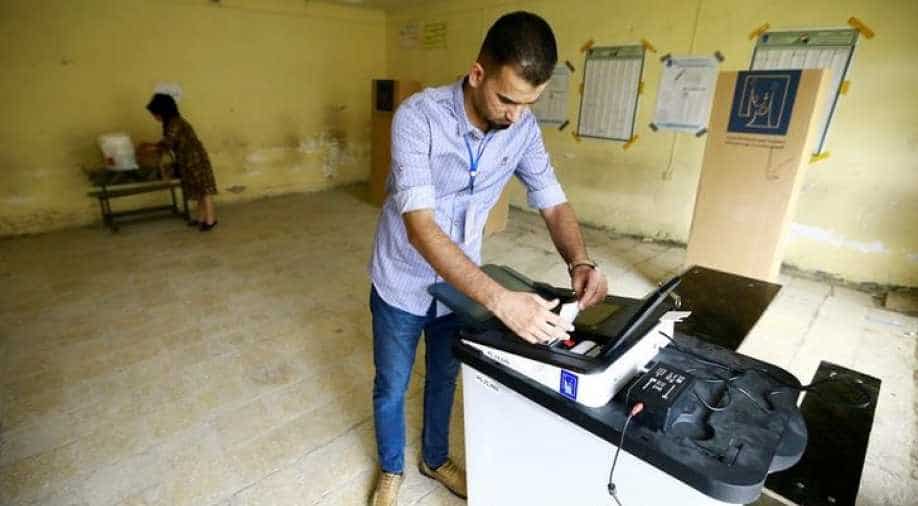 Iraqis began voting in the first parliamentary election on Saturday since defeating Islamic State, but few people expect its new leaders to deliver the stability and economic prosperity that have long been promised.

The oil producer has struggled to find a formula for stability since a U.S.-led invasion toppled dictator Saddam Hussein in 2003, and many Iraqis have lost faith in their politicians.

Whoever the new parliament chooses as prime minister will face an array of challenges after a three-year war against Islamic State which cost the country about $100 billion.

Much of the northern city of Mosul was reduced to rubble in fighting to oust Islamic State, and it will require billions of dollars to rebuild. The economy is stagnant.

Sectarian tensions, which erupted into civil war in 2006-2007, are still a major security threat. AndIraq's two main backers, Washington and Tehran, are at loggerheads.

The three main ethnic and religious groups -- the majority Shi'ite Arabs and the Sunni Arabs and Kurds -- have been at odds for decades, and the sectarian divisions remain as deep as ever.

"I will participate but I will mark an 'X' on my ballot. There is no security, no jobs, no services. Candidates are just looking to line up their pockets, not to help people," said Jamal Mowasawi, a 61-year-old butcher.

U.S. President Donald Trump's decision to withdraw from the nuclear deal will prompt Iran to maintain its vast political and military influence in Iraq, the most important Arab state for Tehran.

Abadi is considered by analysts to be marginally ahead, but victory is far from certain for the man who raised hopes that he could forge unity when he came to office.

But while he reached out to minority Sunnis he alienated Kurds after crushing their bid for independence.

He improved his standing with the victory against Islamic State, which had occupied a third of Iraq.

But Abadi lacks charisma and has failed to improve the economy and tackle corruption. He also cannot rely solely on votes from his community as the Shi'ite voter base is unusually split this year. Instead, he is looking to draw support from other groups.

Even if Abadi's Victory Alliance list wins the most seats, he still has to negotiate the formation of a coalition government, which must be concluded within 90 days of the election.

"It's the same faces and same programmes. Abadi is the best of the worst; at least under his rule we had the liberation (from Islamic State)," said Hazem al-Hassan, 50-year-old fishmonger in Baghdad.

Amiri spent more than two decades fighting Saddam from exile in Iran. The 63-year-old leads the Badr Organisation, which was the backbone of the volunteer forces that fought Islamic State.

He hopes to capitalise on his battlefield successes. Victory for Amiri would be a win for Iran, which is locked in proxy wars for influence across the Middle East.

But many Iraqis are disillusioned with war heroes and politicians who have failed to restore state institutions and provide badly needed health and education services.

"There is no trust between the people and the governing class," said Hussein Fadel, a 42-year-old supermarket cashier in the capital. "All sides are terrible. I will not vote."

Critics say Maliki's sectarian policies created an atmosphere that enabled Islamic State to gain sympathy among some Sunnis as it swept across Iraq in 2014.

Maliki has sidelined soon afterwards, having been in office for eight years, but he is now trying to make a comeback.

In contrast to Abadi, with his cross-sectarian message, Maliki is again posing as Iraq's Shi'ite champion and has proposed doing away with the unofficial power-sharing model under which all main parties have cabinet representatives.

Iraq's Sunni minority had dominated key positions in government during Saddam's brutal rule, whereas majority Shi'ites have held sway since a U.S-led invasion toppled the dictator in 2003.

Maliki, who pushed for U.S. troop withdrawals, and Amiri, who speaks fluent Farsi and spent years in exile in Iran during Saddam's time, are both seen as much closer to Tehran than Abadi.

The post of prime minister has been reserved for a Shi'ite, the speaker is a Sunni, and the ceremonial presidency has gone to a Kurd - all three chosen by parliament.

More than 7,000 candidates in 18 provinces, or governorates, are running this year for 329 parliamentary seats.

In Kirkuk, the main oil city disputed by Iraq's Kurds and the Baghdad government, 90-year-old Najm al-Azzawi has witnessed Iraq's upheaval over many years: Saddam Hussein's military adventures and the crippling international sanctions that followed, the U.S. occupation, sectarian bloodshed and Islamic State's reign of terror.

But he has not lost hope.

"God save Iraqis from the darkness they have been in," he said. "It is the most joyful thing to vote."