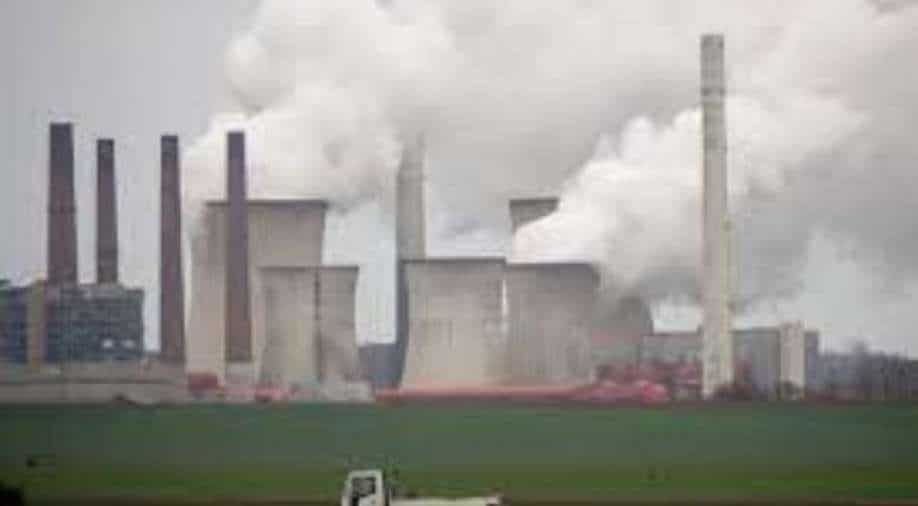 A truck drives by as steam rises from the five brown coal-fired power units of RWE, one of Europe's biggest electricity companies in Neurath, north-west of Cologne, Germany (file photo) Photograph:( Reuters )

At the current rate of increase in greenhouse gas concentrations, we will see a temperature increase by the end of this century far in excess of the Paris Agreement targets of 1.5 to two degrees Celsius above pre-industrial levels

Greenhouse gas concentrations in the atmosphere reached new record levels last year, the United Nations said Monday in a stark warning ahead of the COP26 summit about worsening global warming.

The Greenhouse Gas Bulletin from the UN's World Meteorological Organization said the annual rate of increase last year was above the yearly average between 2011 and 2020 and the trend continued in 2021.

The WMO said the economic slowdown caused by the Covid-19 pandemic triggered a temporary decline in new emissions, but had no discernible impact on the atmospheric levels of greenhouse gases and their growth rates.

The organisation said that as long as emissions continue, global temperatures will continue to rise.

And given the long life of carbon dioxide (CO2), the temperature level already observed will persist for several decades even if emissions are rapidly reduced to net zero.

COP26, the UN Climate Change Conference, is being held in Glasgow from October 31 to November 12.

"At the current rate of increase in greenhouse gas concentrations, we will see a temperature increase by the end of this century far in excess of the Paris Agreement targets of 1.5 to two degrees Celsius above pre-industrial levels.

The three major greenhouses gases are CO2, methane and nitrous oxide. CO2 is the most important, accounting for around 66 percent of the warming effect on the climate.

The report said that roughly half of the CO2 emitted by human activity remains in the atmosphere, with the other half ending up in the oceans and the land.

"The last time the Earth experienced a comparable concentration of CO2 was 3-5 million years ago, when the temperature was 2-3C warmer and sea level was 10-20 metres higher than now. But there weren't 7.8 billion people then," said Taalas.

Methane averages reached a new high of 1,889 parts per billion in 2020, up 11ppb on the year before, and is at 262 percent of the pre-industrial benchmark.

Around 40 percent of methane is emitted from natural sources such as wetlands, while 60 percent comes from human activity, including rice agriculture and landfills.

'No time to lose'

That includes intense heat and rainfall, ice melt, sea-level rise and ocean acidification -- all of which will have far-reaching socio-economic impacts.

"We need to transform our commitment into action that will have an impact on the gases that drive climate change," said Taalas.

"We need to revisit our industrial, energy and transport systems and whole way of life. The needed changes are economically affordable and technically possible. There is no time to lose."

Euan Nisbet, from the University of London's Greenhouse Gas Group, compared greenhouse gas measurements to "skidding into a car crash".

"The disaster gets closer and closer but you can't stop it. You can clearly see the crash ahead, and all you can do is howl."