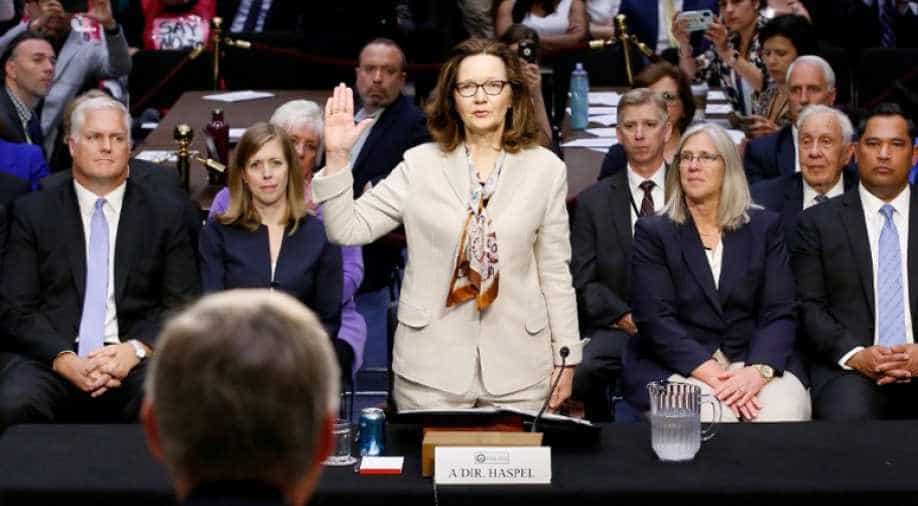 Gina Haspel is sworn-in before testifying to the Senate Intelligence Committee on her nomination to be the next CIA director in the Hart Senate Office Building on Capitol Hill in Washington. Photograph:( AFP )

Haspel had allegedly played a role in "waterboarding" al Qaida terrorists in CIA prison in Thailand in 2002.

US Senate Intelligence Committee today cleared the way for Gina Haspel to takeover the reins of the Central intelligence Agency(CIA).

The committee voted 10-5 in Haspel's favour ensuring her nomination which was backed by President Trump to go through despite her record of alleged involvement in the torture of al-Qaida operatives in early 2000.

"Gina Haspel is the most qualified person the president could choose to lead the CIA and the most prepared nominee in the 70-year history of the agency," Richard Burr committee chairman said.

In a written statement which was eventually cleared by the White House, Haspel had told the committee earlier that the premier spy agency wouldn't engage in any torture of detainees if she is made CIA chief.

"Having served in that tumultuous time, I can offer you my personal commitment, clearly and without reservation, that under my leadership CIA will not restart such a detention and interrogation program," she had told the Senate Intelligence Committee.

Haspel had allegedly played a role in "waterboarding" al Qaida terrorists in CIA prison in Thailand in 2002.

"She has acted morally, ethically, and legally, over a distinguished 30-year career and is the right person to lead the agency into an uncertain and challenging future."

During the hearing, Haspel had said her "moral compass" was strong and she wouldn't allow the CIA to undertake any activity that was "immoral".

"America is looked at all over the world as an example to everyone else in the world, and we have to uphold that. And CIA is included in that," she told the committee, adding,"I support the law. I would not support a change in the law."