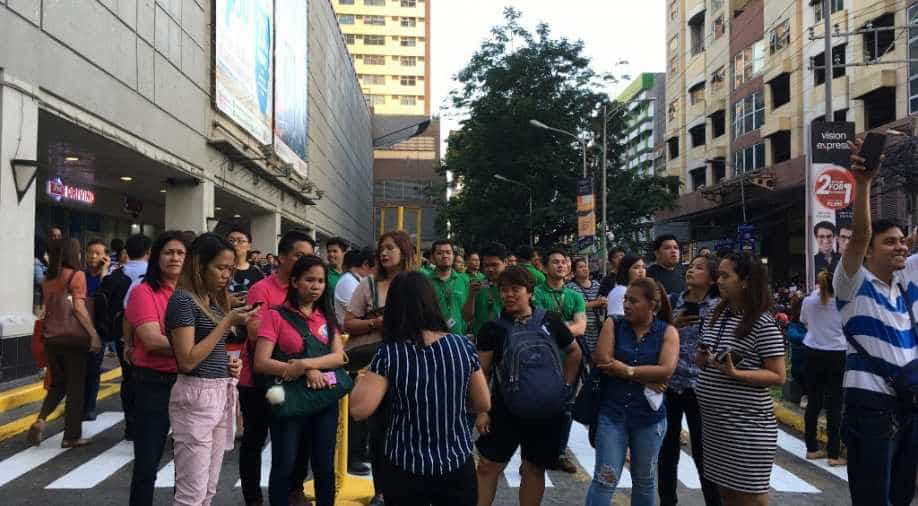 A strong quake with a magnitude of 6.3 struck the region at 5:11 pm (0911 GMT) according to the US Geological Survey.

Five people were killed when at least two buildings collapsed near Manila after a powerful earthquake set skyscrapers swaying and drove terrified locals into the street.

Three bodies have been pulled out of a four-storey building in the town of Porac, while a woman and her grandchild were crushed to death in the town of Lubao, Lilia Pineda, governor of Pampanga province told ABS-CBN television.

"We believe there are still people trapped in the four-storey building," Pineda said, adding 20 people have so far been rescued and taken to hospital as night fell.

"It's difficult because there is no power, so we're still trying to get hold of a generator to be able to rescue the people inside," she added.

A strong quake with a magnitude of 6.3 struck the region at 5:11 pm (0911 GMT) according to the US Geological Survey.

The quake that rumbled across the northern Philippines caused skyscrapers to sway, as they are designed to do, in Manila.

It also caused serious damage to the capital's secondary Clark Airport, which is located on the site of the former US military installation that lies about an hour's drive north of the capital.

The damage was still being assessed, but residents posted photos on social of media showing cracked walls and light fixtures swinging in the moments after the quake.

Feliza Villanueva, 21, a business process outsourcing employee told AFP she and four colleagues were at work when the quake struck.

"This was the second strongest quake I've felt in my entire life," she told AFP as she joined hundreds of others in the courtyard of an office building, waiting for the all clear.

"We were worried but we did not panic," she said.

"We planned how to evacuate the building. There were too many people going down the stairs, so we waited for our turn. People looked in shock, but no one was shouting or anything like that," she said.

The quake was centred on the town of Castillejos, about 100 kilometres (62 miles) northwest of Manila, local geologists said.

Scientists from the US Geological Survey logged its magnitude at 6.3, and said its epicentre was 40 kilometres (25 miles) below the Earth's surface.

Dani Justo, a martial arts instructor, told AFP she was at her Manila home when the quake struck.

"The clothes hanging on our line were really swaying. My shih tzu (dog) dropped flat on the ground," she added.

The Philippines is part of the Pacific "Ring of Fire", an arc of intense seismic activity that stretches from quake-prone Japan through Southeast Asia and across the Pacific basin.