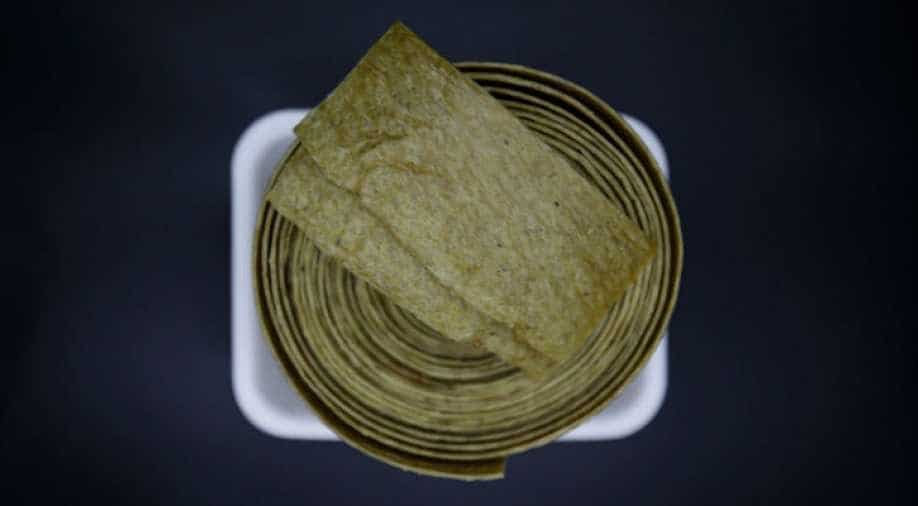 'Take the dregs left from making soy bean oil, which usually go to feed the pigs. Press and roll them into a sandy-coloured paste. Stuff with rice, and top with chilli sauce.' The dish's name, injogogi, means "man-made meat."

In North Korea for years it was a recipe for survival. Today it is a popular street food, traded alongside other goods and services on informal markets, known as jangmadang. Defectors say there are hundreds of these markets. The creation and informal trade of injogogi and other foods offers a window into a barter economy that has kept North Korea afloat despite years of isolation, abuse, and sanctions.

"Back in the day, people had injogogi to fill themselves up as a substitute for meat," said Cho Ui-sung, a North Korean who defected to the South in 2014. "Now people eat it for its taste."

North Korea was set up with backing from the Soviet Union as a socialist state. The Soviet collapse in 1991 crippled the North Korean economy and brought down its centralised food distribution system. As many as three million people died. Those who survived were forced to forage, barter and invent meals from whatever they found. Since people started to use their own initiative, studies indicate, person-to-person dealings have become the way millions of North Koreans procure basic necessities such as food and clothing.

Pyongyang has said the curbs threaten the survival of its children. Defectors say a poor corn harvest this year has made it hard for people in rural areas to feed themselves. The agencies who want to help find all this hard to measure.

Pyongyang says 70 per cent of North Koreans still use the state's central distribution system as their main source of food, the same number of people that the UN estimates are "food insecure." The system consistently provides lower food rations than the government's daily target, according to UN food agency the World Food Programme (WFP). The UN uses this information to call on member states to provide food aid for North Korea - $76 million for "nutrition support" alone at its last request of which it has received $42 million.

But surveys and anecdotal evidence from defectors suggest private markets are the main source of supply for most North Koreans.

"It becomes sort of ridiculous to analyse food distribution in North Korea by focusing on an archaic system that's lost so much of its significance over the past couple of decades," said Benjamin Silberstein, an associate scholar at the Foreign Policy Research Institute who researches the North Korean economy.

The WFP and the UN's other main food aid agency, the Food and Agricultural Organisation, said the UN relies on all available information and inputs, including official statistics. The agencies have a permanent office in Pyongyang and make regular visits to Public Distribution Centres, farms and occasionally markets in North Korea.

"We recognise that the data and their sources are limited but it's the best we have available at present," said the UN agencies in a joint statement, referring to the official North Korean government data.

The agencies said they have seen no sign that more food than needed is delivered to North Koreans. "The main issue is a monotonous diet – mainly rice/maize, kimchi and bean paste – lacking in essential fats and protein," the statement said.

The North Korean diplomatic mission in Geneva did not respond to questions about how international sanctions might be harming food availability and whether U.N. aid agencies had access to markets in North Korea to assess the products on offer.

Last year, North Korea's economy grew by 3.9 percent - its fastest in 17 years and faster than many developed economies, according to South Korea's central bank. It was helped largely by mining, market reforms, and dealings with China, its neighbour and now the world's largest economy. Reporters saw signs of chronic hunger in North Korea as recently as 2013, but people who have defected say the food supply has improved in recent years.

Eight defectors told Reuters they ate much the same thing as people in the South. Asked about the contents of their food cupboards, most said they were stocked with privately grown vegetables, locally made snacks, and rice, or if they were poor, corn, which is a cheaper staple.

Younger and wealthier defectors say they had plenty of meat, although it was often seasonal because electric power is too erratic to power fridges. Pork is common, but defectors also talked of eating dog meat, rabbit, and badger.

Even so, on average North Koreans are less well nourished than their Southern neighbours. The WFP says around one in four children have grown less tall than their South Korean counterparts. A study from 2009 said pre-school children in the North were up to 13 cm (5 inches) shorter and up to 7 kg (15 pounds) lighter than those brought up in the South.

The North's Public Distribution System (PDS) stipulates that 70 percent of people receive ration coupons to spend at state distribution shops. The other 30 percent are farmers who are not eligible for rations because they grow their own vegetables in private plots. According to the WFP, the PDS had been reinstated by 2006.

Some markets, known as "grasshopper markets" for the speed with which traders set up and take down the stalls, are still illegal. But there are also officially sanctioned markets, where traders are free to buy and sell provided they pay stall fees to the state.

Inventions like injogogi are among foods traded on these stalls. It is low in calories but rich in protein and fibre, to help muscle growth and keep hunger at bay, said Lee Ae-ran, a chef from the North Korean town of Hyesan who took a doctorate in nutrition in Seoul. "Because it contains so much protein, it's also very chewy," Lee said.

The sauce can be delicious, said Cho. "People who lived by the sea put shredded anchovies in the sauce; people living in the countryside used spicy peppers. I lived close by shore so I used shredded sand eels."

The jangmadang are remotely monitored by a website called Daily NK, a Seoul-based operation staffed by North Korean defector journalists. It said in a report released this August that there are 387 officially sanctioned markets in the country, encompassing more than half a million stalls. Over 5 million people are either "directly or indirectly" reliant on the markets, "solidifying their place in North Korean society as an integral and irreversible means of survival," the report said.

In 2015, a survey of 1,017 defectors by Seoul University professor Byung-yeon Kim found that official channels such as the PDS accounted for just 23.5 percent of people's food intake. Around 61 percent of respondents said private markets were their most important source of food, and the remaining 15.5 percent came from self-cultivated crops.

So the official system may mean little to many North Koreans.

"WFP has consistently been asking (the North Korean government) to carry out a more detailed study on market activity and the role of markets in achieving household food security," a spokeswoman said.

As in other countries, North Korea's wealthy have choice. Residents of the capital can order up a pizza in one of Pyongyang's hundreds of restaurants, say regular visitors. Many of the eateries are operated by state-owned enterprises. Some used to cater only to tourists. Increasingly they now also collect dollars and euros from locals.

At a place people know as the "Italian on Kwangbok Street," for example, moneyed locals and western tourists alike can pick vongole pasta for $3.50, or pepperoni pizzas for $10, the menu says. This compares with $0.30 for a kilo of corn or $0.50 for a portion of injogogi in the markets.

Reuters was unable to determine how the restaurant sources its ingredients such as pepperoni, although North Korea imports processed meats and cheeses from European countries and Southeast Asia - such imports are legal. Calls to the phone numbers on the menu failed and an operator for the Pyongyang switchboard said the numbers could not be connected to international lines.

As the economy in North Korea has changed, so have the tastes of a moneyed middle class keen to try new foods. Kim Jong Un has called for more domestically produced goods, according to state media, and there are more locally made sweets, snacks and candies. The country does not publish detailed import data but China's exports of sugar to North Korea in January to September this year ballooned to 44,725 tonnes, Chinese data shows. That is about half of all China's global sugar exports and compares with 1,236 tonnes in 2016 and 2,843 in 2015.

North Korea does not produce sugar. According to the International Sugar Organization, the North's sugar consumption is fairly steady at around 89,000-90,000 tonnes a year – a very modest amount per head. Each South Korean consumes about nine times more than that.

At the other end of the social scale, Chinese data shows corn exports to North Korea also jumped in the first nine months of this year, to nearly 50,000 tonnes, compared with just over 3,000 tonnes in the whole of 2016.

Daily NK reporters say they call secret sources in North Korea several times a week to get the market price of rice, corn, pork, fuels and the won currency - which is traded at around 8,100 to the dollar, as opposed to the official rate of around 100 to the dollar.

So far, their reports suggest, petrol and diesel prices have doubled since the most recent round of UN Security Council resolutions. The market price of rice and corn has increased less sharply. Reuters was not able to independently confirm their reports.

And there are other ways North Koreans can supplement their diets.

"My dad often received bribes," said one 28-year-old defector who asked to be identified only by her surname, Kang, because when she moved out in late 2010 she left her father behind.

He was a high-ranking public official. The bribes he received included goat meat, dog meat, and deer meat, she said.