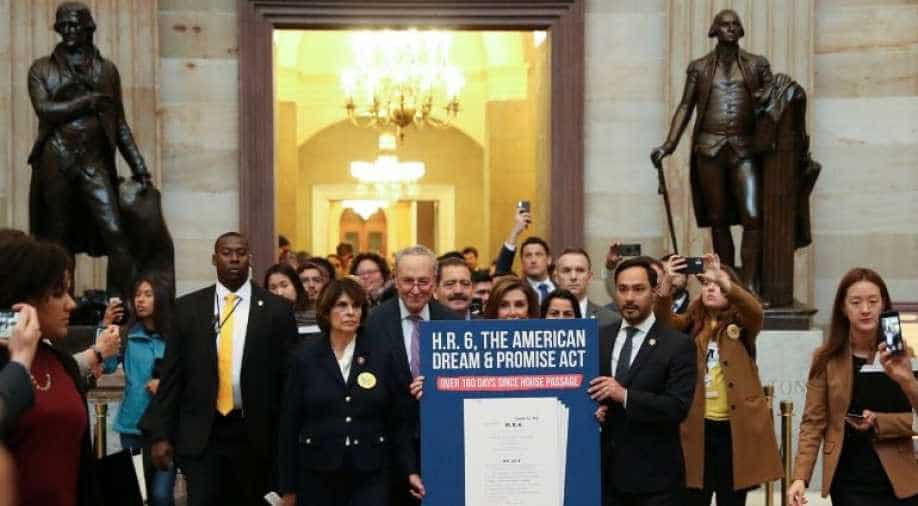 US House Speaker Nancy Pelosi and Senate Minority Leader Chuck Schumer lead a symbolic march to deliver the Dream Act, addressing young immigrants who were brought to the US as children, to Senate Majority Leader Mitch McConnell’s office at the US Capitol in Washington, US, November 12, 2019 Photograph:( Reuters )

Hundreds of demonstrators gathered outside the courthouse to show their support for the 'Dreamers', immigrants who were brought to the United States illegally or overstayed a visa as children.

Immigrants known as "Dreamers" and senior Democrats rallied behind the Obama-era Deferred Action for Childhood Arrivals programme on Tuesday as the US Supreme Court considered whether to let President Donald Trump end it.

Hundreds of demonstrators gathered outside the courthouse on a grey and chilly morning to show their support for the "Dreamers," immigrants who were brought to the United States illegally or overstayed a visa as children.

DACA, launched in 2012 by Democratic former President Barack Obama, provides roughly 661,000 such immigrants with deportation protection and work permits. Trump, a Republican known for his hardline immigration policies, announced plans in September 2017 to phase out DACA, but was blocked by lower courts.

Demonstrator Anel Medina, a 28-year-old DACA enrollee and oncology nurse at Penn Medicine in the Philadelphia area, said the programme changed her life. She was born in Mexico City, and her mother brought her to the United States at age 5. She was a college student and living without legal status when DACA was created in 2012.

"I was able to get a job ... finish nursing school," she said. "It was the moment I was waiting for."

Democratic congressional leaders criticized Trump and Republicans for failing to pass legislation to protect "Dreamers." The Democratic-led House passed a bill in June that would give legal status to an estimated 2.7 million people, but the Republican-controlled Senate has not taken up the measure.

"The president's relentless scapegoating of immigrants is the most un-American thing I can think of," Chuck Schumer, the top Senate Democrat, said during a news conference with roughly two dozen DACA recipients in the US Capitol.

Trump tweeted in the morning that he would strike a deal with Democrats to allow DACA recipients to stay if the Supreme Court rules against the programme, but also said many programme enrollees are "very tough, hardened criminals." The DACA programme bars applicants with serious criminal convictions.

Demonstrators at the protest outside the courthouse carried signs that read "home is here" and "defend DACA." Several hoisted depictions of monarch butterflies, which migrate from parts of the United States to Mexico and have become a symbol of the "Dreamers" movement.

No DACA opponents were evident outside the Supreme Court, but Dan Stein, president of the Federation for American Immigration Reform, which favours lower levels of immigration, argued that Trump's termination was lawful.

"President Obama's initial action was undertaken informally, and so the policy can be undone in precisely the same manner," Stein said in a statement.

Arisaid Gonzalez Porras and her brother Sergio, both DACA recipients and undergraduate students at Georgetown University, said the court should affirm the programme's legality, but that a permanent fix is needed.

"When the programme was rescinded it made a lot of us realise that DACA is just a Band Aid," she said.

Sammie Chai, a 19-year-old freshman at American University whose parents came to the United States from Malaysia, said she attended the demonstration in solidarity with "Dreamers" and other immigrants in the face of Trump's hardline policies.

"He exemplifies xenophobia," she said of Trump. "Everyone showing up here today, we're just showing that we will not stand for that."