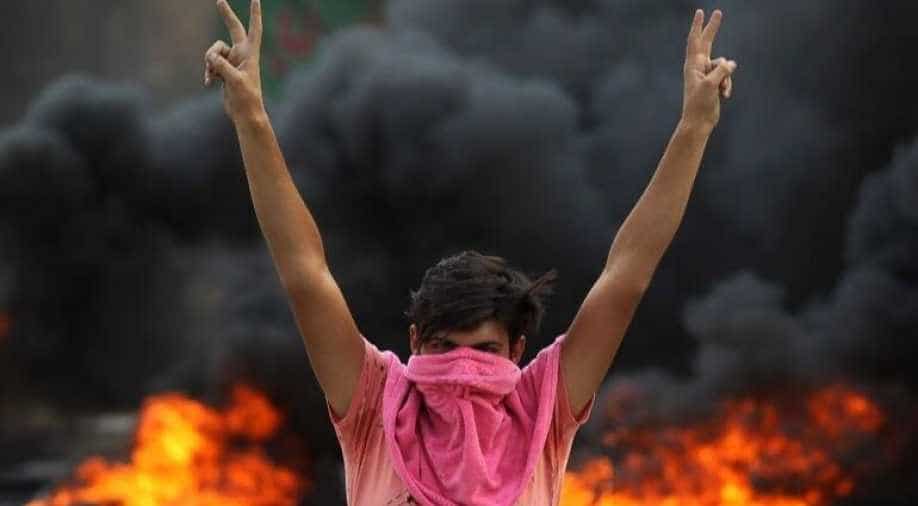 An Iraqi protester flashes the v-sign during a demonstration against state corruption, failing public services and unemployment in the Baladiyat district of the capital Baghdad Photograph:(AFP)
Follow Us

Iraqi premier Adel Abdel Mahdi ordered the ban on movements across Baghdad to stem the popular demonstrations over widespread unemployment and state corruption.

An indefinite curfew came into effect early Thursday in Iraq's capital after two days of chaotic protests across the country that descended into violence and left nine dead.

Iraqi premier Adel Abdel Mahdi ordered the ban on movements across Baghdad starting at 5:00 am local time to stem the popular demonstrations over widespread unemployment and state corruption.

Early Thursday, some cars and civilians were seen in the capital's streets, an AFP photographer said, but residents are wary that more protests could erupt after firebrand cleric Moqtada al-Sadr called for "a general strike".

The tension has been exacerbated by a near-total internet shutdown, the closure of government offices and at least one overnight explosion that hit the Green Zone, where some ministries and embassies are located.

A security source inside the area told AFP there were two blasts, likely caused by indirect fire a little over a week after two rockets hit near the US embassy there.

Since erupting in Baghdad on Tuesday, the protests have spread to other cities in the country's south.

Riot police in the capital have used water cannons, tear gas, rubber bullets and live rounds in an attempt to disperse protesters from the central Tahrir Square and other areas.

Into the night on Wednesday, marches from different parts of Baghdad attempted to converge on Tahrir.

But with internet access virtually shut, demonstrators have struggled to communicate with each other or post footage of the latest clashes.

In the holy city of Najaf and in Nasiriyah further to the south on Wednesday, security forces fired on protesters and curfews were also declared.

Nine people including a police officer have so far been killed, most of them in Nasiriyah and more than 400 people have been wounded, according to health authorities.

The protests appear to be largely spontaneous so far, with angry crowds carrying Iraqi flags and shunning any involvement by the country's main political players.

Many traditional figures have expressed their support for the movement, with Sadr urging "peaceful demonstrations."

He was behind the last round of major protests in Baghdad in 2016 when his supporters stormed the Green Zone, but his involvement appears much more limited this time.

On Wednesday night, the top United Nations official in Iraq Jeanine Hennis-Plasschaert met with some protesters in Baghdad to call for "direct dialogue" between them and government officials.

"The ability to preserve the right to protest is a sign of political and democratic maturity. Moreover, the use of force only fuels the anger," she said in a statement.

The violence drew a slew of criticism from Iraqi leaders including President Barham Saleh, and parliament has demanded an investigation into the incidents.

But anger over staggering rates of youth unemployment, which is around 25 per cent or double the adult rate according to the World Bank, appears to have set off this particular round of demonstrations.

"We want jobs and better public services. We've been demanding them for years and the government has never responded," said Abdallah Walid, a 27-year-old protester.

He called for the curfew after convening his national security council for an emergency meeting on Wednesday.

Abdel Mahdi has also blamed the violence on "aggressors who deliberately created casualties," a statement met with rage by protesters.