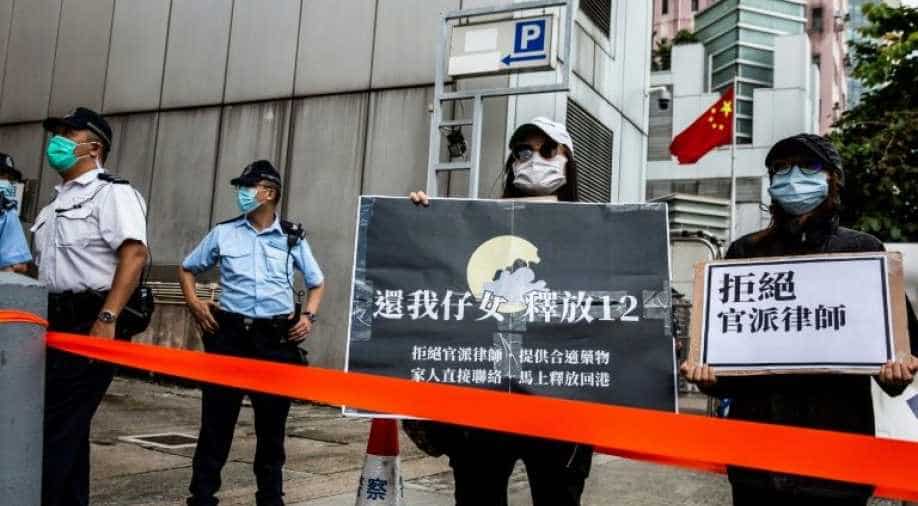 The group was snared some 70 kilometres (43 miles) southeast of the city on August 23 while trying to escape by boat, authorities said at the time, adding that they were handed to police in Shenzhen, the mainland metropolis bordering Hong Kong.

The group was snared some 70 kilometres (43 miles) southeast of the city on August 23 while trying to escape by boat, authorities said at the time, adding that they were handed to police in Shenzhen, the mainland metropolis bordering Hong Kong.

They had since disappeared into China's opaque judicial system, with lawyers struggling to access them and family members expressing fear over their fate.

On Wednesday the People's Procuratorate of Yantian District in Shenzhen said it had approved the arrests.

Two of the detainees, referred to as Deng and Qiao respectively, were arrested on suspicion of helping the others escape Hong Kong.

These names were likely to refer to the Chinese surnames of detainees Tang Kai-yin and Quinn Moon.

The other 10 -- including suspects surnamed Li and Huang -- were arrested for making illegal border crossings.

The case remained under investigation, the statement said.

Some of those aboard the boat were facing prosecution in Hong Kong for activities linked to last year's huge and often violent pro-democracy protests.

Lu Siwei, one of the mainland lawyers working on the case, told AFP the period of detention for investigation could last up to seven months.

"Review of (the) detention's legality can be applied for any time," Lu added, but said that "for now it remains most important to seek a meeting with the 12 in custody".

At least 14 mainland lawyers hired by the detainees' families have been pressured by authorities to drop their clients, according to activists.

None of the lawyers have managed to see their clients in custody, while senior officials in Hong Kong said the 12 were assigned lawyers by mainland Chinese authorities.

Hong Kong has its own internationally respected common law legal system where detainees are promptly produced after their arrest and tried in open court, but the judicial system on the mainland is notoriously opaque and controlled by the Communist Party, such that conviction is all but guaranteed.

In June, Beijing imposed a new security law on Hong Kong, announcing it would have jurisdiction for some crimes and that mainland security agents could openly operate in the city.

The prospect of Hong Kongers getting entangled in China's judicial system was the spark that lit seven months of protests last year.

The movement began in response to a plan to allow extraditions to the mainland, and soon morphed into wider calls for democracy and greater police accountability.

As Beijing has cracked down on Hong Kong's democracy movement, democratic Taiwan has emerged as a sanctuary, quietly turning a blind eye to residents turning up without proper visas or paperwork.