Battle of Idlib basis for resolving terrorism in Syria: Assad 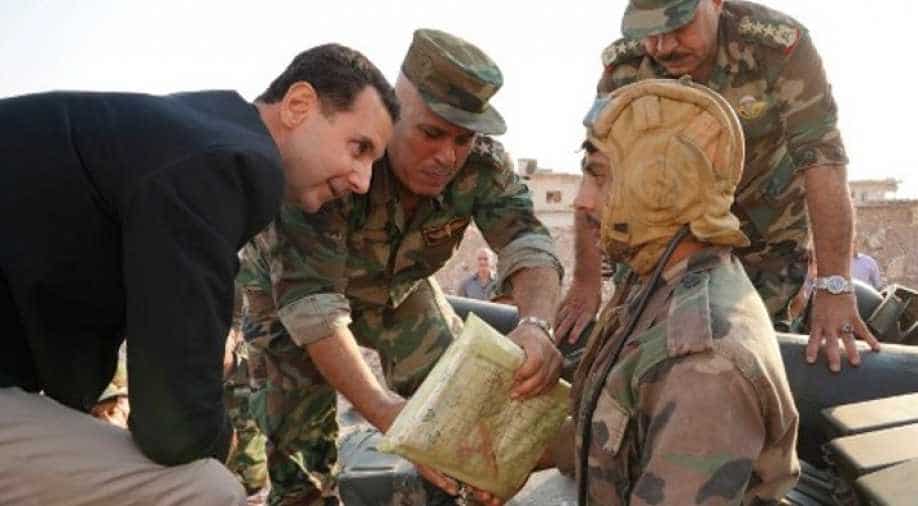 After turning the tide of the war, Assad's forces now control around 60 per cent of the country  and the president has repeatedly vowed to return all of it to his control.

Defeating jihadists in Idlib is the key to ending Syria's eight-year-old civil war, President Bashar al-Assad said on Tuesday on his first visit to the embattled northwestern region since 2011.

"The battle of Idlib is the basis for resolving chaos and terrorism in all other areas of Syria," Assad's office quoted him as telling troops in the frontline town of Al-Hbeit.

It published a picture of the president surrounded by troops dressed in military fatigues, with maps hanging behind them.

His comments came as Syrian troops continued to deploy in parts of the north where they are supporting Kurdish forces to contain a Turkish invasion, according to state news agency SANA.

After turning the tide of the war, Assad's forces now control around 60 per cent of the country  and the president has repeatedly vowed to return all of it to his control, including Idlib.

The Idlib region, which has some three million residents, half of them displaced from other parts of the country, is the last major rebel bastion in Syria.

Hayat Tahrir al-Sham -- a jihadist alliance led by Syria's former Al-Qaeda affiliate -- extended its administrative control over the whole of Idlib in January, but other rebel factions remain present.

In April, the Syrian government and its Russian allies launched an intensified bombardment of the region.

In August, government troops began a ground offensive that saw them retake several areas in southern Idlib, including the town of Al-Hbeit, which was among the first to fall.

An August 31 ceasefire brokered by Russia largely halted air strikes and clashes with heavy weapons, but skirmishes persist, according to the Britain-based Syrian Observatory for Human Rights.

While the Idlib front has been relatively calm, Syrian troops this month deployed in the northeast as part of a deal with Kurdish forces to protect them from a Turkish invasion.

The deployment is the army's most significant in the Kurdish-controlled north and northeast since it pulled back from the region from 2012.

The Syrian war has killed more than 370,000 people and displaced millions since it erupted in 2011 with the brutal repression of anti-government protests.