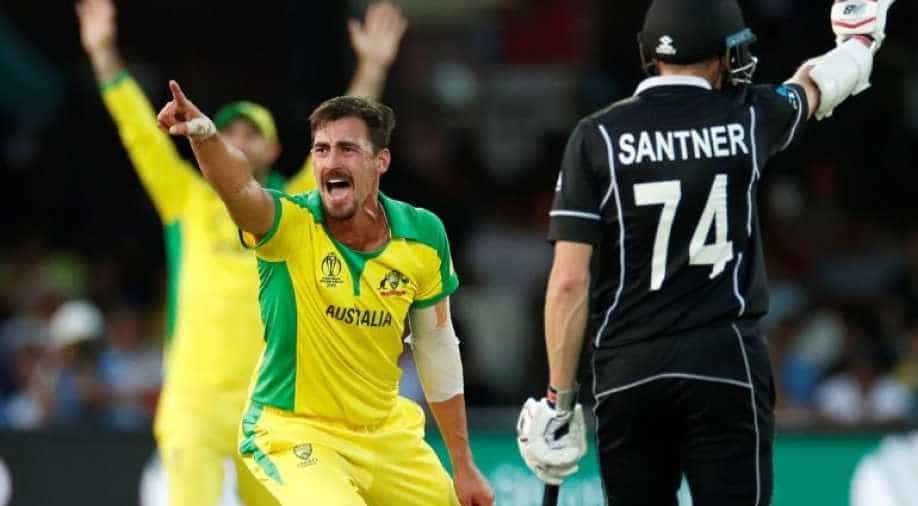 Trent Boult became the first New Zealand bowler to claim a hat-trick in the World Cup but it could not stop champions Australia still cruising to an 86-run victory in Saturday's rematch of the 2015 final between the trans-Tasman rivals at Lord's.

Boult dismissed Usman Khawaja, Mitchell Starc and Jason Behrendorff in successive deliveries but Australia, who had been reeling at 92-5 in the 22nd over, managed to post a competitive 243-9 after electing to bat.

It turned out that each of Boult's three hat-trick victims played significant part in Australia's victory.

Khawaja (88), who was dropped at slip before he could open his account, and Alex Carey (71) had combined to arrest their slide before Bolt (4-51) wrecked their lower order.

Behrendorff then dealt early blows before Starc spearheaded New Zealand's rout, claiming 5-26 as the Kiwis were shot out for 157 in the 44th over with not one of their players managing a half-century.

Australia, who had already secured a place in the semi-finals, remain on top with 14 points from eight matches, three points ahead of India who have played six.

Earlier, Aaron Finch's decision to bat first appeared to backfire as Boult dismissed the in-form Australia captain in the fifth over.

The champions lost four more wickets before reaching 100 but it could easily have been worse if Martin Guptill had not spilled Khawaja in the slips when the batsman was yet to open his account.

Carey and Khawaja then rebuilt the Australian innings with a sixth-wicket stand of 107, which Kane Williamson broke when he had Carey caught at cover.

Boult claimed the tournament's second hat-trick, after India's Mohammed Shami achieved the feat against Afghanistan, but Australia put enough on board for their bowlers.

The Australians bowled with lot of purpose and Behrendorff denied New Zealand a strong start, dismissing both the openers, Henry Nicholls and Guptill, cheaply.

Key batsman Williamson and Ross Taylor (30) tried to steady the innings but the wheels came off their innings after the Kiwi captain's attempt to play his trademark dab shot resulted in his dismissal for 40.

Starc then mowed down the New Zealand lower order to consolidate his position as the tournament's leading wicket-taker with 24 victims.