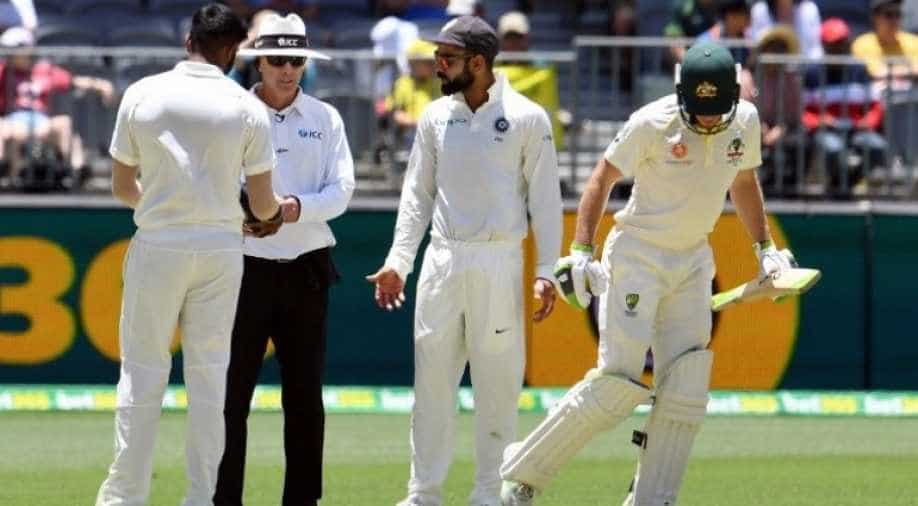 During the 71st over of the Australia innings bowled by Jasprit Bumrah, the respective captains were seen exchanging words after Kohli decided to field close to the non-striker.

The onfield verbal duel between rival captains Virat Kohli and Tim Paine has been one of the talking points of the second Test here but Australia pacer Josh Hazlewood Monday played it down, saying it was done in good spirits.

During the 71st over of the Australia innings bowled by Jasprit Bumrah, the respective captains were seen exchanging words after Kohli decided to field close to the non-striker and on-field umpire Chris Gaffaney warned both the players.

But, Hazlewood cautioned against reading too much in the exchange of words between Kohli and Paine.

"I think it was all good fun, it's quite competitive out there as you know and there's going to be words from time to time but it was all in good spirits," Hazlewood said.

"I don't think we read too much into it, we go about our work as we see fit and the Indians can do what they like. We control what we control and our behaviour is what we control. We'll worry about that and let everything else take care of itself."

It worked out well for Australia in the end as Kohli was dismissed for 17 in the second innings as India crashed to 55-4 in their chase. But, Hazlewood said Australia were not targeting a single batsman.

"No definitely not. I probably see (Cheteshwar) Pujara as the big wicket as far as when I'm bowling, the glue that holds them together I think. He's batted the most balls this series and scored nearly the most runs.

"I see Pujara as a big wicket and Ajinkya Rahane as well. So the nos. 3, 4, 5 as the key wickets and we see it a bit unstable in the other parts of the order. Certainly not all the focus is on Virat Kohli," he said.

Australia were on course for a series-levelling win after reducing India to 112-5 at stumps on day four, but Hazlewood said there were still some work to do for them for another home victory.

"I didn't go to the UAE, so it feels a bit of a long time between wins, but there's still a lot of work to do tomorrow. Anytime I'm playing in Australia we feel pretty confident, especially the bowlers feel very confident in getting 20 wickets and a result," he said.

"Last year, we got there four times out of five, so we are feeling pretty confident. It's just putting that into practice more often than not this summer," he added.

Usman Khawaja anchored the Australia innings by scoring 72 and adding 72 runs with Paine for the sixth wicket as Australia scored 243 runs in their second innings, despite Mohammed Shami taking 6/56.

"With Steve (Smith) and Dave (Warner) not here, a bit more pressure falls on Usman. I think he's the most capped batsman with Shaun Marsh. Experience counts a lot in these situations and there are quite a lot of young guys in top six. Usman felt that responsibility a bit more this season and he's been struggling the first couple of innings but to see him fight today made everyone a bit more relaxed," the pacer said.

"Tim Paine keeps things quite calm and composed and he doesn't get too flustered at any stages really and you could see that with the bat today, the way he batted and he was pretty unlucky to get that one today. In the field he leads very well, nice and calm."

Hazlewood said Paine was getting more confident as a leader, whether with the bat or in the field.

"He's quite an experienced player, and I think he's had time out of the game as well, so he knows himself quite well, not just as a cricketer but as a person. So off the field he's great to talk to about life, and the cricket side takes care of itself. He's been really great," he signed off.