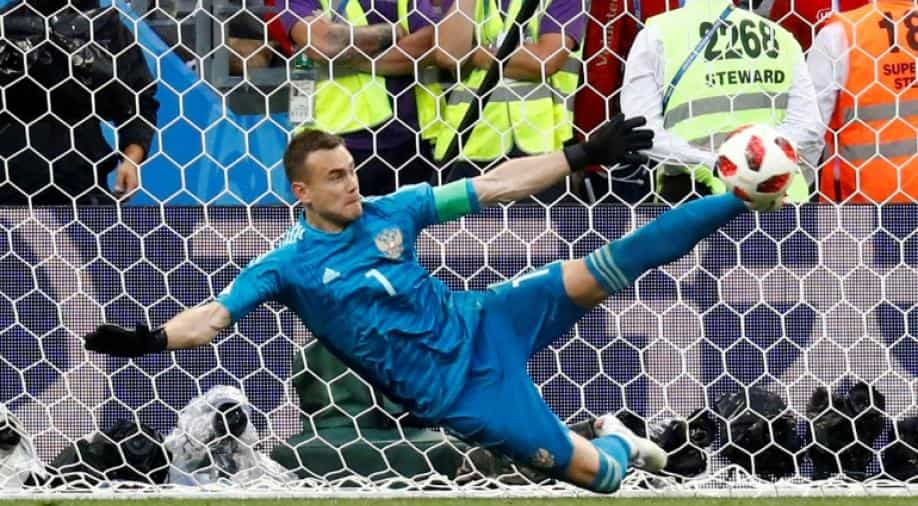 The highlight of Akinfeev's international career came at this year's World Cup hosted by Russia where he played a key role in helping his team reach the quarter-finals, where they lost 4-3 to Croatia in a penalty shootout.

Russia goalkeeper Igor Akinfeev is retiring from international soccer after leading the national side as captain to this year's World Cup quarter-finals on home soil.

The 32-year-old CSKA Moscow player's acrobatic penalty saves captivated home crowds and helped Russia to their best tournament finish since the collapse of the Soviet Union.

"There is a beginning and an end to every story," Akinfeev was quoted as saying on CSKA's website. "My story with the national team has also reached its logical end."

Akinfeev earned 112 caps for his country since his debut in 2004 as an 18-year-old, according to the Russian Football Union.

The highlight of his international career came at this year's World Cup hosted by Russia.

"It was a great honour for me to lead the Russian team as captain at the World Cup," he said. "Honestly I couldn't have dreamt of it. But it happened and probably was the peak of my career with the national team."

Akinfeev played a key role in helping his team reach the quarter-finals, where they lost 4-3 to Croatia in a penalty shootout.

He saved two penalties, including one with his left leg, to help Russia eliminate 2010 world champions Spain in the round of 16.

After the match, graffiti of the goalkeeper appeared around the country and his kick save became a symbol of Russia's unexpected success at the tournament.

"We didn't win any medals at the World Cup, but all the guys did what they could," he said. "The most important thing is that no one was indifferent among us."

CSKA manager Viktor Goncharenko said Akinfeev's decision would allow him to focus on his club who face Real Madrid in the Champions League in Moscow on Tuesday.

"As a simple fan, I regret that he can't help the national team," Goncharenko told reporters. "As CSKA coach I think this will benefit us because he will be completely concentrated on the club."

Russia had been heavily dependent on Akinfeev, who before the World Cup had had a checkered history in internationals.

At the 2014 World Cup, he fumbled the ball to gift South Korea a goal and a 1-1 draw, a mistake that contributed to Russia's group-stage exit from the tournament.

"I'm leaving with peace of mind," Akinfeev said. "A very good and promising generation has appeared in Russia. Some guys already revealed themselves to be real leaders at this World Cup."

'I want it to happen', Sabalenka on an all-Belarusian final at Australian Open