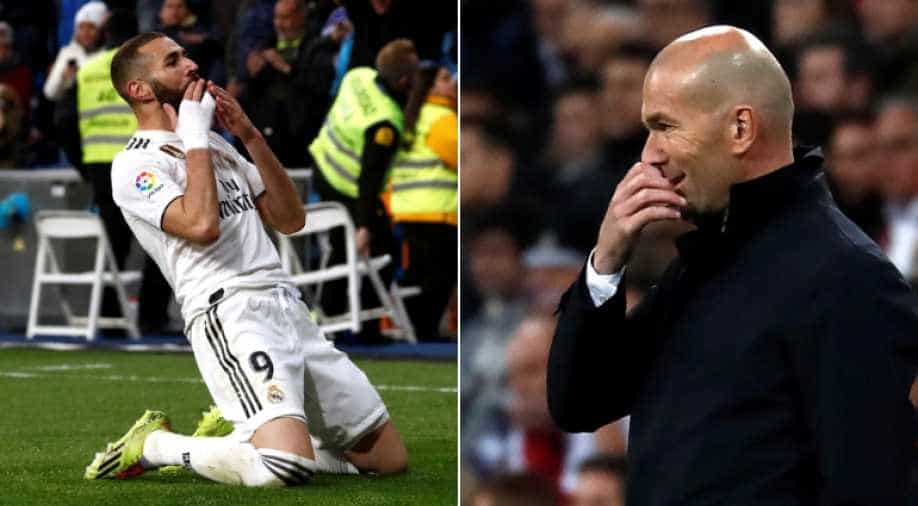 Benzema played a part in two goals before coming through with one of his own in the 89th minute against La Liga club Huesca.

Real Madrid boss Zinedine Zidane has said that he 'counts' with on Karim Benzema on staying at Bernabeu ahead the next season.

Karim Benzema played a part in two goals before coming through with one of his own in the 89th minute against La Liga club Huesca on Sunday and keep up coach Zinedine Zidane's perfect start since the Frenchman returned to the club.

The last-gasp win left Madrid third in the standings with 57 points after 29 games, while second-placed Atletico Madrid have 59 and runaway leaders Barcelona are on 69.

In the post-match presentation, Zidane praised Benzema, saying, "He is being our player in the last ten years. He is doing a good job. I think this is his best year and we are very happy with him."

He further added, "I am counting with him (for the next year). We still have nine games to play and for us, the most important is to end the season in the best possible way.

"We will see what happens next, but Karim (Benzema) is our player and I don't think that's going to change."

Huesca took a shock lead in the third minute of their first league visit to the Bernabeu when Cucho Hernandez smashed a cross from Ezequiel Avila past goalkeeper Luca Zidane, who was surprisingly brought into the team by his father.

"It was a crazy game but great for those who came to watch it," Zidane told reporters.

"We suffered a lot but you have to congratulate our opponents for how they played, they are bottom and they put in a great performance. They were causing us problems right until the end but we got a good result which we needed for our morale."

Zidane also praised Luka, saying, "I am very happy for him and for his debut here (at the Santiago Bernabeu), a game that we won. He is Luca (Zidane), the third goalkeeper."

"Thibaut (Courtois) was not as his best, and after the international break I wanted to give some rest to Keylor (Navas) and gave the opportunity to Luca. I think everything ended well," concluded Zidane.