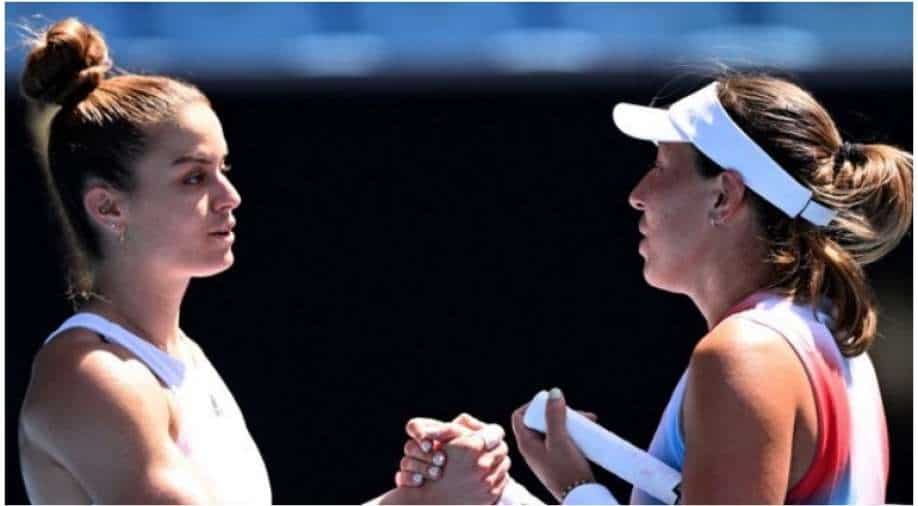 Under a blazing sun at Margaret Court Arena, Pegula`s stonewall defence left the hard-hitting Sakkari a hot mess and the American only grew in confidence as the match went on.

Jessica Pegula rekindled her love affair with Melbourne Park on Sunday by dumping Greek fifth seed Maria Sakkari out of the Australian Open 7-6(0) 6-3 to reach the quarter-finals for a second straight year.

Under a blazing sun at Margaret Court Arena, Pegula`s stonewall defence left the hard-hitting Sakkari a hot mess and the American only grew in confidence as the match went on.

Beaten by compatriot Jennifer Brady in last year`s quarters, 21st seed Pegula will have a chance to break new personal ground when she plays top seed Ash Barty or fellow American Amanda Anisimova in her next match.

With Madison Keys also reaching the last eight, the United States will again be well represented in the second week at Melbourne Park after having three quarter-finalists last year.

"I think we all root for each other," Pegula told reporters.
"It`s cool to see. You love to see Americans do well."

Having never reached the second week of another Grand Slam, Pegula has again found a spark on Melbourne`s blue hardcourts.
She stayed firm as the aggressive Sakkari broke back twice in the first set only for the Greek to crumble in the tiebreak, losing seven straight points.

From there Pegula went on the offensive, swinging hard at the Greek`s serve and was rewarded with an early break. Sakkari battled to save a match point as Pegula served out but sent a defensive backhand wide to concede the match.

Pegula, whose billionaire parents own Buffalo`s NFL and NHL franchises, will be able to watch the Bills` NFL divisional playoff against the Kansas City Chiefs during her rest day on Monday, due to the timezone.

"It`s nice that everyone is fired up about me winning and fired up about the game," she said. "It makes it really fun."
Greek trailblazer Sakkari rued a chance gone begging, having made the semi-finals of the French Open and U.S. Open last year in a breakout season.

She said she struggled in the heat and complained that the court was "dirty".
"There were strings on the back of the court. There were flies from last night. I think the dirt always makes the court
quicker," she said.
"I was actually surprised. Maybe they tried to clean it but they didn`t have the time."