Pakistan may soon have the world's third-largest nuclear stockpile: Report 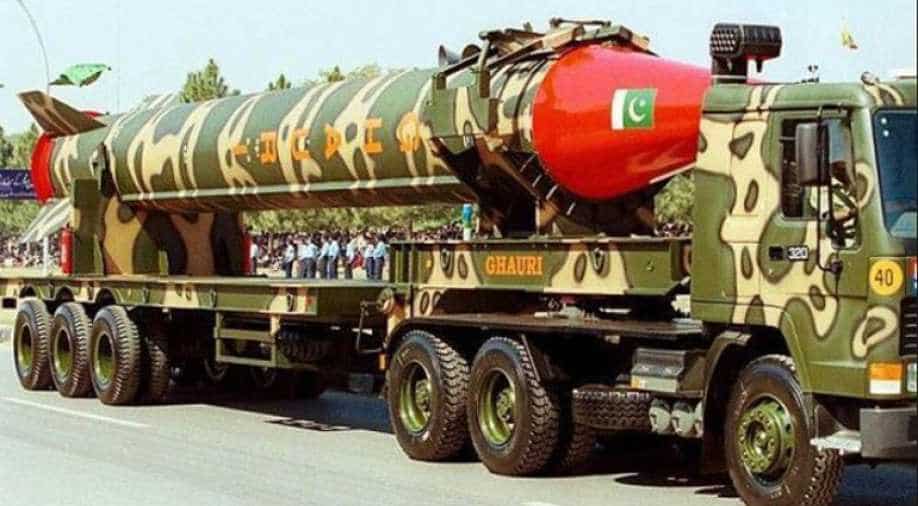 Pakistan is well on its way to amassing the world`s third largest nuclear weapons stockpile and its decision to deploy low-yield (5 to 10 kiloton) battlefield weapons, represents a dangerous new strategy that could have a telling impact on South Asia`s future stability, claims a military history and world affairs expert.

In an article written for the www.military.com website, Joseph V Micallef, a best-selling military history and world affairs author and a keynote speaker, warns that if Islamabad continues in this vein, there is every possibility of nuclear device or devices falling into the hands of militant jihadist organisations, both in Pakistan and in other parts of the world.

In his article, Micallef says, "Pakistan`s past ties to militant jihadist groups like the Afghan Taliban, Tehreek-e-Jihad Islami, Jaish-e-Muhammad, Lashkar-e-Taiba or Hizbul Mujahideen, to name a few, and the emergence of al-Qaida affiliated Ansar Ghawzat-Ul-Hind, have added an additional element of conflict into Indian-Pakistani relations."

"They have also led to a significant deterioration" in bilateral ties between Pakistan and the United States, he adds.

He says this conflict between Pakistan and India must be seen in a larger context, ie, expanded to a "larger rivalry between China and India in Asia and the Indian Ocean basin."

"The military intervention by the United States and its allies to defeat the Taliban in Afghanistan, and the role of both India and Pakistan in that conflict, have added a further layer of complexity between the two countries," Micallef maintains.

Micallef suggests that what concerns him most is that Pakistan continues to engage in a nuclear arms build-up, which it has been doing clandestinely and illicitly for the past 48 years, and that these arms could be accessed by rogue elements, both in Pakistan and abroad.

Between 1971 and 2016, Islamabad has been developing its own nuclear arsenal, "both plutonium and enriched uranium-based weapons."

"The specially designed centrifuges spin uranium hexafluoride gas at high speeds to increase the concentration of the uranium 235 isotope. This is the same technology that Iran had been using in its nuclear weapons program," Micallef states.

"There continue to be reports, however, that rogue elements of that (AQ&nbspKhan) network continue to operate clandestinely. According to unconfirmed media reports, as recently as 2014, the Islamic State (IS) reached out to former members of the Khan network for assistance in securing atomic weaponry," he says.

"While the design and construction of a nuclear device is very likely beyond the capabilities of al-Qaida, IS or any other militant jihadist group, the use of radiological dispersal devices, so called dirty bombs, is well within their capability," he cautions.

He also makes a worrying mention of China`s considerable help to Pakistan in supplying "a broad array of missile and nuclear weapons related assistance.

"The current stockpile is enough for an additional 200 to 250 weapons, depending on the warhead`s desired yield.&nbspAs of the end of 2017, Pakistan has enough HEU and plutonium to produce an additional 230 to 290 warheads. This number could be higher if Pakistan opts for smaller warheads intended for battlefield weapons. This would raise the Pakistani nuclear arsenal to between 350 and 450 nuclear warheads. Pakistan is adding enough HEU and plutonium to its stockpile to produce around 10 to 20 additional bombs a year."

Micallef mentions that since the late 1980's, Pakistan has used a variety of militant organisations as proxies in its ongoing struggle with India over Kashmir and elsewhere.

He certifies that the Pakistan Army`s Inter-Services Intelligence (ISI) sponsors, organises, trains and funds terror outfits operating from its soil such as the Lashkar-e-Taiba, al-Qaida, Lashkar-e-Omar, Jaish-e-Mohammed, Sipah-e-Sahaba, the Jammu Kashmir Liberation Front (JKLF), Jamaat-ud-Da`wah, Harkat-ud-Jihad al-Islami, the Haqqani Network, Jamaat-ud-Mujahideen Bangladesh (JMB) and the Afghan Taliban, and uses them as proxies for its covert military operations.

According to Micallef, since 1990, Pakistan`s military strategy has followed a three-fold approach:

(3) rely on the US&nbspand China, in particular, and world opinion in general, to restrain India from attacking Pakistan.

He says that the Indian Army has come up with a comprehensively developed "Cold Start," Doctrine to make its offensive capabilities more aggressive, while the Pakistani response has been to emphasize the development of so called "theatre nuclear weapons" to be in a position to meet the challenge of India`s rapid deployment forces with a series of limited nuclear strikes and then rely on international pressure to restrain India from escalating the confrontation into a full-blown nuclear conflict.

Micallef says it is important to note that Pakistan`s nuclear weapons are kept disassembled at separate facilities, which technically prevents a terrorist organisation from obtaining a functional nuclear weapon.

"The combination of a multi-branch command authority and the fact that the weapons are kept in a disassembled state makes it extremely difficult for rogue elements within Pakistan or for militant organizations to secure, divert or launch a nuclear weapon," he adds.

"Battlefield weapons, on the other hand, by their very nature, are more at risk for theft, diversion or unauthorized use," because while they are under the control of the national command authority, their actual use is left to the commander in the field.

He concludes by saying, "the future direction of Pakistan`s nuclear weapons policy is going to be a function of the state of Indian-Pakistan relations on the subcontinent. In turn, this will be shaped both by the state of US-Pakistan relations over the ongoing conflict with the Taliban in Afghanistan, as well as the broader challenge to India of China`s ambitions in Central Asia and the Indian Ocean Basin."