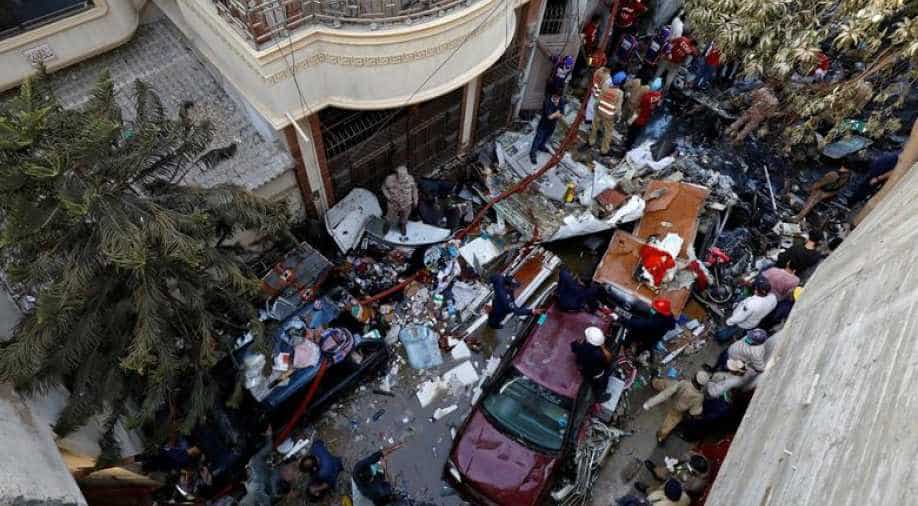 Zubair, 24, was among 99 passengers on board the Pakistan International Airlines (PIA) Airbus A-320 aircraft that plunged into a densely populated residential area near the airport here on Friday, killing 97 people, including nine children.

The PIA plane was flying very "smoothly" but while attempting to land, it "jolted" thrice and then the pilot "adroitly lifted" the aircraft off the ground, only to crash moments later, recounts Muhammad Zubair, one of the just two passengers who miraculously survived the fiery crash.

Zubair, 24, was among 99 passengers on board the Pakistan International Airlines (PIA) Airbus A-320 aircraft that plunged into a densely populated residential area near the airport here on Friday, killing 97 people, including nine children.

Flight PK-8303 from Lahore crashed at the Jinnah Garden area near Model Colony in Malir on Friday afternoon, minutes before its landing in Karachi's Jinnah International Airport. Eleven people on the ground were injured.

"The plane was coming very smoothly, 8303 of PIA. My seat was 8F. When it was reaching Jinnah International Airport, the pilot announced that 'we are landing, fasten your seat belts'. We fastened seat belts. While landing, the plane jolted three times. Then it came on the runway and was on it for a brief time. Then I don't know what happened, that the pilot adroitly lifted the plane off the ground," Zubair, who is being treated for burns in a hospital in Karachi, said.

"The pilot then flew the plane for 10 or 15 minutes. He again announced that the plane was landing. When this announcement was made, I looked down and it appeared to me that we were (flying) over the Malir Cantonment (area, where it was to land. Then when it was about to land, suddenly (it crashed)," he said.

"When I opened my eyes it was a dark place. I heard cries. I saw some light and tried to walk towards it after undoing my seat belt. There was fire everywhere and no one was visible," said Zubair from his hospital bed in a video clip circulated on social media.

He said when the plane had jolts everyone onboard was reciting Quranic verses.

Zubair also gave a statement on Friday in which he said that the plane started wobbling as it approached Karachi airport.

"The next moment there was a hard crash and I lost consciousness," said Zubair, adding that when he woke up there was 'smoke everywhere'.

The hospital administration said that Zubair sustained minor injuries and is currently under treatment at the burns ward.

The only other survivor of the crash was Bank of Punjab (BoP) Chief Executive Officer Zafar Masud.

He spoke to his mother on the phone and informed her about his health.

"As the plane was heading for landing, it hit something and I fell unconscious. When I regained consciousness, I heard people saying 'yeh zinda hai (he is alive)'. After getting treatment in hospital I spoke to my mother by phone and told her that I am well," Masud was quoted as having said by a doctor.

"Mr Masud departed for Karachi to celebrate Eid with his family. We all at the BoP family are happy that he miraculously survived. He is out of danger and being treated at a Karachi hospital," said BoP spokesman Asad Zia.

"Reached hospital and met Zafar Masud. It is a miracle he survived the crash he fell out of the plane after it broke into pieces. He was rescued by residents and brought to CMH Malir. He is undergoing tests. May Allah give him health," Senate Vice-Chairman Saleem Mandviwalla tweeted.

Masud sustained fractures to his hip and collar bones, the Darul Sehat Hospital's administration said, adding that there were no burn marks on his body, but only scratches.
According to the hospital administration, Masud's CT scan has been done and his condition is out of danger.