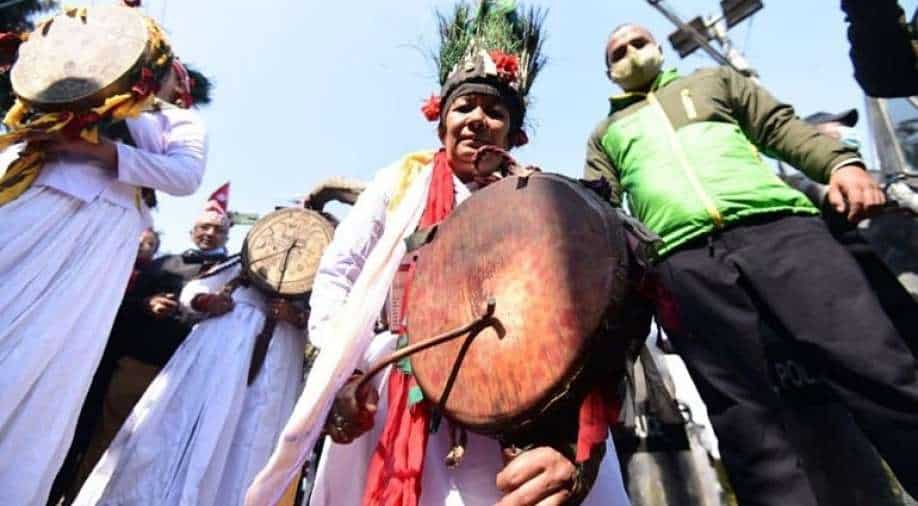 Protests in Nepal in favour of restoring monarchy Photograph:( ANI )

A pro-monarch march was held in the capital Kathmandu on Saturday where hundreds took to the streets with national flags to extend their support to a constitutional monarchy.

Hundreds of monarch supporters took to the streets in a pre-organised and well-advertised rally on December 5 demanding the reinstatement of constitutional monarchy and declare Nepal a Hindu state.

Participants of Saturday's massive rally chanted slogans in favour of the Hindu monarchy and demanded the reinstatement of constitutional monarchy in the Himalayan Nation which they claimed was for the sake of country`s national unity and well-being of the people.

"Today, participants are here without being driven by any impulsive feelings, as the movement led by youths has already set off. We can dream of our beautiful Nepal and this nation would obviously get back its monarch status of a Hindu-state. Until and unless we achieve our aim we would fight for it," Amir KC, one of the participants in the march who claimed to be leading over 250 youths from Lalitpur to the venue told ANI.

Saturday's demonstration comes as a series of similar protests were held in the past month for a constitutional monarchy.

On November 10, a group with banner "Nationalist Civic Society" staged a demonstration in Jamal of Kathmandu, demanding restoration of constitutional monarchy and announce Nepal a Hindu state. Two days later, a group named Nepal Scholar Council held a demonstration in Biratnagar with the same demands.

The trend of staging demonstrations in other parts of the country also continued to rise as a similar protest was held in Hetauda on 29 November under the banner "Restoration of Constitution Movement" and another protest on 30 November in Kathmandu itself.

Similar kind of protest was planned by Rastriya Prajatantra Party in Jhapa hometown of incumbent Prime Minister KP Sharma Oli in support of the monarch and monarchy.

Observers in Kathmandu claim movement to reinstate the monarch has arisen due to failed attempts of current political parties to cater to public interest.

"When democratic forces don't live up to expectations-- both ruling and opposition parties-- then it`s inevitable that some alternative force will try to take its place. That is how I see the revival of this protest," Biswas Baral, current affairs commentator in Kathmandu told ANI.

"Many people are unhappy with the working of the current government. It has been seen as a failure in controlling COVID-19, in controlling corruption and in implementing federalism. So, there is general disillusionment amongst people so this (protest) could be an expression of that," Baral said.

Protestors on Saturday displayed placards bearing a photo of Prithivi Narayan Shah, the founding father of modern Nepal along with national flags while they chanted slogans against the Federal Democratic Republican System that Nepal adopted in 2008 after the abolition of 240-year-old monarchy.

Nepal has transitioned into a federal democratic republic after the promulgation of a new constitution in 2015.

First General Election of 2017 held after promulgation charter gave a clear mandate to an alliance of the then CPN-UML and CPN (Maoist Center) incumbent NCP which is now in power.

Prime Minister KP Sharma Oli who since then has clung onto power with responsibilities to implement the constitution, strengthen federalism and good governance is now seen to be failing.