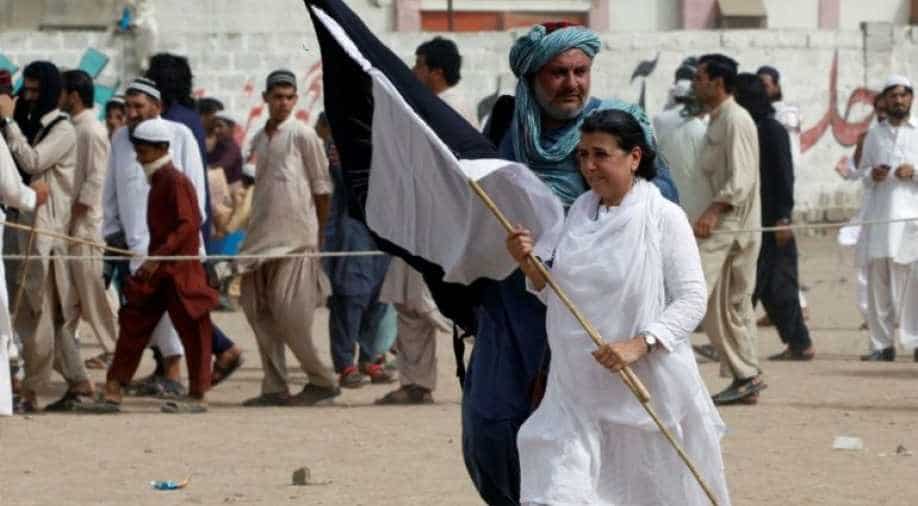 Ismat Shahjahan, organiser of the Pashtun Tahaffuz Movement (PTM) walks with flags at rally against, what they say, are human rights violations by security forces, in Karachi, Pakistan May 13, 2018. Photograph:( Reuters )

PTM, which drew nearly 10,000 people to its Karachi rally on Sunday, was founded in January in protest against alleged extrajudicial killings

As they were about to enter the office of the Commissioner of Karachi for a meeting to discuss a rally planned in Pakistan's largest city, leaders of a Pashtun-led rights movement were intercepted by armed men accompanied by paramilitary Rangers.

"A car with men in plainclothes pulled up in front of us and men with guns got out and told us to stand still," Said Alam Mahsud, an organiser with the Pashtun Tahafaz Movement (PTM), told Reuters.

He said three PTM activists with him were put in a truck and taken away by the armed men, as uniformed Rangers stood by. They returned two days later saying they had been interrogated, threatened, punched and kicked by the unidentified men, then handed over to the Rangers, who released them.

PTM, which drew nearly 10,000 people to its Karachi rally on Sunday, was founded in January in protest against alleged extrajudicial killings, arbitrary detention and "disappearances" of young Pashtun men.

Leaders of the emerging movement have blamed Pakistan's military for these abuses, in an unusually direct challenge to the country's most powerful institution.

Now, PTM's activists themselves have started disappearing, according to Mohsin Dawar, one of the movement's leaders.

The military's press wing did not respond to requests for comment on the allegations. In the past, the army has said it does not detain individuals without evidence.

Officials from the paramilitary Rangers, which are part of the security forces and have broad powers in Karachi, also did not respond to requests for comment. Neither did the office of the Karachi Commissioner, who is the head of the city government.

In the past month, PTM says dozens of its activists have been detained across the country, while newspaper columnists have had articles on PTM rejected. Some students and academics say they have been threatened and universities forced to call off talks about Pashtun inequality.

In the week leading up to the Karachi protest, PTM's leadership said Rangers and unidentified security officials detained and interrogated more than 100 of its supporters and kept nearly 30 workers in custody.

"The amount they are trying to stop us, it shows they are scared," student activist Manzoor Pashteen, who has become the face of the movement, told Reuters. "I don't think they know they are our guardians, their behaviour is that of criminals."

Despite the apparent crackdown, the protest in Karachi drew nearly 10,000 people. Pashteen himself was stopped from boarding a flight from the capital, Islamabad, to Karachi on Saturday after the airline told him his ticket had been cancelled, he said, adding it took him 40 hours to drive to the city after being stopped and detained several times while on the road.

While there has been no official action against the PTM, army chief Qamar Javed Bajwa said recently that "no anti-state agenda in the garb of engineered protests" would be allowed to succeed. His comments were widely interpreted as being directed at the group.

Many of Pakistan's 30 million ethnic Pashtun's hail originally from the borderlands with Afghanistan, where the Pakistani Taliban controlled swathes of territory until they were pushed out by military operations in 2009 and 2014.

PTM leaders say they do not want to challenge the government or undermine security, but complain Pashtuns - many of whom have moved to the cities to escape a near-decade long insurgency by Islamist militants - are unfairly targeted and suffer abuses at the hands of security forces in the name of fighting terrorism.

In April, a week before PTM was due to stage a rally in Lahore, Habib University in Karachi and the Lahore University of Management Sciences (LUMS) called off talks related to Pashtun rights organised by students and academics.

On the morning of the talks, both universities received calls from security officials, including representatives of Pakistan's spy agency the Inter Services Intelligence (ISI), telling them to cancel the discussions, faculty members said.

"Calls were made to the administration as well as in-person visits from people who identified themselves as ISI," said a LUMS professor. "I received a call and was told to refrain from anti-military activity."

Officials from the ISI did not respond to a request for comment.

At Habib University, the administration received visits from security officials and a call on the morning the lecture was due to take place, three different faculty members said.

Representatives from LUMS and Habib University did not respond to requests for comment.

Three students who had expressed support for PTM on social media told Reuters they had received threatening calls from unknown numbers telling them to stop, adding they knew of a dozen others who had received similar calls.

The same week, Punjab University professor Ammar Ali Jan said he was removed from his post for encouraging students to be vocal about human rights issues and supporting PTM.

Pakistan's minister for state and interior affairs, Talal Chaudhry, said such actions "by unnamed forces" were part of a wider clampdown on freedom of thought in Pakistan.

"We now have to listen to the people of Pakistan," Chaudhry said. "There have been very few such things in Pakistan's history where people come out on their own, to support a leaderless group," he added, referring to PTM.

Relations between the army and civilian government have been increasingly strained since the removal of former Prime Minister Nawaz Sharif by the courts last year, with some ruling party insiders accusing elements of the military of trying to destabilise it ahead of a general election expected in July.

The military, which has ruled Pakistan for about half its history, denies any interference in civilian politics.

Mohsin Dawar arrived in Karachi on May 6 and, along with other PTM leaders, began meeting local Pashtuns to plan the weekend rally.

"From the day we arrived they [the Rangers] began arresting our supporters," Dawar said.

People who provided PTM with logistical support, such as a place to hold their meetings, were picked up for five to six hours and threatened, he said.

"They told them not to support us that we will leave Karachi but they have to continue living here," Dawar added.

Karachi is where the killing of a young Pashtun, Naqeebullah Mehsud, by police in January sparked nationwide peaceful demonstrations about Pashtun rights, from which PTM emerged.

Organisers say they attempted to contract vendors to supply chairs, a stage, and a sound system for the rally, but none of the equipment was delivered.

One vendor, who asked not to be identified, told Reuters he received a call after meeting PTM members. "They said that if even one candle was delivered to the rally, my body would never be found," he said.