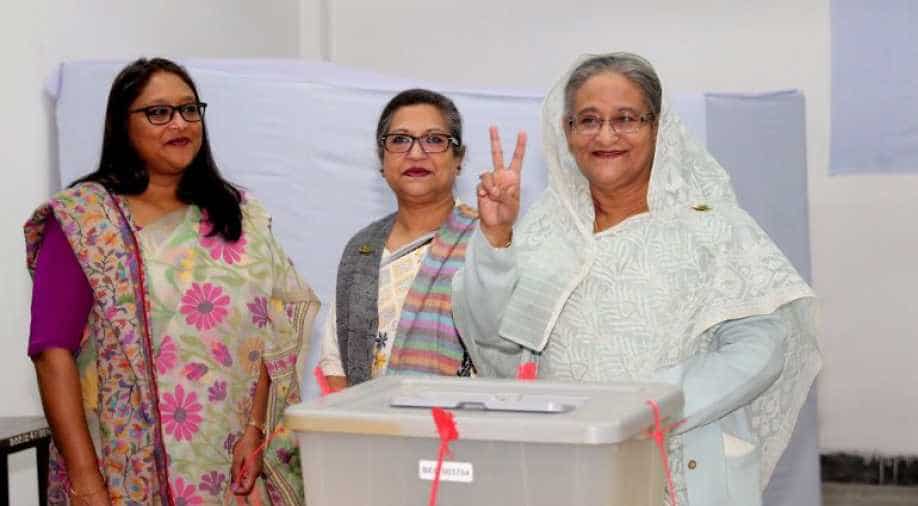 According to reports, the Election Commission confirmed the complete result of the constituency in southwestern Gopalganj from where Hasina won bagging 2,29,539 votes, while her BNP opponent got only 123 votes.

The Election Commission confirmed the complete result of the constituency in southwestern Gopalganj from where Hasina won bagging 2,29,539 votes, while her BNP opponent got only 123 votes.

Bangladesh went to polls on December 30 in a tense vote that saw at least 17 people killed in poll-related violence and demands of a fresh election by the Opposition.

Bangladesh's opposition NUF alliance, with BNP as its key partner, rejected the outcome of the general election and demanded fresh polls under a neutral caretaker government, news agency PTI reported.

"We reject the results and demand a new election under a neutral government," NUF convenor and veteran lawyer Kamal Hossain, who heads the Gono Forum party, told reporters.

"We ask that you cancel this election right away," Hossain urged the Election Commission, claiming, "we have reports that fraudulence took place in almost all centres".

Over 600,000 security personnel including several thousand soldiers and paramilitary border guards were deployed across the nation for the election in which 10.41 crore people were eligible to vote.

The voting started at 8 AM and ended at 4 PM. After 10 years, 39 registered political parties participated in Bangladesh's general polls. Over 1,800 candidates contested in 299 out of 300 parliamentary constituencies. As many as 40,183 polling centres and 207,312 polling booths were set up.